Can I fly to Omaha right now?

There are currently restrictions on flights to Omaha along with the rest of United States. Before you book or search for flights, consider the following restrictions: Entry restrictions

If you are looking to book a trip to Omaha and are outside of the restricted areas, please take the proper precautions and stay informed about traveling during COVID-19.
Hide COVID Travel Restrictions for Omaha

The cheapest ticket to Omaha found for each month in 2021 based on historical flight searches by Cheapflights users.

January
$258
February
$270
March
$295
April
$277
May
$307
June
$317
July
$327
August
$296
September
$299
October
$297
November
$275
December
$281
At the present moment the cheapest month to fly to Omaha is currently January; with July being the most expensive. Prices will vary depending on multiple factors such as booking in advance, airline and departure airports and times.

When is the best time to fly to Omaha?

January is typically the best time to fly to Omaha, but there are other times where great deals are available. If weather is an important factor for you when considering when to fly to Omaha, the warmest period tends to be July, with the wettest being May.

When is the best time to book a flight to Omaha?

The price you pay for your flight to Omaha may vary depending on when you book.For the best chance of a lower fare, look to book 14 days in advance of your trip. Fares are likely to increase a fortnight or so before your departure date.

Which day is cheapest to fly to Omaha?

The cheapest day to fly to Omaha is usually Tuesday. At the moment, Sunday is the most expensive.

What time of day is cheapest to fly to Omaha?

At the moment, flights in the morning are likely to offer the best value for money for your Omaha trip. A flight in the afternoon will more often than not be of higher cost.

Settled on the western bank of the Missouri River, this city was founded in 1854. Its seasonal climate means there’s no bad time to book a flight to Omaha. With a population of 400,000 it is Nebraska’s largest city, and has grown quite a bit since the days of the Oregon Trail journeys of the 1800s. Now, you can drive through the wildlife park, or see the military aircraft and missile museum.

Once the set of a 1938 Spencer Tracy ad Mickey Rooney film, Boys Town is an inspirational refuge for at-risk children under the age of 18. Places like this have brought both recognition and respect to Omaha’s already strong reputation as a leading city.

When you visit Omaha, make sure to stop by the Renaissance-infused riverfront. New foot paths that link to the Old Market District make this little area perfect for tourists who love to see the outdoors during the summer months. Twelve blocks of former warehouses have now been turned into restaurants and shops that are friendly, casual, and unpretentious.

Located at the bank of the Missouri and surrounded by rolling hills, Omaha enjoys a continental climate of warm summers and cold, dry winters. The east is the most humid, while the west is usually drier. Low pressure systems across the country make for rapid changes in weather once in a while, but most weather patterns are routine. Summers are sunny, and winters are snowy but mild.

Best Time to Fly to Omaha

If you travel to Omaha between May and September, expect beautiful skies, agreeable weather, and perfect conditions for exploring.

Summer (June to August) is the best time to book flights to Omaha, because the sun is out, the temperatures rise, and the weather is perfect for outdoor excursions and exploring the city by foot. Pack light clothing and sunglasses, and get ready to discover Omaha’s outdoors.

Fewer travelers visit here in the winter (December to February) because of the cooler temperatures and the freezing conditions, but if a cold, cloudy day doesn’t bother you, then you’re likely to find a cheap flight to Omaha and deals on hotels if you head here during the off season.

Inside city limits, the Metro Area Transit runs bus service throughout Omaha to other communities. Taxis are commonly used.

If you’re planning on expanding your Omaha travel, then consider taking the Amtrak train to a more distant location like Chicago or California, or one of the many Greyhound bus routes.

When you plan a flight to Omaha, you may not expect anything by way of the art world, but it does offer its own small selection of artistic gems. The Joslyn Art Museum’s limited collection holds art from the 19th and 20th centuries from both Europe and America. The west side of the building is dedicated purely to American art, filled with bold watercolors and prints documenting settler’s westward journeys in the 1830s. Special exhibits, free entertainment, and outdoor jazz festivals in the summer are more reasons to stop by.

For a truly inspiring addition to your Omaha travel agenda, make sure to visit Boys Town. Made famous by the 1938 film (Boys Town) the site is home to at-risk boys and girls (despite the name) who need shelter and structure in order to build a stronger foundation in their lives. Founded in 1917 by an Irish priest named Flanagan, Boys Town is set on a 900-acre village that allows the children to roam freely and even work on the land after school to develop an appreciation for earning. While it may seem out of the ordinary to tour such a place, the establishment is very welcoming to visitors, and is grateful for donations.

If astronomy is your thing, then check out the Strategic Air and Space Museum, where 40 military aircraft missiles and space craft hangars are on display. Bombers, cargo, troop transporters, and rescue helicopters are showcased.

If you’re an animal lover, then the Henry Doorly Zoo has everything you’re looking for. One of the world’s largest indoor rainforests is here, scattered with footpaths to explore and plenty of new species to discover. Waterfalls, ponds, and lush vegetation make the perfect homes for the monkeys and tapirs that roam. The Scott Aquarium gives a view of sharks from an underground tunnel, and the Hubbard Gorilla Valley is the most interesting of all – where humans are the ones confined, and the gorillas run wild and swing on human-made vines.

What airport do you fly into for flights to Omaha?

See alternative destinations where airfare is generally forecast to be close to Omaha flight prices. 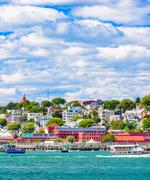 Cheap tickets to Omaha found by our users in USA as recently as May 11, 2021.

Other local departures to Omaha, Nebraska from United States

Not set on Omaha? See the cheapest flights to United States. Airfare prices updated on May 11, 2021.