Flights to Johannesburg in 2022

Cheap flights to Johannesburg in May, June 2022

The best prices found for JNB flights for May, June

Cheap flights to Johannesburg found for this year

Late deals on round-trip flights to Johannesburg, departing today and this week

Can I fly to Johannesburg from USA right now?

Information is based on travel restrictions from USA to Johannesburg

Most visitors from USA need to provide a negative COVID-19 test result and/or quarantine to enter Johannesburg.

Quarantine requirements
Visitors from USA are not required to quarantine after entering Johannesburg.

Documents
Health Declaration Form - Must be completed in 48 hours prior to arrival in South Africa.

Can I fly back to USA from Johannesburg?

Returning to USA from Johannesburg

Quarantine requirements
Visitors from Johannesburg are not required to quarantine after entering USA.

What is the cheapest month to fly to Johannesburg?

The cheapest ticket to Johannesburg found for each month in 2022 based on historical flight searches by Cheapflights users.

When is the best time to fly to Johannesburg?

Average Johannesburg flight ticket prices and weather conditions for 2022 and 2023 by month.

Although the strong winds of August sweep the city, most people book flights to Johannesburg during the winter months of June, July, and August to experience the cooler, drier part of the year. If you want to watch game, then visit between August and October. You’ll find cheaper flights to Johannesburg as well as less tourists.

While it’s hard to imagine an off-season in such a beautiful place, less travelers book flights to Johannesburg during the summer months of December, January, and February, because heat and rainfall make for sticky situations. Because of the season’s unpopularity, it just means you’ll have an easier time finding cheap flights to Johannesburg. Overall, your intended activities will best determine what time of year you should visit

Whale watching is best either between June and October or August and December, depending what kind of whales you want to see. You can also enjoy diving and surfing during April to September so the best time for your flights to Johannesburg is ultimately decided on what you want to do.

When is the best time to book a flight to Johannesburg?

If you’re not too concerned about certain activities then you’ll find cheap flight tickets easier to come by as you can just scout the prices over several weeks or months to determine when is best for you. If the dates you want to visit coincide with a special event or festival, make sure to book your flights to Johannesburg as early as you possibly can so you don’t end up spending more than you need to on flight tickets.

Which day is cheapest to fly to Johannesburg?

The cheapest flights to Johannesburg are usually found when departing on a Sunday. The departure day with the highest cost at present is Saturday.

What time of day is cheapest to fly to Johannesburg?

At the moment, flights in the afternoon are likely to offer the best value for money for your Johannesburg trip. A flight in the morning will more often than not be of higher cost.

Johannesburg’s southern latitude sets it in a subtropical zone, with a mix of high and low temperatures, and varying precipitation. The cold Benguela current makes for moderate temperatures on the west coast, and lots of precipitation during the summer months. Before you book your flight to Johannesburg, be aware that the seasons in the Southern Hemisphere are in opposition to the northern Hemisphere, so the seasons go as follows: Spring (September, October, November); Summer (December, January, February), Autumn (March, April May), Winter (June, July, August).

How long is the flight Johannesburg?

No matter how you schedule it, the flight to Johannesburg is a long one. Count on a 20-hour flight, give or take, if you fly nonstop from the few airports that connect directly to Jo’burg from the United States (JFK and Atlanta). Most flights to Johannesburg, especially if you’re pinching pennies, will have a stopover in London, Dakar, Zurich, Frankfurt, or other cities en route.

Which airlines fly to Johannesburg?

You can only fly nonstop to Johannesburg from the United States via SAA (South African Airways) and Delta, but plenty of other airlines can connect you to South Africa with one stopover on the way. Check out flights from British Airways, JetBlue, Emirates, Lufthansa and United, and see which connections make the most sense for your budget and schedule.

What should you pack for a flight to Johannesburg?

A trip to Johannesburg could mean cosmopolitan evenings or rugged treks, so pack the appropriate clothing for the activities you plan to pursue. If you plan to spend a lot of time outdoors, insect repellent is a must, and you may want to get a prescription filled for anti-malaria medication before you leave the United States. Remember that November through March constitutes the height of summer in the southern hemisphere, and pack lightweight clothing and an umbrella. Conversely, you’ll need warmer clothing during the winter months of June, July and August. Remember to pack the appropriate adapters and converters for all your electronics.

Getting to and around the city of Johannesburg?

The Reya Vaya is a bus dedicated for safe and affordable transport to the city from the airport and can be found from outside the arrival Terminal. There are other bus options to choose from but the Reya Vaya service is by far more reliable.

If you’re not too sure about where you are going or where you should disembark from the bus, it might be wise to take a taxi from the airport. Make sure you agree on a price before getting in, though, or for a guaranteed price make sure to use a metered taxi. On the upper levels of the airport you can find a new rail link between the airport and the suburbs, just follow the signs after your flight to Johannesburg lands.

After your flight to Johannesburg lands, hop aboard one of the airport shuttles, which are available for most hotel destinations. The rest of the city is maneuverable by taxi, by bus, or on foot. The safest way to travel is by calling a cab or hiring your own car. Johannesburg has bus routes to all corners of the city, and the main station is Park Station. Ticket prices vary by zones. Crime is often a problem on Johannesburg’s public transportation, especially on the Johannesburg-Pretoria line, so take care to travel in numbers and keep your belongings close. If you’re taking a taxi, it’s safest to hail a cab or call ahead from your hotel, as taxi lines are often hotspots for petty crime.

What are some things to do in Johannesburg?

For many decades, the South African system of apartheid kept travelers away from Johannesburg, and to the city’s credit, it doesn’t shy away from its past. Experience and learn more about apartheid by visiting the Apartheid Museum, which provides a full and honest view of the past. A trip to Mandela House gives you some insight into the life of Nelson Mandela. In fact, you can’t avoid Mandela throughout Jo’burg, where Mandela Bridge and Mandela Square are also popular attractions. A tour of Liliesleaf Farm shows you what it was like to be part of the fight against apartheid.

Johannesburg features all the shopping choices of any world-class city, but you may have the most fun heading for the open-air rooftop Neighbourgoods Market, where you can find locally sourced crafts and other items. Bryanston Organic Market is more than a local farmers market, also selling local art and books. Jozi’s mixed cultural heritage blends in British and Dutch influences from its colonial past, and you won’t find a more British way to while away an evening than visiting one of the city’s most popular pubs; check out Greenside, Illovo and Melrose Arch for cocktails and a chance to chat with the locals, and head to the Soweto Theatre for homegrown entertainment.

Just outside Johannesburg, a visit to the Cradle of Mankind lets you view fossils that trace back to the scientific beginnings of humanity. If you want to sample what being on safari is like, head to the Pilanesburg Nature Reserve or Kruger National Park.

Tips for your stay in Johannesburg

Apartheid Museum: Johannesburg has an incredibly tumultuous history. During the era of segregation, black folks were treated unfairly and inequality seeped from every establishment. The Apartheid Museum has you enter as either a black person or a white person. From the start, you continue to wander as whatever race you randomly draw, the philosophy behind it all forces you to put yourself in the shoes of those who lived through the painfully hypocritical time. Through media like film, text, audio, and live accounts, the past becomes alive. Exit through a garden, the final symbol of freedom, and take with you the impact of Johannesburg’s history.

Johannesburg Art Gallery: For those booking flights to Johannesburg in search of native art and the country’s true spirit, take a trip to the Johannesburg Art Gallery. The space at Noord Street and Joubert Park houses an extensive and impressive collection of both European and Southern African landscapes that capture the land’s people, spirit, and inner strength. More figurative paintings are on display as well as a growing contemporary section that draws crowds on a regular basis. The gallery also lets talented and voiced black artists show their retrospective feelings on the country’s progress.

Nelson Mandela Bridge: Standing tall above Newtown, the Nelson Mandela Bridge is a sight not to be missed. Officially opened on July 20, 2003, just a few days after Mandela turned 85 years old, the powerful structure is secured by cables and, like Mandela, serves as a gleaming symbol of effort to connect all sides. While not exactly an artist’s dream, what the bridge lacks in beauty it makes up for in dignity, glory, and pride. Don’t board your Johannesburg flight home without a trip to the influential bridge.

You can fly nonstop from Jo’burg all over the world. Of course you can head to Atlanta and New York nonstop, but Jo’burg is also a great jumping-off point for world travelers. Catch a nonstop to Amsterdam, Frankfurt, London or Madrid if you’re heading to Europe, or head to São Paolo, Brazil; Beijing, China; Mahé in the Seychelles, or Perth, Australia. Of course, flights from Johannesburg also connect you all over Africa, including to Accra, Kinshasa, Nairobi and Victoria Falls.

To get to Tambo Airport, Jo’burg’s international airport, you can catch the Gautrain, South Africa’s high speed train. Minibuses and taxis are also available, though it’s best to book ahead rather than grabbing a random choice on the street. Most major hotels also offer shuttle services to the airport.

See alternative destinations where airfare is generally forecast to be close to Johannesburg flight prices. 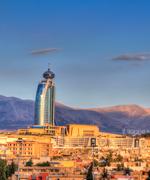 Cheap tickets to Johannesburg found by our users in USA as recently as May 19, 2022.

Other local departures to Johannesburg from United States

See all airports in Johannesburg, select one to find and compare flight prices.

Not set on Johannesburg? See the cheapest flights to United States. Airfare prices updated on May 19, 2022.