Can I fly to Bolivia right now?

There are current restrictions for travel to Bolivia at this time. These restrictions are for the safety of Bolivia citizens and travelers alike and are as follows: Entry restrictions

Bolivia has reopened its borders to commercial flights.

Travelers must present a medical certificate with a negative COVID-19 PCR test result issued within 7 days prior to arrival, certified by a Bolivian consulate.

Travelers without a medical certificate with a negative COVID-19 PCR test result are subject to quarantine.

If you must travel during this time and are allowed to based on current restrictions, please stay informed about updated travel safety tips.
Hide COVID Travel Restrictions for Bolivia

The cheapest ticket to Bolivia found for each month in 2021 based on historical flight searches by Cheapflights users.

January
$582
February
$646
March
$658
April
$643
May
$654
June
$674
July
$822
August
$658
September
$644
October
$604
November
$599
December
$876
Currently, the cheapest month for flights to Bolivia is January. The most expensive month for flights is December. The cheapest prices are shown above but prices will vary according to departure times, airlines, class and how early you book.

When is the best time to fly to Bolivia?

The best time to fly to Bolivia is during January, but great deals can be found at other times. If you are looking for warm weather when you arrive off of your flight to Bolivia then January is statistically the hottest. December is historically the period with most rainfall.

Which day is cheapest to fly to Bolivia?

At the moment, Monday is the most economical day to take a flight to Bolivia. Saturday is likely to be the most costly.

A trip to Bolivia is like traveling back in time – back to a time when the Incas ruled and indigenous languages were spoken. Although the Incas have long since gone and after them came the Spaniards, the mark they have left on the country is far from extinct.

Bolivia is the world’s 28th-largest country and it boasts almost twice as much land space as Texas. It is landlocked right in the middle of South America, sharing borders with Brazil, Paraguay, Peru and Chile. But despite being deprived of a beach-front like most of its neighbours, Bolivia’s breathtaking varied landscape and moderate climate more than makes up for it. The peaks of the Andes and lush rainforests seem to surround the country, providing active travelers with plenty of outdoor pursuits to keep them busy.

Bolivia was names after Simon Bolivar who was the leader of several sovereign movements in South America during the 1800s. He is credited with leading the fight for independence in the countries known today as Venezuela, Colombia, Ecuador, Peru, Panama and his namesake, Bolivia.

Bolivia has a high altitude and varied climate. The highlands are cold, the valleys are temperate and the lowlands stay warm. Winter lasts from June to September, and the rainy season from December to March.

Best Time to Fly to Bolivia

April through October is peak season for flights to Bolivia. It is the winter, however the weather is dry and generally sunny. It is the best time to visit for trekking.

November through March are off-peak months. Trekking is not possible during this time but most other travel to the country is still good. Weather varies depending on destination, especially with varied altitude.

There are a number of carriers for flights to Bolivia within the country and air is by far the most convenient and reliable means of transport. There is a regular service between La Paz, Cochabamba and Santa Cruz and all link Bolivia flights to smaller cities.

Taxis and micros (minibuses) are very popular and relatively inexpensive and can be used even for long distance travel.

The train service isn’t great in Bolivia. There are two major lines in the east and west of the country. However, only the ferrobus operates effectively. All other lines are very slow, though inexpensive.

Buses are the cheapest and relatively reliable means of travel, though breakdowns, especially in remote places, are not unusual. Roads are often poor and unpaved so driving can be tricky.

How popular are flights to Bolivia this year?

Bolivia has seen a 56% decrease in demand for flights to the country compared to last year.

See alternative destinations where airfare is generally forecast to be close to Bolivia flight prices. 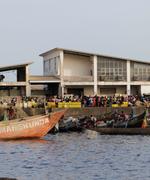 Select your preferred flight destination in Bolivia from the list below.

Select your preferred route to Bolivia from United States below

Not set on Bolivia? See the cheapest flights to United States. Airfare prices updated on May 15, 2021.