Flights to Buenos Aires in 2022

Cheap flights to Buenos Aires in May, June 2022

The best prices found for EZE flights for May, June

Cheap flights to Buenos Aires found for this year

Late deals on round-trip flights to Buenos Aires, departing today and this week

Can I fly to Buenos Aires from USA right now?

Information is based on travel restrictions from USA to Buenos Aires

Most visitors from USA can enter Buenos Aires without restrictions.

COVID-19 testing requirements
Visitors from USA are not required to present a negative COVID-19 PCR test or antigen result upon entering Buenos Aires.

Quarantine requirements
Visitors from USA are not required to quarantine after entering Buenos Aires.

Documents
Contact-Tracing App - Must be downloaded for a minimum period of 14 days.

Can I fly back to USA from Buenos Aires?

Returning to USA from Buenos Aires

Quarantine requirements
Visitors from Buenos Aires are not required to quarantine after entering USA.

What is the cheapest month to fly to Buenos Aires?

The cheapest ticket to Buenos Aires found for each month in 2022 based on historical flight searches by Cheapflights users.

When is the best time to fly to Buenos Aires?

Average Buenos Aires flight ticket prices and weather conditions for 2022 and 2023 by month.

When is the best time to book a flight to Buenos Aires?

To ensure you get the cheapest price possible for a flight to Buenos Aires, you should look to book at least 17 days in advance of your intended travel date. The price of your flight may increase if you delay and leave booking until a week or so before departure.

Which day is cheapest to fly to Buenos Aires?

At the moment, Wednesday is the most economical day to take a flight to Buenos Aires. Friday is likely to be the most costly.

What time of day is cheapest to fly to Buenos Aires?

To get the best value, try booking a flight in the evening when visiting Buenos Aires. Generally the prices will increase for flights in the afternoon as these tend to have higher demand.

Most people don’t strap on their tango shoes for their flights to Buenos Aires, but we guarantee that they’ve got a pair or two stowed away in their luggage: this South American city is sure to move the most left-footed tourists to the tips of their toes with the passionate throes of its native dance. A Buenos Aires flight nonstop from New York runs about twelve hours, so it’ll give you plenty of time to rest up for the vivacious, vibrant nightlife the city has to offer. Dance the tango that made Buenos Aires famous in the streets of San Telmo, the historic, cobblestone-covered quarter of the city. Squeeze in between screaming soccer fans at a smoky bar in Belgrano to watch the Superclásico, the game which pits two of Buenos Aires’ favorite soccer teams, Club Atletico River Plate and Boca Juniors, against each other for the most spirited match of the season. And if the complimentary meal served on your Buenos Aires flight doesn’t quite hit the spot, fear not: restaurants serve up empanadas, baked meat and vegetable dumplings, and world-renowned Argentine steak until the sun starts to rise over the shores of the Rio de la Plata.

The energy of “the Paris of South America” doesn’t disappear come daybreak: the money you save on your cheap flight to Buenos Aires will be well spent in Palermo, where porteños, or Buenos Aires residents, peruse the shady streets for treasure found in independently owned boutiques and art galleries. After buying a first edition Borges novel at a second-hand bookstore or a one-of-a-kind belt made of woven newspapers from an edgy boutique, mosey on over to La Boca, the birthplace of tango and arguably one of the city’s most heavily visited neighborhoods due to its vibrant, candy-colored walls. It’s here where you can whip out those tango shoes that waited so patiently throughout your flight to Buenos Aires, and dance the dance that made Argentina and the rest of the world fall in love with its illustrious capital city.

Cheap flights to Buenos Aires are hard to come by throughout the holiday season, when summer is in full swing in the southern hemisphere. With its mild winters, sultry summers, and temperate transitions in between, Buenos Aires makes for an ideal travel destination year-round. Summer hits halfway through November and doesn’t dissolve into fall until halfway through April, and the coldest weather in winter is encountered throughout the months of June and July.

Argentine Independence Day, July 9th, draws a huge crowd to the capital city for revelry and remembrance. With study abroad programs in Buenos Aires becoming more and more popular with high schools and colleges around the world, students will be booking flights to Buenos Aires for January, February and July in order to begin their fall semesters and spring semesters, respectively. The population of Argentina is predominantly Catholic, which is why Semana Santa (Holy Week) is observed for the week preceding Easter. Finding accommodations or cheap flights to Buenos Aires surrounding this period may be difficult, seeing as many Argentines abroad return home to visit and spend time with family.

Though the holidays will hardly bring about a Buenos Aires flight that won’t break the bank, celebrating under the Argentine sun is an experience worth every peso. Trade those wintry blues in December, January and February for a vacation full of long days that lead into nights at your favorite boliche (discotheque) that’ll inevitably conclude with breakfast at your favorite cafetería (coffee shop).

For travelers planning on a flight to Buenos Aires that’ll land them in a sun-drenched city on the autumnal cusp, book Buenos Aires flights for March or April before or after Semana Santa (Holy Week).

Getting around Buenos Aires, Argentina

The oldest subway in South America, the subte, is a quick, cheap and efficient way to get around Buenos Aires. The buses can take you anywhere, but it may not be worth the effort to figure out the routes. Buenos Aires is great to walk around, boasting lovely streets, plazas and parks. You can also grab a radio taxi, which is safer than street taxis. You can identify them by the plastic light boxes on their roofs. Make sure you know your destination’s address and cross street, as some drivers don’t know the city very well. You don’t need a car to get around the city, but if you drive, make sure you find out the rules of the road.

See alternative destinations where airfare is generally forecast to be close to Buenos Aires flight prices. 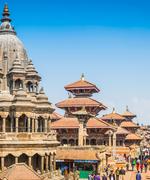 Cheap tickets to Buenos Aires found by our users in USA as recently as May 23, 2022.

Other local departures to Buenos Aires from United States

Not set on Buenos Aires? See the cheapest flights to United States. Airfare prices updated on May 23, 2022.