Flights to New Orleans in 2022

The best prices found for MSY flights for January, February

Cheap flights to New Orleans found for this year

Late deals on round-trip flights to New Orleans, departing today and this week

Can I fly to New Orleans Louis Armstrong from USA right now?

Most visitors from USA need to provide a negative COVID-19 test result and/or quarantine to enter New Orleans Louis Armstrong.

Quarantine requirements
Visitors from USA are not required to quarantine after entering New Orleans Louis Armstrong.


Can I fly back to USA from New Orleans Louis Armstrong?

Quarantine requirements
Visitors from New Orleans Louis Armstrong are not required to quarantine after entering USA.

The cheapest ticket to New Orleans found for each month in 2022 based on historical flight searches by Cheapflights users.

When is the best time to fly to Louis Armstrong Airport?

February through April is the peak season with the best weather and the city’s two biggest events, Mardi Gras and Jazz Fest. Book your New Orleans flights and hotel reservations at least six months in advance.

September and October tend to have good weather. The oppressive heat and humidity of summer even drives some of the residents away from the city, but you can find cheap hotels and flights to New Orleans.

The damp cold of winter does not attract many visitors, and low rates can be found.

Why you should take a flight to New Orleans

What’s the first thing you’ll notice after your trip to New Orleans? A city draped in vibrant colors and people dancing in the streets. The sounds of BB King, Winston Marsalis and Ella Fitzgerald make their way through the Big Easy as people pack the open-air restaurants and cafes in the French Quarter. It can only be New Orleans, and the journey to the most “unique city in America” starts on the New Orleans flight.

Despite the heartache it suffered on August 29, 2005, New Orleans has not lost its heart. Hurricane Katrina destroyed 80 percent of the city, but the New Orleans spirit prevailed. Beyond the depths of destruction was the music that for centuries kept this city alive. Today, tourists book flights to New Orleans to participate in the revival of one America’s most beloved cities.

Book airline tickets to New Orleans to see the beautiful architecture that still remains in the French Quarter of the city. Vacation in New Orleans for a taste of the Cajun cuisine that makes this city famous. Book New Orleans flights and hotel rooms to support the people – they stayed, they survived and they continue to provide the music, food and festivities that keep people traveling to New Orleans every year.

When is the best time to book a flight to New Orleans?

The best time to book flights to New Orleans is 31 days before your desired departure date. The cost of your flight will likely increase significantly if you book two weeks in advance of your flight.

Which day is cheapest to fly to New Orleans?

At the moment, Wednesday is the most economical day to take a flight to New Orleans. Sunday is likely to be the most costly.

What time of day is cheapest to fly to New Orleans?

New Orleans flights can be made cheaper if you choose a flight in the morning. Booking a flight at noon will likely mean higher prices.

How long is the flight to New Orleans?

Where can you get direct flights to New Orleans from?

How do you get from New Orleans airport(s) to the city center?

Set 11 miles from the city center, Louis Armstrong New Orleans International Airport provides different ground transportation options. You’ll find taxis located outside the baggage reclaim area on the first level. Buses also depart from the airport every 20 to 40 minute with bus pickup points situated outside Entrance 7 on the upper level (Concourse C Lobby Information Booth). Ride-sharing apps provide an increasingly popular option. You can use either Lyft or Uber to get a ride to your location. For a more luxurious drive, A-Airport Limousine provides transportation services, with service kiosks conveniently located in the Baggage claim area. Alternatively, if you prefer to drive, you can opt to rent a car. The car renting facility is situated close to the main terminal, down a covered walkway from the baggage claim exit.

What are some things to do in New Orleans?

A popular tourist destination, the city of New Orleans is famous for its infectious spirit, streetcars, jazz scene, rich cuisine, and distinct culture. A tour through the French Quarter ranks high on almost any tourist to-do list. One of the oldest in the state, the French Quarter is home to art galleries, restaurants, museums, and street performers. Swing by this historic St Louis Cathedral or visit Bourbon Street at night to experience the best of the city’s nightlife. Situated within City Park, the New Orleans Museum of Art makes an appealing destination for art enthusiasts and is conveniently located close to the Sydney and Wanda Besthoff Sculpture Garden. Nature lovers can go hiking at the Barataria Preserve or enjoy a guided tour with a park ranger. New Orleans also hosts over a hundred festivals and parades through the year, the biggest of which is arguably the Mardi Gras parade.

Do I need a passport or visa to fly to New Orleans?

A visa isn’t required to fly to New Orleans. Visa requirements only apply to non-US citizens. Although a passport isn’t technically mandatory for a domestic visit to New Orleans, traveling with one is recommended. The Transportation Security Administration requires that all adult travelers present government-issued photo identification such as U.S passport, military ID, or driver’s license at airport checkpoints.

New Orleans can be hot and muggy in the summer. Summer temperatures are well into the 90s (Fahrenheit), the humidity oppressive, and there are occasional thunderstorms. September and October often have clear, mild days. Winter is short, overcast, and chilly. Temperatures are usually in 50s, but can drop and, combined with the dampness, make for a cold day. Spring is delightful with sunny, mild days. The city gets plenty of rain, about 60 inches a year. The hurricane season is June to September.

Getting around New Orleans, LA

New Orleans has a great public bus system and the oldest streetcar service in the country, which has been designated a National Historic Monument. The buses are the cheapest way to get around, but they can be slow. Vintage St Charles streetcars can take you uptown while the Riverfront streetcar runs along the Mississippi River for two miles. Make sure you have exact change for the buses and streetcars. You can also get VisiTour passes that offer one to three days of unlimited rides on the streetcars and buses. The best way to get around at night is by hailing or calling for a cab. There are plenty of taxis to be found, and a metered ride won’t cost you much. If you want to take a tour of New Orleans, try hiring a cab to take you and up to four of your friends around the city. Head out on the water aboard the Canal Street Ferry for a great view of New Orleans’ skyline. The ferry is free for pedestrians and will take you out to suburban Algiers. It’s easy to drive in the city, but parking is another story.

Flights to Louis Armstrong International arrive daily from across the United States, with occasional flights arriving from Canada and South America. Some of the major airlines that operate at the airport include Continental Airlines, Delta, Frontier Airlines, United Airlines and Southwest Airlines among a number of others.

If you’re spending some time at the airport, you’ll be pleasantly surprised by the efficiency you’ll encounter here. Queuing won’t take up too much time, and staff are friendly and happy to help. There’ll be enough to keep you occupied, although if you’re waiting in Concourse D, then you’ll have to make do with limited refreshment options.

What airport do you fly into for flights to New Orleans?

Travelers will need to book flights to Louis Armstrong (MSY) if they wish to fly to New Orleans. The New Orleans airport is 11.4 mi from the city center.

How popular are flights to New Orleans Louis Armstrong (MSY) this year?

This year has seen a 84% increase in flight searches for New Orleans.

See alternative destinations where airfare is generally forecast to be close to New Orleans flight prices. 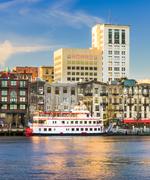 Find the best New Orleans flight deals for you

Cheap tickets to New Orleans found by our users in USA as recently as January 18, 2022.