Can I fly to Angola right now?

There are current restrictions for travel to Angola at this time. These restrictions are for the safety of Angola citizens and travelers alike and are as follows: Entry restrictions

Angola has restricted the entry of most travelers except for for Angolan nationals and residents. Exceptions are made for medical evacuations, movement of essential goods and services, for a small number of humanitarian flights, for the entry and exit of essential workers and the transportation of sick patients.

If you must travel during this time and are allowed to based on current restrictions, please stay informed about updated travel safety tips.

When is the best time to fly to Angola?

The best time to fly to Angola is during February, but great deals can be found at other times.

If deserts and plateaus are what you’re looking for, board a flight to Angola and head to the African country located along the South Atlantic. Angola is more than three times the size of California, but travelers booking Angola flights and accommodations won’t find any similarities here. Bordered by the Republic of Congo, Zambia and Namibia, Angola is mostly desert with forests sprinkled throughout the northwest region.

What keeps travelers booking cheap flights to Angola? The vast supply of the country’s oil. Angola is the second-largest oil producer in sub-Saharan Africa bringing in billions of dollars a year from around the world. It’s sometimes shocking for visitors on Angola flights, however, when they find some of the poorest people in Africa living in Angola. More than $4 billion in oil receipts has gone missing from the country’s treasury, according to the International Monetary Fund. Still, many people continue booking flights to Angola on peace-seeking efforts and try to reestablish the country’s economy. 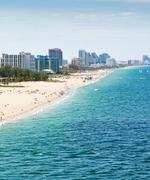 Select your preferred route to Angola from United States below