Flights to Zimbabwe in 2022

Can I fly to Zimbabwe from USA right now?

Information is based on travel restrictions from USA to Zimbabwe

Most visitors from USA need to provide a negative COVID-19 test result and/or quarantine to enter Zimbabwe.

Quarantine requirements
Visitors from USA are not required to quarantine after entering Zimbabwe.


Can I fly back to USA from Zimbabwe?

Returning to USA from Zimbabwe

Quarantine requirements
Visitors from Zimbabwe are not required to quarantine after entering USA.

What is the cheapest month to fly to Zimbabwe?

The cheapest ticket to Zimbabwe found for each month in 2022 based on historical flight searches by Cheapflights users.

When is the best time to fly to Zimbabwe?

Average Harare flight ticket prices and weather conditions for 2022 and 2023 by month.

What time of day is cheapest to fly to Zimbabwe?

You merely need to book a flight to Zimbabwe and immediately you’re transported to a place most people describe as “magnificent,” “exquisite,” or simply “beautiful.” Home to the wondrous Victoria Falls, grand wildlife preserves and the medieval ruins of Great Zimbabwe, there is much to do and see for any traveling type.

The Victoria Falls are undoubtedly the reason most travelers book flights to Zimbabwe. The country’s most popular tourist destination is also one of the greatest natural wonders of the world. Simply put, the Victoria Falls is a waterfall that plunges into the Zambezi Gorge. The cloud of mist created by this waterfall can be seen up to 20 miles away. The area around Victoria Falls is a haven for adventure seekers booking flights to Zimbabwe. Take a white-water rafting trip down the river, or stand on the bridge connecting Zimbabwe to Zambia and bungee jump into the Zambezi River gorge. If you need a break from all that adventure, take a relaxing scenic Zimbabwe flight over the area during sundown and view one of the most magnificent sunsets in the world.

It’s important to point out that Zimbabwe is a country dealing with ongoing political turmoil, but that shouldn’t deter tourists from booking flights to Zimbabwe and experiencing some of the most amazing scenery and first-class safaris in the world. Visitors are urged to use caution and common sense, but the main tourist areas, and national parks in particular, have been largely unaffected by the political debate. In fact, because of Zimbabwe’s recent drop in tourism, many travel companies are offering travelers cheap flights to Zimbabwe and bargain lodging prices in an effort to drum up business. Book a flight to Zimbabwe before everyone else does

Summer is Zimbabwe’s rainy season, but it’s hot and sunny from October to April, with temperatures nearing 90 F. Afternoon thunderstorms are frequent, especially during the rainy season. The Eastern Highlands are rainy all year long. Winters in the highlands have much more pleasant temperatures hovering around 70 F.

Best Time to Fly to Zimbabwe

If you found a cheap flight to Zimbabwe between May and September, you’re in for less heat and more game-viewing. The tropical conditions make high grassland plateaus the perfect place to spot wildlife.

Peak Season: Summer and winter swaps with the United States seasons, making May, June, and July the coolest months of the year. If you’re seeking cheap flights to Zimbabwe with a special interest in seeing Victoria Falls, head toward the end of summer: April, May and June leave the Zambezi River flooded, making accessing the Falls much more difficult.

Off-peak Season: The rainy season from November to March puts a damper on outings, but you’ll have an easier time seeing the country at its greenest, and finding cheap flights to Zimbabwe. Hoards of students roll in around South African school holidays in mid-April, and Nambian school holidays in December and January, so take their migration into consideration if you’re looking for a less crowded experience.

Between historical adventures, safaris, and national parks, trying to see everything may seem overwhelming. Fortunately, booking Air Zimbabwe flights will allow you to get to Harare, Bulawayo, and Victoria Falls without wasting precious travel time.

Train service is available for those seeking cheaper Zimbabwe travel. Overnight cars with sleeping compartments are slower than other methods, but are consistent and reliable. Watch your belongings though: petty theft is common among overnight trains.

For a more local experience, buses run quickly and inexpensively. Express buses are faster and more direct, but local ones are cheaper. Local buses, however, don’t run on concrete schedules, and operate from early morning to late afternoon. Zimbabwe Omnibus Company and Blue Arrow Luxury are coach companies that shuttle between the big cities.

Ferries, bicycles, and cars provide other great alternatives. Ferry service starts on Lake Kariba and connects with Mlibizi. Departure depends on demand, so get there early, but don’t expect a timely voyage. Bikes are great for shorter distances (although towns are typically a day’s ride away), and there are plenty of places to stop for refreshments, food, and emergency supplies should you need them. Roads are well-surfaced, and have been repaired in recent years, and the lack of wind makes riding effortless. Roads are better suited for bikers though, because renting a car is risky, since the vehicles are not always well maintained.

Hwange National Park: Settled in the Western side of Zimbabwe, the Hwange National Park boasts 400 species of birds and 107 breeds of other animals. If you’re booking flights to Zimbabwe with wildlife in mind, then head straight to this sanctuary where you’ll see wild animals roam in untouched nature. More than 30,000 elephants reside here, making it the most densely populated area for elephants in the country. If you’re booking flights to Zimbabwe between July and October, you’ll be privy to the animals loitering aimlessly around the waterholes.

National Art Gallery: For a truly artful experience, step inside the 100-year-old colonial building to learn the ins and outs of Zimbabwean history through finely polished sculptures and detailed paintings. Though some exhibits are temporary, you can always count on the classics to remain in the permanent exhibitions. Once you’ve meandered through endless halls of creativity, head downstairs to take a piece of it with you. If you purchase a print at the souvenir store, make sure to pack carefully on your return Zimbabwe flight to prevent it from being damaged. Just around the corner from the shop is a café with coffee, tea, as well as a studio where you can see artists at work.

Nayanga National Park: Nyagombe Falls, Africa’s second highest waterfall, lies 60 miles north of Byumba in the scenic eastern highlands of Zimbabwe. Upon entering Nayanga National Park, you’ll be overwhelmed by gorgeous views of Hones Valley that lead all the way into Mozambique. If you’re booking flights to Zimbabwe for the thrill of altitude, then hike the highest peak in the country, Mount Nyagani. Approximately three hours by car, it will end up being more like a day if you decide to brave it and walk. You can also visit the old ruins and Rhodes Museum which are also both onsite.

Politics: The political situation in Zimbabwe is one of severe unrest. Its 83-year-old president, Robert Mugabe, has remained in office for 28 years, transforming a prosperous nation into a starving, disease-ridden sprawl. Under his “Battle For Total Control,” his leadership has turned the lush, mineral-rich country with opulent terrain and a high standard of living into a dismal portrait of declined economy, unemployment, hunger, disease, and the world’s shortest average life span. More than 200,000 people in the country have been displaced for their opposition to Mugabe, and Western journalists have recently been banned. Stay aware of the political climate before you book your flight to Zimbabwe by frequently checking the US Department of State’s Web site.

Elephant Back Safaris: If you can’t get enough interaction with nature, elephant-back safaris will surely satisfy your wildlife aspirations. Hop on the back of an elephant and walk along the Zambezi River near Victoria Falls to view the environment through the eyes of its resident. Walks can take up to three hours and each elephant is paired with a personal carrier (called induna) who fosters the ride and communicates with the animal to ensure a simpler, safer process for you. Tours leave in the morning and afternoon, so plan wisely and reserve your time in advance. While you’re out there, take notice of the other species, like giraffes, zebras, hippos, and crocodiles.

See alternative destinations where airfare is generally forecast to be close to Zimbabwe flight prices. 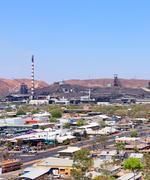 Select your preferred flight destination in Zimbabwe from the list below.

Select your preferred route to Zimbabwe from United States below

Not set on Zimbabwe? See the cheapest flights to United States. Airfare prices updated on May 25, 2022.