When is the best time to fly to Bulawayo?

For many, planning a holiday to Bulawayo is influenced by the weather conditions. The city has a humid subtropical climate, with three main seasons. There is a dry cool winter period from May to August, a hot dry period from late August to early November and a warm wet period, running from late November to April.

The warm wet season is generally avoided by travellers due to the increase in temperatures and rainfall. If you’re looking to save some money however, this can be the perfect time to look for a cheap flight to Bulawayo and off-peak accommodation rates.

In general tourists favour the drier season from May to early November. Plan a trip in the months of May to August if you would prefer slightly cooler temperatures which are on average between 7 and 23 degrees Celsius, or opt for a holiday in September to early November if you prefer high temperatures of around 27 to 29 degrees Celsius. Prepare to pay peak prices for flights to Bulawayo and hotel rates throughout this period. Other peak times in the area such as the Christmas holiday period, school holidays, special event festivals and sporting events are also likely to yield higher rates than usual.

Which day is cheapest to fly to Bulawayo?

At the moment, Friday is the most economical day to take a flight to Bulawayo. Tuesday is likely to be the most costly.

To get the best value, try booking a flight at noon when visiting Bulawayo. Generally the prices will increase for flights in the morning as these tend to have higher demand.

The second largest city in Zimbabwe, Bulawayo, is known locally as the City of Kings. After a flight to Bulawayo, you’ll find plenty to do, from relaxing in one of the many parks, for instance, Centenary, Barham Green, Hillside Dams Conservancy and Mabukweni, or visiting one of the many museums which can be found in the city, including the National Gallery, Bulawayo Railway Museum and the Natural History Museum of Bulawayo. The Ascot Mall is a great choice for some retail therapy and the Bulawayo Golf Club offers a sophisticated sporting facility for lovers of the sport. The Matapos Balancing Rocks are also a popular landmark for both locals and visitors alike.

Depending on your mood and culinary preferences you can enjoy fabulous international food and wine, or traditional Zimbabwean and other African dishes. At the Tendele Curio Shop you will find art, crafts, jewellery, textiles, carvings, paintings and artefacts. You will find a wide range of induna arts in the area. Travellers can sign up at Zulu Safari and Eco Logical Africa for a wilderness safari, designed to view local wildlife and get in touch with the natural world.

Once in the city, the public transport options are somehow limited. The train and taxis are the most convenient ways to get around. It is not recommended to tour the city on foot or bicycle, especially at night due to safety considerations.

Flights to Bulawayo arrive at Joshua Mqabuko Nkomo International Airport (BUQ), which is located about 6 miles (10 km) north of the city. Getting to the city from the airport is easy using rental cars, taxis, and airport shuttle buses. There is no bus or train service from the airport to the city. The Rovos rail luxury train stops in the city. 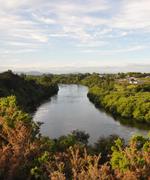 Prices found by our users for local departures to Bulawayo

Other local departures to Bulawayo