Flights to Prescott in 2021

Can I fly to Prescott right now?

There are currently restrictions on flights to Prescott along with the rest of United States. Before you book or search for flights, consider the following restrictions: Entry restrictions

If you are looking to book a trip to Prescott and are outside of the restricted areas, please take the proper precautions and stay informed about traveling during COVID-19.
Hide COVID Travel Restrictions for Prescott

The cheapest ticket to Prescott found for each month in 2021 based on historical flight searches by Cheapflights users.

January
$203
February
$219
March
$268
April
$249
May
$261
June
$289
July
$287
August
$247
September
$252
October
$258
November
$239
December
$217
January is currently the cheapest month to fly to Prescott. At this moment in time June is the most expensive month. These prices are determined by multiple factors and booking in advance can help keep costs down if your schedule is not as flexible.

When is the best time to fly to Prescott?

January is typically the best time to fly to Prescott, but there are other times where great deals are available. July sees the temperatures in Prescott peak to their warmest. March tends, on average, to see the most amount of rainfall.

When is the best time to book a flight to Prescott?

To ensure you get the cheapest price possible for a flight to Prescott, you should look to book at least 35 days in advance of your intended travel date. The price of your flight may increase if you delay and leave booking until a week or so before departure.

Which day is cheapest to fly to Prescott?

Friday is currently, on average, the cheapest day to fly to Prescott. Flying on Wednesday will result in higher flight prices.

What time of day is cheapest to fly to Prescott?

To get the best value, try booking a flight in the morning when visiting Prescott. Generally the prices will increase for flights in the evening as these tend to have higher demand.

How long are flights to Prescott Regional Airport?

Prescott Regional Airport, Ernest A. Love Field, is a small airport located in Prescott, Arizona, approximately in the center of the state.

United Express, a regional branch of United Airlines, is the only airline carrier that serves the airport.

The necessity of one connecting flight greatly impacts flight lengths for most travelers headed for Prescott, as nearly all departure cities will need to switch flights in either Los Angeles or Denver.

As a direct consequence, flight lengths will vary greatly, even from departure cities that are relatively close to Prescott because passengers will have to fly to either Los Angeles or Denver first. Layovers are also very common and can dramatically increase flight lengths.

Departure airports also impact flight lengths, as each airport has a different United hub airport—regardless of their proximity to Prescott Regional Airport.

San Diego International Airport’s United hub city is LAX, so flights can take as little as 3h 39m. Santa Ana flights out of John Wayne Airport have to Denver to switch flights, resulting in flight lengths that can easily exceed 20 hours and require a layover.

Even flights from nearby Phoenix take upwards of eight hours because passengers also have to fly into Denver; if two stops are required, flight lengths can easily exceed 15 hours.

Where can you get direct flights to Prescott Regional Airport?

Nonstop flights from Los Angeles or Denver both take under two hours.

How do you get from Prescott Regional Airport to the city center?

Prescott Regional Airport features an onsite kiosk for Hertz for easy car rental upon arrival. Several other car rental companies can be found just outside the airport, including Avis, Budget and Enterprise.

What are some things to do in Prescott?

Prescott is a true gem in the heart of the Grand Canyon State, rich in history, arts and culture, and the inimitable beauty of the American Southwest.

When Arizona was still part of America’s Old West, Prescott was a bustling frontier city, famous for Whiskey Row, which at one point in Prescott’s colorful history had 40 saloons.

During the days of the Old West, traversing Whiskey Row could be quite perilous; today’s visitors, however, can explore everything from historic saloons like The Palace, the oldest frontier saloon, a favorite of Wyatt Earp and Doc Holliday, to Matt’s Saloon, Prescott’s last true honky tonk bar. Eclectic shops and fantastic restaurants line the iconic street, including some of the most popular brunch places in town.

Visitors can also experience the Old West at one of the state’s most famous outdoor events, including Frontier Days, showcasing the World’s Oldest Rodeo. During this annual event, attendees can even witness mock shoot outs on Whiskey Row!

Prescott is more than just historic, however. It’s also home to a thriving, eclectic arts and music scene. Art shows and live music are staples in the city, from festivals throughout the year to monthly gallery artwalks and weekly live music downtown.

Museums are plentiful in Prescott, ranging from Native American museums and Cowboy art museums to the iconic Sharlot Hall. Art enthusiasts can also visit the city’s dozens of art galleries in the McCormick Arts District; most are open to the public daily.

Prescott Zoo, operated by the Heritage Park Zoological Sanctuary, features over 150 exotic animals, each rescued from all over the world.

Do I need a passport or visa to fly to Prescott Regional Airport?

What airport do you fly into for flights to Prescott?

Travelers will need to book flights to Prescott (PRC) if they wish to fly to Prescott. The Prescott airport is 8.1 mi from the city center.

See alternative destinations where airfare is generally forecast to be close to Prescott flight prices. 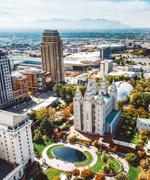 Cheap tickets to Prescott found by our users in USA as recently as June 21, 2021.

Other local departures to Prescott, Arizona from United States

Not set on Prescott? See the cheapest flights to United States. Airfare prices updated on June 21, 2021.