Can I fly to Tasmania right now?

Australia has restricted the entry of all travelers, with the exception of Australian nationals and permanent residents and their immediate family members, New Zealand nationals residing in Australia, diplomats accredited to Australia and residing in Australia and their immediate family members, and airline crew, a person recruited under the Government approved Seasonal Worker Program or Pacific Labour Scheme, a person who holds a Business Innovation and Investment (subclass 188) visa. Travelers who are not in an exempt category may request an individual exemption to Australia's travel restrictions using the Travel Exemption portal.

Travelers must present a medical certificate with a negative COVID-19 PCR test result issued within 72 hours prior to departure. Travelers must complete the Australia Travel Declaration form at least 72 hours before your departure for Australia.

Unless arriving on a quarantine-free flight from New Zealand, all travelers arriving in Australia, including Australian citizens, must quarantine for 14 days at a designated facility, such as a hotel in their port of arrival.​, at their own expense. For more information on quarantine rules in the Australian states, check the following websites: New South Wales, The Northern Territory, Western Australia.

Foreign nationals may transit through Australia if the connecting flight is within 72 hours of the arriving flight. They must either have a transit visa or be nationals of a visa-exempt country. Transit passengers don’t need to apply for an exemption to travel restrictions if they are booked to depart on a connecting flight from the same airport within 72 hours and they are not going to leave the airport. Travelers who plan to leave the airport before boarding their connecting flight or who will be at the airport for longer than 72 hours need to apply for a travel exemption here and will be subject to quarantine until their departing flight. Travelers from New Zealand and Pacific Islanders may not need a travel exemption. More information on transiting Australia is available here.

Travelers planning to travel across Australian state borders should note that some Australian states also have domestic travel restrictions, border restrictions, and quarantine requirements in place. In the case of onward travel within Australia, travelers are advised to check in advance with their travel/accommodation provider.

If you are planning to travel to Tasmania from an unrestricted area, please consider travel safety tips during this time.
Hide COVID Travel Restrictions for Tasmania

The cheapest ticket to Tasmania found for each month in 2021 based on historical flight searches by Cheapflights users.

When is the best time to fly to Tasmania?

Average Hobart flight ticket prices and weather conditions for 2021 and 2022 by month.

Flying to Tasmania in July is usually considered the best time to fly. However, you will find other deals are always available year round. January sees the temperatures in Tasmania peak to their warmest. December tends, on average, to see the most amount of rainfall.

Travelers taking cheap flights to Tasmania are spoiled for choice when it comes to destinations and activities. This small island is remarkably diverse and wonderfully wild.

Hobart, the capital, has the heritage as well as the stunning setting and, within a 90-minute drive, beautiful, bird-full Bruny Island and Port Arthur, the historic former penal settlement. Along the east coast – which has the mildest weather – the beaches are pristine, white-sanded and lapped by the bluest of seas.

Launceston, Tasmania’s second city, is in the north. It boasts the Cataract Gorge and, thanks to the bounty of the Tamar Valley, a reputation as a foodie city. Across the island, to the west, small villages give way to the Tarkine wilderness and the World Heritage Area, which accounts for about 20 per cent of Tasmania.

Tasmanians like to say that the island gets all four seasons in one day, but it has a mild, maritime, climate with plenty of rainfall. On the east coast, Hobart, for example, gets an average of 25 inches, making it Australia’s second-driest capital city (after Adelaide). The west coast gets four times that, about 94 inches per year.December-March are the warmest months with temperatures between 63 and 73 degrees. May through August is winter; temperatures hover between 37 and 52 degrees.

Best Time to Fly to Tasmania

Summer (December to February) is high season, when most travelers take cheap flights to Tasmania.

Winter – May to August – is low season.

The autumn and spring months – March and November – are shoulder season, but the weather can be unpredictable. However, if you brave the elements you can save on flights and accommodation.

See alternative destinations where airfare is generally forecast to be close to Tasmania flight prices. 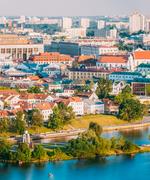 Select your preferred flight destination in Tasmania from the list below.

Select your preferred route to Tasmania from United States below

Not set on Tasmania? See the cheapest flights to United States. Airfare prices updated on June 17, 2021.