Are there currently restrictions on travel to Leeds related to COVID-19?

Yes, there are currently restrictions on flights to Leeds along with the rest of United Kingdom. Before you book or search for flights, consider the following restrictions: The United Kingdom has not implemented any entry restrictions, but is monitoring direct flights into the country from certain areas. Several airports have suspended certain services, closed terminals, and reduced transportation schedules, so check the details of the specific airport in advance. Additionally, many airlines have grounded their planes. Certain areas of the UK and Crown Dependencies may have specific travel regulations. Check the relevant page for information related to travel to Jersey, Isle of Man, Shetland, and Orkney. All travelers entering the United Kingdom must present a completed "Public Health Passenger Locator Form" to immigration upon arrival. The United Kingdom announced a mandatory 14-day quarantine for all travelers which started on June 8. Freight workers, medical professionals traveling to help with the fight against coronavirus, and travelers arriving from Ireland, the Channel Islands and the Isle of Man are exempt from the quarantine requirement. The UK government is updating a list of countries from which arriving travelers will not be required to self-isolate upon arrival, unless they’ve visited or stopped in any other country or territory in the preceding 14 days. Note: The English, Scottish, Welsh, and Northern Irish governments may be applying quarantine requirements differently. Check for more information on travel to England, Scotland, Wales, and Northern Ireland. All travelers on flights to the UK must wear face coverings on aircraft and on public transport upon arrival thereafter. Passengers using taxis and private hire vehicles should also use a face covering for the duration of their journey. Drivers may refuse to transport passengers who do not follow guidance for safe travel. Review the UK government’s entry requirements, and read more about travel restrictions for the UK. . If you are looking to book a trip to Leeds and are outside of the restricted areas, please take the proper precautions and stay informed about traveling during COVID-19.

January
$661
February
$645
March
$685
April
$663
May
$654
June
$881
July
$839
August
$693
September
$703
October
$667
November
$574
December
$729
Currently, November is the cheapest month in which you can book a flight to Leeds. Flying to Leeds in June will prove the most costly. There are multiple factors that influence the price of a flight so comparing airlines, departure airports and times can help keep costs down.

When is the best time to fly to Leeds?

Flying to Leeds in November is usually considered the best time to fly. However, you will find other deals are always available year round. July sees the temperatures in Leeds peak to their warmest. December tends, on average, to see the most amount of rainfall.

Striking an attractive balance between historic charm and modern flare, Leeds is one of the largest cities in the United Kingdom, with an impressive reputation to boot. Shopaholics will find a haven of vintage boutiques awaiting them in the Victorian Corn Exchange building, whilst those with an eye for detail will marvel at the Baroque-style Town Hall that dates back to the mid-nineteenth century. Millennium Square serves as a large public meeting place for locals and tourists to meet and enjoy the seasonal entertainment on offer. Cool off in the summer heat (if you’re lucky) by paddling in the water fountains or enjoy the friendly atmosphere whilst watching televised sporting events upon a large screen. Venture a little outside the city centre for the Temple Newsam House and Lotherton Hall. Favorably known as the Hampton Palace of the North, Temple Newsam is a wonderful example of a Tudor-Jacobean country mansion. At the Edwardian country estate Lotherton Hall visitors can enjoy a walk around the stunning gardens or a trip to the Bird Garden, home to over 200 species of our little feathered friends. ?

Best Time to Fly to Leeds

Offering events and entertainment all year round, it’s best to coordinate your visit in line with what interests you. For avid music fans, Leeds is a name synonymous with the contemporary rock and indie scene thanks to the internationally renowned music festival, which annually welcomes thousands of partiers during the UK bank holiday weekend in August. With previous headline acts including Biffy Clyro, Kings of Leon and Red Hot Chilli Peppers, it’s easy to see why this is a city that strikes the right chord with music lovers everywhere. During the winter months between January and February, Millennium Square is transformed into a public ice rink where people can try their hand at freestyle skating. Experience a taste of European festivity at Christmas time when the Square welcomes the German Christmas market stalls, specialising in traditional delicacies such as Glühwein (mulled wine) and Bratwurst (German sausage).

Once you have arrived in the city, you will find a variety of sights and things to do right at your fingertips. With most of Leeds’ top attractions within walking distance of the city centre or a short taxi ride away it’s simple to get around. 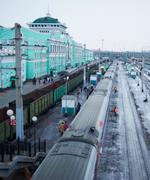 Cheap tickets to Leeds found by our users in USA

Other local departures to Leeds