Flights to Wellington in 2022

The best prices found for WLG flights for January, February

Cheap flights to Wellington found for this year

The cheapest ticket to Wellington found for each month in 2022 based on historical flight searches by Cheapflights users.

When is the best time to fly to Wellington Airport?

Average Wellington flight ticket prices and weather conditions for 2022 and 2023 by month.

Whilst there are several times of the year to choose from, August is seen as the time to fly to Wellington, however, it is possible to get good deals throughout the year. February sees the temperatures in Wellington peak to their warmest. August tends, on average, to see the most amount of rainfall.

Which day is cheapest to fly to Wellington?

The cheapest day to fly to Wellington is usually Monday. At the moment, Friday is the most expensive.

In 1865, Wellington replaced Auckland as the capital of New Zealand. Named in honor of Arthur Wellesley, the first Duke of Wellington, this capital city quickly became the heartbeat of New Zealand.

In 1865, the Old New Zealand’s capital city was Auckland. Now, it’s Wellington’s claim to fame. Luckily, those changes don’t affect the weather. Nothing really does in New Zealand. Your cheap flight to Wellington will most likely land you a mild climate, ranging from 40-70 degrees Fahrenheit, depending on the season, but with no real extreme you’re bound to be satisfied. Old Zealand, New Zealand; whatever you call it and whenever you fly, you’re sure to love the weather.

If you’re a traveler who prefers consistency, then you’re surely suited for the weather in Wellington. When packing for your cheap flight to Wellington, you won’t need to worry about bringing clothes for extreme weather, because you can rely on the mild temperatures, and infrequent precipitation.

Peak Season: Festivals galore begin in February and March, making the large span between November and April the perfect time to book flights to Wellington. The annual Wellington Fringe Festival, the biennial International Festival of the Arts, and the annual Dragon Boat Festival are top of mind for this time. Flights to Wellington promise a good time, and for sport-loving folks, make sure to catch the Summer Racing Carnival in late January where horse meets jockey.

Off-peak Season: Cooler temperature in May-August usually attract less tourists, so booking a cheap flight to Wellington during those times are perfect for the budget-minded tourist. Brave the wind and smile, because it’s worth the journey.

Getting around Wellington, New Zealand

Most of Wellington’s attractions can be reached on foot, but there are plenty of public transportation options as well. Trolleys can take you around inside the city, as can bright yellow City Circular hop-on hop-off buses that stop at major attractions. You can take cable cars, ferries and the After Midnight Bus Service to a number of areas and Stagecoach buses reach out to the suburbs. Biking is a popular way to enjoy the scenery. With all the public transportation options, you don’t really need a car unless you’re leaving the city.

Mount Victoria: If you’re a nature-lover, the east center of Wellington holds the perfect place for you. Mount Victoria, a hill near the Basin reserve, is home to many of the things that make Wellington so unique. The Wellington Hospital, the Greek Orthodox Church, the sports stadium, and the National War Memorial all make great reasons to stretch your legs after your flight to Wellington and go for a hike. Be sure to check out the government house in the south basin for some national pride.

Te Papa Tongarewa: If you’re idea of nature is a rustic bed-and-breakfast, rest easy: There is plenty to occupy your travel to Wellington. Take time at Te Papa Tongarewa (The national Museum of New Zealand) for a range of art, history, natural environment, and a taste of Pacific culture. The best part: It’s free. The museum offers free guided tours daily – and the word “daily” isn’t taken lightly around here: Te Papa is actually open every single day of the year, including Christmas and New Years.

International Film Festival: Some days, you just feel like hunkering down with popcorn and a movie. If you happen to book your cheap flight to Wellington during the last week of July or first week in August, then that’s exactly what you can do. The growing bazaar attracts crowds both local and international, celebrating native films and art houses as well as Peter Jackson’s blockbusters like Lord of the Rings.

Performing Arts: Between the National Orchestra, Opera, four theater companies, and National Dance and Drama center, you’re bound to fill your Wellington travel with creative energy. An array of venues like Downstage Theater, Circa Theater, Bats Theater, and Embassy Theater sell tickets to the arty extravaganza.

Wellington International Airport (WLG) was upgraded in recent years, just in time for the New Zealand Rugby World Cup (2011). The airport is situated in the Rongotai suburb of Wellington, just five miles (8km) from central Wellington, and commands spectacular views of the surrounding hills as well as the Cook Strait, which separates the North and South Islands of New Zealand.

As the third-busiest airport in New Zealand, Wellington is a great airport to use when arriving in New Zealand, particularly for passengers wishing to avoid the rush and bother of Auckland after a long flight.

What airport do you fly into for flights to Wellington?

Most people fly into Wellington (WLG) if they book a flight to Wellington. Wellington is conveniently located just 3.3 mi from Wellington’s city center.

See alternative destinations where airfare is generally forecast to be close to Wellington flight prices. 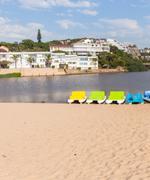 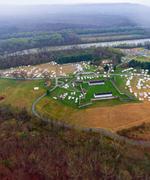 Find the best Wellington flight deals for you

Cheap tickets to Wellington found by our users in USA as recently as January 17, 2022.

Other local departures to Wellington from United States

Not set on Wellington? See the cheapest flights to United States. Airfare prices updated on January 17, 2022.