Cheap flights to Hanoi in May, June 2022

The best prices found for HAN flights for May, June

Cheap flights to Hanoi found for this year

Can I fly to Hanoi Noibai from USA right now?

Information is based on travel restrictions from USA to Hanoi Noibai

Most visitors from USA can enter Hanoi Noibai without restrictions.

COVID-19 testing requirements
Visitors from USA are not required to present a negative COVID-19 PCR test or antigen result upon entering Hanoi Noibai.

Quarantine requirements
Visitors from USA are not required to quarantine after entering Hanoi Noibai.

Documents
PC-COVID app - Foreign arrivals shall be required to make health declarations before entry and download and use the PC-COVID app during their stay in Viet Nam.

Can I fly back to USA from Hanoi Noibai?

Returning to USA from Hanoi Noibai

Quarantine requirements
Visitors from Hanoi Noibai are not required to quarantine after entering USA.

What is the cheapest month to fly to Hanoi?

The cheapest ticket to Hanoi found for each month in 2022 based on historical flight searches by Cheapflights users.

When is the best time to fly to Noibai Airport?

Average Hanoi Noibai flight ticket prices and weather conditions for 2022 and 2023 by month.

Which day is cheapest to fly to Hanoi?

The cheapest flights to Hanoi are usually found when departing on a Thursday. The departure day with the highest cost at present is Tuesday.

What time of day is cheapest to fly to Hanoi?

At the moment, flights in the evening are likely to offer the best value for money for your Hanoi trip. A flight in the afternoon will more often than not be of higher cost.

Hanoi ranks among the world’s most interesting cities to visit – a far cry from its unfortunate reputation as a political outpost during the Vietnam War. Originally called Thang Long (City of the Dragon), today’s Hanoi is a city of constant commotion always offering something of interest to the traveler.

Today, Hanoi serves as the transportation hub of the country. All flights to Hanoi arrive at its airport and travelers heading onward can board trains to further destinations in Vietnam or China. Before you board a Hanoi flight from home, take a look around and consider the impact one airport has on a city. During the Vietnam War, Hanoi’s transportation facilities were continuously bombed and bridges, railways and airports were destroyed. Hanoi’s reconstruction and resurrection as Vietnam’s travel hub serves as a tribute to the country’s determination to survive.

The humid, tropical climate of Hanoi produces sizzling heat. The summer time lasts between May and September, and normally calls for hit, sticky weather with heavy rainfall. June is the hottest, with temperatures staying steady in the 90’s. For optimum temperatures, book flights to Hanoi in autumn, when it cools down to a more tolerable level, and temperatures span between the 70’s and 80’s. Winter drops down to the 60’s, bringing cold wind and drizzle into March and April, but this is also the best time to find cheap flights to Hanoi.

To experience festive holiday atmosphere at its fullest, book a cheap flight to Hanoi during Tet, the lunar new year.

Peak Season: Summer time beckons tourists from around the world to bask in the sun and sweat with the locals between June and August. Outside of those roasting months though, January offers the celebration of Tet (lunar new year) that dresses the city in a guise of elegance, spirit and parties. Find a cheap flight to Hanoi in advance to ensure your spot in the action.

Off-peak Season: Because the city can be considered a year-round location, you can always find cheap flights to Hanoi, depending on your weather preferences. Fewer Tourists seek it out in the winter (except for Tet, in January), and March’s drizzle and chill leave most travelers yearning for the comforts of the indoors.

Getting around Hanoi, Vietnam

Save yourself the hassle of dealing with Hanoi’s traffic and crowds and take a taxi. Cab companies are very competitive, so service is prompt. All the taxis are metered and it’s easy to call a cab or hail one from a taxi stand. If you’re feeling adventurous, try a motorbike taxi. If you want to take it easy, have a tour operator, travel agency or local tourist café hire you a car or driver. You can also rent bicycles from any hotel or café in the center of town. Make sure the bike has a lock and bring a helmet. If you’re really brave, it’s easy to rent a motorcycle as well. Be careful on Hanoi’s busy streets. Motorcycle accidents are the leading cause of death and injury to foreigners in Vietnam. Walking can also be hazardous, so be aware of traffic and follow locals whenever possible. Try to keep a steady pace and don’t panic when crossing the street. You can flag down a cyclo (pedicab), but you’ll need to determine a fare before boarding. Avoid taking a cyclo at night though. It’s always a good idea to know where you’re going, and bring a map so you can point out your destination. Many cyclo drivers don’t speak English, and this will help both of you get where you’re going. Avoid the public buses altogether. They may be cheap, but they’re also slow, crowded and poorly labeled.

Cho 19-12: Nestled deep into the French Quarter of the city, and dating back to colonialism in the 1940s, this bustling street market between Pho Hoaw Lo and Pho Quang Trung brims with traditional residents and locals looking for food and small supplies. Smelling like incense and grilled meat, and thankfully not filled with tourists, Cho 19-12 is intriguing to walk through in the busy morning hours, and more hectic to deal with after noontime. Be careful what you taste test though, because Cho 19-12 is known for selling dog meat along with poultry and beef.

Museum of Vietnamese Women: In tribute to the female empowerment in Vietnam, the Museum of Vietnamese Women was erected in 1995 on the 65th anniversary of the Vietnam’s Women’s Union. If you’re not a history buff or a civil rights junkie, use your flight to Hanoi to freshen up on the events. Holding four floors of history, the building shows photos and artifacts of women who were involved with social reform and promotional party projects. Check out garments worn by female spies, and textiles woven by women in the early 1900’s.

Ngoc Son Temple: Located on Hoan Kiem Lake, this island-temple is dedicated to Tran Hung Dao, who defeated a force that was sent to invade Vietnam. Literally meaning “the jade mountain,” this spiritual ground now displays two alters devoted to physicians and scholars who have used their knowledge for the betterment of Vietnam. Further into the lake, cross the tiny footbridge to see the preserved remains of a giant six-foot turtle found in the lake years go. Amidst the beauty of the 14th century temple itself, the nature of the lake, and the 18th century surrounding buildings, are countless other hidden wonders of the Ngoc Son Temple.

The Old Quarter: If you’re looking to shop in traditional boutiques and family-owned markets, stop by Old Town and spend some of the money you saved by booking a cheap flight to Hanoi. A maze of streets that date back to the 13th century, this collection of unique business and local personalities teems of history and culture of Vietnam. While each street used to have its own specialized subject of trade, stores are now mixed together to form a hovel or merchandise and service where you’re sure to consume. Make sure you leave enough room in your baggage for your return Hanoi flight though, because you won’t leave empty handed.

What airport do you fly into for flights to Hanoi?

Most people fly into Hanoi Noibai (HAN) if they book a flight to Hanoi. Noibai is conveniently located just 14.2 mi from Hanoi’s city center.

See alternative destinations where airfare is generally forecast to be close to Hanoi flight prices. 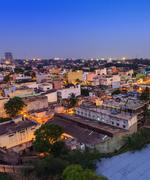 Find the best Hanoi flight deals for you

Cheap tickets to Hanoi found by our users in USA as recently as May 25, 2022.

Other local departures to Hanoi Noibai from United States

Not set on Hanoi? See the cheapest flights to United States. Airfare prices updated on May 25, 2022.