The best prices found for DUR flights for September, October

Cheap flights to Durban found for this year

The cheapest ticket to Durban found for each month in 2021 based on historical flight searches by Cheapflights users.

When is the best time to fly to King Shaka Intl Airport?

April is typically the best time to fly to Durban, but there are other times where great deals are available. January tends to be the warmest period in Durban so if you are looking for sun or warmer climates then look to fly around this time. February is the wettest if you need to factor this in to your plans.

South Africa’s third-largest city, beachside Durban is a lively, year round holiday destination. While the beach is certainly the focus for most visitors, the city’s shopping malls, bars and restaurants manage to draw travellers inland.

Located on South Africa’s east coast in the province of KwaZulu-Natal, travellers will find even more stunning scenery just beyond Durban’s city limits. To the north is the bustling coastal town of Umhlanga and to the south the Sapphire Coast, an endless sub-tropical paradise.

In the west you’ll find the Valley of 1000 Hills with its nature reserves and cultural villages. A little further a?eld lie Big Five game reserves and the mighty Ukhahlamba-Drakensberg Park.

Durban has a humid subtropical climate with hot, rainy summers and short warm, frost-free winters. In summer temperatures range from 28 degrees to 35 degrees while in winter the average temperature is between 20 and 23 degrees. The city is occasionally affected by tropical storms and cyclones from mid-November to late April.

Best Time to Fly to Durban

Like most South African cities the best way to get around is by car. Be sure to check that you have the latest updated street maps and/or GPS as a number of street names have changed in recent years. There is a commuter train service between Durban and the surrounding area as far as Stanger on the north coast, Kelso on the south coast, and Cato Ridge inland. The local bus service covers most of the beachfront and central residential areas and the larger Aqualine buses run through the outer metropolitan area.

Both metered taxis and minibus taxis can be found in the city. Metered taxis must be called and ordered to a specific location. Minibus taxis (combi taxis) are the main form of transport for those locals who can’t afford private cars.

Durban’s iconic Zulu Rickshaw pullers have been around since the early 1900s, but today the remaining rickshaws mostly cater to tourists.

What airport do you fly into for flights to Durban?

Travelers will need to book flights to King Shaka Intl (DUR) if they wish to fly to Durban. The Durban airport is 18.1 mi from the city center.

See alternative destinations where airfare is generally forecast to be close to Durban flight prices. 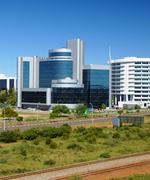 Find the best Durban flight deals for you

Cheap tickets to Durban found by our users in USA as recently as September 18, 2021.

See all airports in Durban, select one to find and compare flight prices.

Not set on Durban? See the cheapest flights to United States. Airfare prices updated on September 18, 2021.