Flights to Toulouse in 2021

Can I fly to Toulouse right now?

There are currently restrictions on flights to Toulouse along with the rest of France. Before you book or search for flights, consider the following restrictions: Entry restrictions

Travelers will need to complete a ‘sworn statement’ (déclaration sur l’honneur) form self-certifying they are not suffering from symptoms associated with COVID-19 and have not been in contact with confirmed cases in the preceding fortnight. Travelers must present a medical certificate with a negative COVID-19 PCR test result issued within 72 hours prior to departure. Children under the age of 11 are exempt from presenting a COVID-19 test result. Travelers arriving from outside of the countries listed above must have an Exempted International Travel Certificate to enter and transit France, showing that their travel is of an "essential" nature.

Travelers are subject to a 7-day isolation period and take another COVID-19 PCR test at the end of this period.

There are special regulations for travelers transiting through France to return to their country of residence. Only direct transit to reach your country of residence is permitted. Transiting travelers may not leave the international zone and will not be admitted to France. Luggage must be checked through to the final destination, and travelers will not be permitted to leave the international zone to collect and recheck baggage. The duration of transit must be less than 24 hours.

For travel to French Overseas Territories, please check the restrictions specific to the territory you're interested in visiting.

If you are looking to book a trip to Toulouse and are outside of the restricted areas, please take the proper precautions and stay informed about traveling during COVID-19.
Hide COVID Travel Restrictions for Toulouse

The cheapest ticket to Toulouse found for each month in 2021 based on historical flight searches by Cheapflights users.

When is the best time to fly to Toulouse?

Average Toulouse Blagnac flight ticket prices and weather conditions for 2021 and 2022 by month.

January is typically the best time to fly to Toulouse, but there are other times where great deals are available. July tends to be the warmest period in Toulouse so if you are looking for sun or warmer climates then look to fly around this time. May is the wettest if you need to factor this in to your plans.

Which day is cheapest to fly to Toulouse?

Thursday is currently, on average, the cheapest day to fly to Toulouse. Flying on Saturday will result in higher flight prices.

What time of day is cheapest to fly to Toulouse?

To get the best value, try booking a flight in the evening when visiting Toulouse. Generally the prices will increase for flights in the morning as these tend to have higher demand.

Toulouse appeals to all five senses: between the colors and textures of bright flowers, the scent and taste of local fare, and the sounds of the French language, you’ll be overcome by a rush of influence. Its location between the Atlantic and the Mediterranean and its role as the gateway to the Pyrenees mountain range is just another one of its outstanding features. The old capital of Languedoc, France’s fourth largest city, and the metropolis known as “La Ville en Rose” (City in Pink) keeps tourists flooding Toulouse time after time.

Aside from the many attractive tourist sites, Toulouse is also known for its proficiency in the aero-space industry. The Toulouse Space Center is headquartered here, driving in companies such as the Airbus and Aerospatiale. Steeped in aviation history, Toulouse is both the landmark of the first regular airline taking off of French soil, and also the birthplace of Clement Adler, the ‘Father of Aviation’. Despite its progression in the sky, Toulouse somehow managed to miss the Industrial Revolution of the 19th century, and has since been known as a sleepy, historical town balanced by universities and growth. Throughout the area are more than 300 different types of organs awaiting your arrival during the Annual Organ Festival.

Temperatures vary as seasons change, but there’s no bad time to book flights to Toulouse. November through March are the coldest and rainiest months holding temperatures in the 40’s, so most travelers visit the city between June and August, when the warmth kicks in and temperatures escalate to 75-85 degrees F.

Toulouse has an extensive public transport network of buses, tramways and metro. There is also an abundance of taxi companies available. If you would rather rent a car, bear in mind that the downtown area tends to be very busy and parking could be tricky – it might be better to rent a bicycle and explore the city at ease.

Jardin des Plantes: In the seventies, Jardin des Plantes was a hum-drum outdoor area with lackluster vegetation and little aesthetic value. In the eighties, it changed for the better. Now, its ecological surroundings welcome tourists booking flights to Toulouse to meander through the National Museum of Natural History. A variety of plants, including tropical breeds, are integrated through the manicured flora, and the entire mass is divided into sections: tropical gardens, Alpine gardens, rose gardens, botanical gardens, and climbing plants.

Canal du Midi: Just because Toulouse missed the Industrial Revolution doesn’t mean it missed its own engineering marvels. Between 1667 and 1694, Pierre-Paul Riquet designed a network of waterways to blend in with the surroundings of the town. Linking the Mediterranean to the Atlantic, the system is a structure of locks, aqueducts, bridges, and tunnels that connect and direct the water from one end to another. The technological innovation is seen as a modern spectacle in civil engineering, and the fact that it enhances the aesthetic landscape is one of its finest qualities.

Basilique St-Sernin: Consecrated in 1096, the largest and finest Romanesque church in Europe beckons religious enthusiasts to visit Toulouse, especially around Christian holiday seasons. The gorgeous Porte Miegeville opens to the south aisle, which is decorated with 12th century sculptures, and capitals that depict the story of Lazarus. Its double side aisles, five naves, and atypical Romanesque architecture are dotted with majestic columns, and an 11th century bas relief portraying Christ in His Majesty is one of the most renowned aspects of the establishment.

What airport do you fly into for flights to Toulouse?

For a flight to Toulouse, you will be flying into Blagnac. Toulouse Blagnac (TLS) is just 4.3 mi from the center of the city.

See alternative destinations where airfare is generally forecast to be close to Toulouse flight prices. 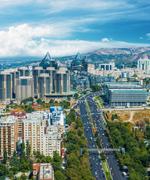 Cheap tickets to Toulouse found by our users in USA as recently as June 22, 2021.

Other local departures to Toulouse from United States

Not set on Toulouse? See the cheapest flights to United States. Airfare prices updated on June 22, 2021.