Can I fly to Chiang Mai right now?

There are currently restrictions on flights to Chiang Mai along with the rest of Thailand. Before you book or search for flights, consider the following restrictions: Entry restrictions

Thailand has suspended all normal commercial flights from entering the airport in Thailand, except for certain circumstances. However, the Thai Government organizes repatriation flights for Thai nationals to return to Thailand on a regular basis and certain air operators are permitted to operate semi-commercial flights to Thailand. Entry to Thailand is permitted for particular persons in the exempted list, including nationals and residents of Thailand, immediate family of a national of Thailand, diplomats, Non-Thai nationals who have a work permit, students, Non-Thai nationals who need to receive medical treatment in Thailand, including their accompanying persons, except for treatment for COVID-19, Non-Thai nationals who are permitted to enter the Kingdom under a special arrangement with a foreign country or have been granted permission by the Prime Minister. Thailand has also allowed foreigners to enter the kingdom by air under the Special Tourist Visa and Tourist Visa Exemption Scheme, for long-stay tourism purposes.

Travelers are subject to medical screening upon arrival. All travelers to Thailand are required to complete 14 days quarantine at a State Quarantine or Alternative State Quarantine (ASQ) facility. Thai public health regulations require that travelers who test positive for COVID-19 while in quarantine be transferred to a hospital for follow-up treatment and testing. Such individuals are required to remain in hospital until authorized for release by the public health authorities, often for at least 10 days. Travelers are responsible for all expenses related to this hospitalization.

If you are looking to book a trip to Chiang Mai and are outside of the restricted areas, please take the proper precautions and stay informed about traveling during COVID-19.
Hide COVID Travel Restrictions for Chiang Mai

The cheapest ticket to Chiang Mai found for each month in 2021 based on historical flight searches by Cheapflights users.

When is the best time to fly to Chiang Mai?

Average Chiang Mai flight ticket prices and weather conditions for 2021 and 2022 by month.

The best time to fly to Chiang Mai is during September, but great deals can be found at other times. April sees the temperatures in Chiang Mai peak to their warmest. September tends, on average, to see the most amount of rainfall.

Which day is cheapest to fly to Chiang Mai?

The cheapest flights to Chiang Mai are usually found when departing on a Saturday. The departure day with the highest cost at present is Friday.

What time of day is cheapest to fly to Chiang Mai?

At the moment, flights at noon are likely to offer the best value for money for your Chiang Mai trip. A flight in the evening will more often than not be of higher cost.

Chiang Mai may be Thailand’s second largest city, but it has a restfulness and beauty that is light years away from the bustle of Bangkok. Instead, it is a city nestled in the hills of northern Thailand which is filled with centuries-old Buddhist temples.

Anyone interested in art and culture should visit sights like the Wat Phra Singh temple, with its world-famous Lion Buddha image and walls that are covered in dazzling mural artworks. There are also fascinating museums to explore, such as the Lanna Folklore Museum.

Shopping is another highlight, and a trip to the market at Talat Warorot is an unforgettable experience (and a great place to buy unique souvenirs for those back home).

Although the city is a fine destination for history lovers, it also boasts a lively nightlife, courtesy of the thousands of students that it hosts, and party fans will feel at home right away. Chiang Mai is also a city of restaurants, from gourmet vegan curries to riverside diners, ensuring that all tastes will be catered for.

The area around Chiang Mai is filled with natural beauty and outdoor activities as well. Get to know some charismatic locals at the Patara Elephant Sanctuary, head out rock climbing under expert supervision or relax on a rafting expedition with a hamper full of food and drink.

There are adrenaline rushes to be had as well, with companies in Chiang Mai organizing whitewater adventures, as well as the “Flight of the Gibbon” park, which offers 33 different of zip-lines in beautiful surroundings.

And if all of that sounds like too much excitement, Chiang Mai is also home to several relaxation spas, providing traditional Thai massage.

With the area’s tropical climate, it’s important to pick the right season to visit. November is thought to be the ideal month to travel as temperatures hover around 30 degrees and the festival season gets into gear. Bear in mind that when festivals, such as Loy Krathong, are on hotel prices tend to rise. For a budget trip October or March might be just right.

Getting around Chiang Mai

For a quintessentially Thai experience, you can navigate the streets of Chiang Mai via tuk-tuk (a cross between a small van and a moped). They are plentiful and cheap, but be sure to arrange a price before leaving. Other options include vans with covered areas for passengers (known as “songthaews”), as well as privately rented cars. Cycle-powered “samlors” are also a common sight and a relaxing way to see the city.

What airport do you fly into for flights to Chiang Mai?

If you book a flight to Chiang Mai, you will be flying into Chiang Mai, which is the city’s only airport. Chiang Mai (CNX) is located 1.9 mi from the center of Chiang Mai.

See alternative destinations where airfare is generally forecast to be close to Chiang Mai flight prices. 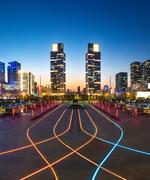 Cheap tickets to Chiang Mai found by our users in USA as recently as June 21, 2021.

Other local departures to Chiang Mai from United States