Can I fly to Bandar Seri Begawan right now?

There are currently restrictions on flights to Bandar Seri Begawan along with the rest of Brunei Darussalam. Before you book or search for flights, consider the following restrictions: Entry restrictions

Brunei has restricted entry and transit to all travelers except for citizens and residents. Brunei has also introduced an exit travel ban, including for permanent residents, and expatriate workers (green identity card holders), and their dependents. Exceptions will be considered by the Prime Minister’s Office on a case-by-case basis, through email applications to travelapplication@jpm.gov.bn giving 14 days’ notice of the intention to travel, and setting out reasons why they need to leave the country. Full details are available on the Prime Minister’s Office website.

Travelers from other countries who wish to enter Brunei may apply to the Brunei Immigration Department for special authorization to enter the country by downloading the form provided on the Department’s website at www.immigration.gov.bn. Travelers who have received prior authorization to enter Brunei are subject to a COVID-19 test at a cost of BND350, and will also be subject to a mandatory 15-day quarantine in a government-approved facility at their own expense. Upon arrival, travelers who are eligible for entry must present a medical certificate with a negative Coronavirus (COVID-19) test result issued within 72 hours of travel.

Travelers arriving in Brunei will be encouraged to download the BruHealth app. Travelers without the app may be barred from accessing a number of facilities. All visa issuances and exemptions are suspended.

. If you are looking to book a trip to Bandar Seri Begawan and are outside of the restricted areas, please take the proper precautions and stay informed about traveling during COVID-19.

When is the best time to fly to Bandar Seri Begawan?

Rainfall is heaviest in September to January and May to June with March and April being the warmest months. But in general there’s no distinct good or bad time to visit Bandar Seri Begawan. Weather is almost always hot and humid, and since Brunei is still off the beaten track where tourism is concerned there is no peak or low season. Prices remain consistent in terms of flights and hotel rooms year-round.

Which day is cheapest to fly to Bandar Seri Begawan?

At the moment, Tuesday is the most economical day to take a flight to Bandar Seri Begawan. Saturday is likely to be the most costly.

What time of day is cheapest to fly to Bandar Seri Begawan?

At the moment, flights in the morning are likely to offer the best value for money for your Bandar Seri Begawan trip. A flight in the evening will more often than not be of higher cost.

Bandar Seri Begawan (sometimes referred to as just “BSB”) is the capital city of Brunei, a tiny country located in the south-eastern region of Asia, on the Island of Borneo. Though small, there are several interesting things to see and do in BSB. Start with the Brunei Museum to get a better understanding of the country, culture and history.

Istana Nurul Iman (Palace of the Light of the Faith), is the official residence of the Sultan of Brunei. At two million square feet it’s one of the largest palaces in the world and includes 1788 rooms (257 of which are bathrooms). The opulent residence is only open to the public three days a year at the end of Ramadan but those wanting to catch a glimpse of the exterior can do so via water taxi.

Tasek Recreational Park is a short 15 minute walk from the centre of BSB and an ideal place to spend some time outdoors. The lush forest reserve has walking trails, picnic areas, and a waterfall. If you’re lucky you may even spot a proboscis monkey, a species of monkey that is only found on the island of Borneo.

A visit to Kampong Ayer is a totally unique experience to be had in BSB. The water village is home to a population of about 30,000 people and is the largest village of its kind in the world. The village (actually 28 contiguous stilt villages), consists of schools, medical clinics, a fire stations, and homes all sitting on stilts above the water. A water taxi is a great way to tour the area. Before or after a look at the village, head to the Kampung Ayer Cultural & Tourism Gallery to get more information about the area.

Getting around Bandar Seri Begawan

The majority of the main sights in Bandar Seri Begawan in the downtown area can be seen by getting around on foot. Otherwise, the bus system is a good option for visitors. There are six bus routes: the Central Line, Circle Line, Eastern Line, Northern Line, Western Line and Southern Line, which operate from early morning till evening. The tourist information center has bus maps to make getting around easier.  Taxis are often hard to come by so it’s best to stick with walking or the bus.

Getting to BSB from the airport (BWN) can be done by car, taxi or bus. Cars can be rented at the airport, taxies are available to take arriving visitors the short journey into the city, and buses serve the airport. 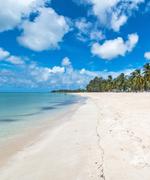