When is the best time to fly to Medina?

Many Muslims will want to time their visit to coincide with major religious festivals such as Eid, but the city can be extremely busy at times of festivities. The weather is hot all year-round, but cools off slightly between December and February (although expect blazing sunshine most of the time). The crowds should also be slightly smaller around those months, making it an ideal time to visit. For the best flight deals make sure you book outside of the religious holidays.

When is the best time to book flights to Medina?

Booking 46 days in advance of your planned departure date is, on average, the best time to get cheap flights to Medina. The general trend is that the closer you book to the departure date, the more expensive your flight will be.

Which day is cheapest to fly to Medina?

At the moment, Wednesday is the most economical day to take a flight to Medina. Friday is likely to be the most costly.

At the moment, flights in the evening are likely to offer the best value for money for your Medina trip. A flight at noon will more often than not be of higher cost.

The Muslim holy city of Medina is filled with architectural wonders, religious sites and museum exhibits that will fascinate and entertain any tourists.

Famed for being the site of the prophet Muhammed’s period of teaching, the city is often included in the Hajj – the Islamic holy pilgrimage. Nobody undertaking their own pilgrimage should miss the stunning Masjid Al-Nabawi mosque, where the prophet himself is buried, and which is one of the Islamic world’s most elegant buildings.

Aside from the Masjid, the city is also home to many other important religious buildings, like the ancient Quba Mosque – said to be the oldest in the Islamic world and the unique Masjid Al-Qiblatayn – whose prayer niche points towards Jerusalem, not Mecca.

Medina is also crammed with markets and shops selling souvenirs, food and clothes. Wander around the bazaar near the central mosque and snap up a unique prayer mat or delicately carved rosary beads, along with succulent dates from local fields. For essentials, the city is also home to plenty of luxury malls and boutiques as well, so all shoppers will be in their element.

The city has also become a culinary centre to match any in the world. Because pilgrims come from all over the world to visit the holy sites, Medina is full of restaurants serving everything from Bangladeshi to East African and Indonesian foods – allowing visitors to enjoy a world tour of cooking while they make their Hajj.

Medina is also a great place to organise day trips to other sacred cities like Mecca, as well as thriving modern Saudi locations such as Jiddah or Riyadh. With its cosmopolitan, but serene atmosphere, it is a fantastic destination.

Medina is not served by a public transport network, but the centre of town is small enough to walk around with ease. For longer journeys, taxis are the main method of transportation, and can be booked via hotel concierges. Buses regularly travel between the city and Mecca, Jiddah and Riyadh, and can be caught from the city centre.

Prince Mohammad Bin Abdulaziz Airport (MED) is not far from the centre of town, but there is no regular public bus service for visitors to use. Instead, most people arrive on organised tour holidays and use minibuses and coaches to get into town. Most hotels will offer shuttle buses for arrivals, but check beforehand if this is the case. If not, there are plenty of taxi drivers waiting to whisk you to your accommodation. 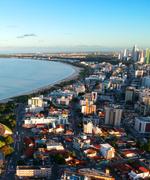 Prices found by our users for local departures to Medina

Other local departures to Medina