January
$402
February
$428
March
$423
April
$398
May
$360
June
$378
July
$391
August
$356
September
$363
October
$412
November
$442
December
$409
Currently, August is the cheapest month in which you can book a flight to Los Cabos. Flying to Los Cabos in November will prove the most costly. There are multiple factors that influence the price of a flight so comparing airlines, departure airports and times can help keep costs down.

When is the best time to fly to Los Cabos?

The best time to fly to Los Cabos is during August, but great deals can be found at other times. If you are looking for warm weather when you arrive off of your flight to Los Cabos then July is statistically the hottest. September is historically the period with most rainfall.

When is the best time to book a flight to Los Cabos?

The price you pay for your flight to Los Cabos may vary depending on when you book.For the best chance of a lower fare, look to book 1 days in advance of your trip. Fares are likely to increase a fortnight or so before your departure date.

Which day is cheapest to fly to Los Cabos?

Wednesday is currently, on average, the cheapest day to fly to Los Cabos. Flying on Friday will result in higher flight prices.

What time of day is cheapest to fly to Los Cabos?

Flights in the afternoon are typically the cheapest time of the day to fly to Los Cabos. Flights in the morning are usually the most expensive.

How long is the flight to Los Cabos?

Flights to Los Cabos, Mexico from the United States range from about 2h-20h. The length of your flight will depend on several factors, notably your departure city and the number and length of any stopovers you experience. Your flight will be on the shorter end of the range if you book a direct flight to Los Cabos, whereas those who have a flight with a stopover or two, particularly those flying from the northern reaches of the U.S., will likely have a flight time closer to the longer end of the range.

Where can you get direct flights to Los Cabos from?

How do you get from Los Cabos airport to the city center?

When you fly to Los Cabos, you’ll alight at Los Cabos Mexico International Airport (SJD), which is about 27 miles northeast of Los Cabos Cabo San Lucas. To reach downtown Cabo San Lucas from the airport, you can take a taxi, which will cost about $12-$15, with a journey time of about 34 minutes. Uber is also available in Cabo, though the price is generally higher than the airport taxi, making it moot. You can also opt to take a shared shuttle service from the airport to downtown Cabo, which will also take just over 30 minutes and cost about $16-$25. Check to see if your hotel provides a complimentary shuttle service, which is often the case in Cabo.

What are some things to do in Los Cabos?

Cabo San Lucas is located on Mexico’s west coast in the Baja Peninsula, a region known for its gorgeous beaches and thrilling attractions. While here, you can engage in a range of water activities, including snorkeling and whale watching, at several area beaches. Of course, it’s also perfectly acceptable to just lay in the sand and soak up the rays, too. Explore San Jose del Cabo town and enjoy unique shops, tasty street foods, and art walks. Get your heart pumping with a sensational zip-line ride over Wild Canyon, where you can safely fly over canyons and desert terrain from high above. Spend an afternoon at Cabo Pulmo marine park and swim with sea lions in the azure waters.

Do I need a passport or visa to fly to Los Cabos?

How popular are flights to San José del Cabo this year?

Searches for flights to San José del Cabo have seen a decrease of 51% this year. 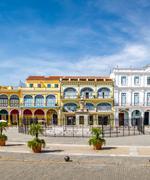 Other local departures to Los Cabos (SJD) from United States