January
$709
February
$608
March
$731
April
$619
May
$1056
June
$1132
July
$1235
August
$751
September
$519
October
$613
November
$596
December
$1091
Currently, September is the cheapest month in which you can book a flight to Zhengzhou. Flying to Zhengzhou in July will prove the most costly. There are multiple factors that influence the price of a flight so comparing airlines, departure airports and times can help keep costs down.

When is the best time to fly to Zhengzhou?

In general, the weather in Zhengzhou is welcoming and pleasant throughout the year. The city is most popular with visitors between the end of February and beginning of May, when moderate temperatures create the ideal setting for Zhengzhou’s annual celebrations. While this is the best time to visit Zhengzhou, it is also the most expensive.

June and July bring the hottest temperatures of the year to Zhengzhou, and with it, crowds lessen at local attractions. Those who don’t mind the heat will find plenty of discounts to enjoy on airfare and hotel rooms. On the other side of the spectrum, the coldest months of December and January also bring deep discounts to the city.

When is the best time to book flights to Zhengzhou?

The best time to book flights to Zhengzhou is 60 days before your desired departure date. The cost of your flight will likely increase significantly if you book two weeks in advance of your flight.

Which day is cheapest to fly to Zhengzhou?

The cheapest flights to Zhengzhou are usually found when departing on a Tuesday. The departure day with the highest cost at present is Monday.

At the moment, flights at noon are likely to offer the best value for money for your Zhengzhou trip. A flight in the morning will more often than not be of higher cost.

Set on the banks of the Yellow River, the capital city of Henan province is an economical, technological and educational powerhouse in the heart of China. With a history that dates back to ancient Chinese times, Zhengzhou is a great starting point for those who want to dive into China’s past.

One of the most attractive draws to the city is the famed Shaolin Temple, which is located just outside Zhengzhou. A day trip to the temple lets visitors explore the roots of a particularly popular martial art: Kung Fu. Also nearby are the majestic grounds of the Longmen Grottoes, home to a stunning collection of ancient Chinese art and Buddhist statues. This UNESCO World Heritage Site is made of thousands of caves, featuring statues carved directly into limestone cliffs. Both Shaolin Temple and the Longmen Grottoes are worth a day trip from Zhengzhou.

In the city, visitors won’t find an overwhelming amount of things to do, though the local cuisine is always a draw. Noodle shops and traditional Chinese pastries, known as Taosibao, are two of Zhengzhou’s calling cards. There is also the pyramid-shaped Henan Provincial Museum, with its array of ancient artefacts and pottery, as well as the Yellow River Scenic Area, a green space set along the river with tranquil sights of the water.

There is a public bus system that connects visitors with most of the local attractions, and fares are affordable. Air-conditioned and non air-conditioned buses are both available to the public. Taxis can also be hired for direct transportation to your destination of choice.

Getting from the Airport to the city

Zhengzhou Xinzheng International Airport (CGO) is the main airport serving the city. It is located about 23 miles (37 km) southeast of Zhengzhou. Shuttle buses connect passengers to local hotels and limited destinations in the city, while a public bus system also lets travellers easy move from the airport into Zhengzhou. Taxis are also available on site and can be hired around the clock. 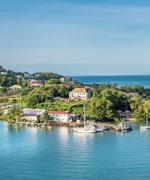 Prices found by our users for local departures to Zhengzhou

Other local departures to Zhengzhou