Who says there’s nothing quite like the real thing? From exact copies to inspired designs, faux versions of the world’s most famous landmarks are on display in every nook and cranny of the globe. And while we have a special place in our travelin’ hearts for all the originals, these 12 curious knock-offs also have us packing our bags.

Along Hume Highway in this Sydney suburb – only about 19 miles away from the real thing – sits a replica of the famed Sydney Harbour Bridge. Originally featured at the Sydney Cricket Ground during half-time at the 1987 Rugby League Grand Final, the small-scale copy of the bridge was built by apprentices from the Royal Australian Navy. Peter Warren, owner of Peter Warren Automotive in Warwick Farm, was at the game that day and decided to purchase the replica to span the entrance to his car dealership as a nod to the 1988 Australian Bicentenary. But the mini-bridge’s popularity later secured its spot as a permanent fixture in front of Warren’s business. 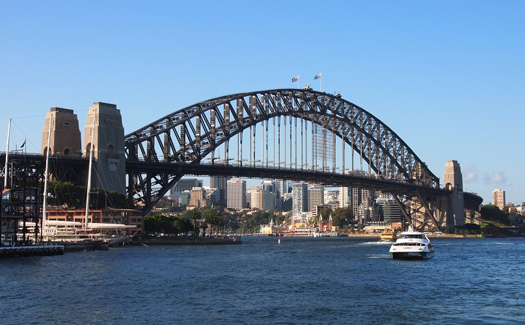 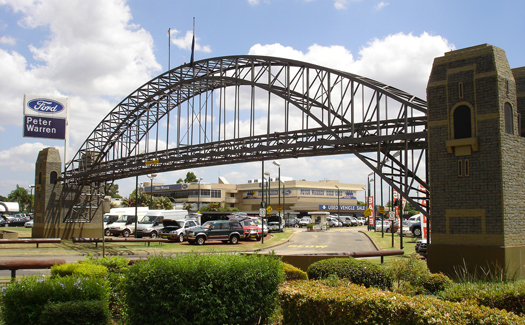 Mais oui, there is another Tour d’Eiffel deep in le coeur de Texas. In fact, more than 30 copies of the iconic French landmark have been erected around the world — from Filiatra, Greece to Durango, Mexico it seems everyone wants a little piece of Paris. But we’re tipping our chapeau to this decidedly Texan Eiffel Tower, which is topped with none other than a red cowboy hat. Built in 1993, the replica stands at 65 feet tall, making it about one-sixteenth the size of the original. The structure wasn’t initially dressed to impress, but after duking it out over height with another replica in Paris, Tenn., a red hat sealed the deal, crowning this Texas landmark the taller of the two towers. 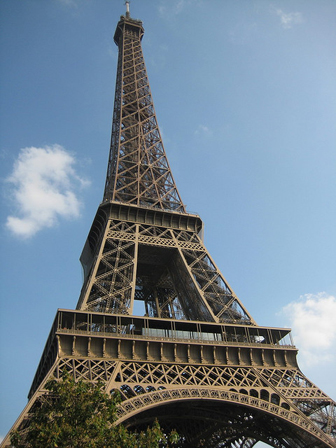 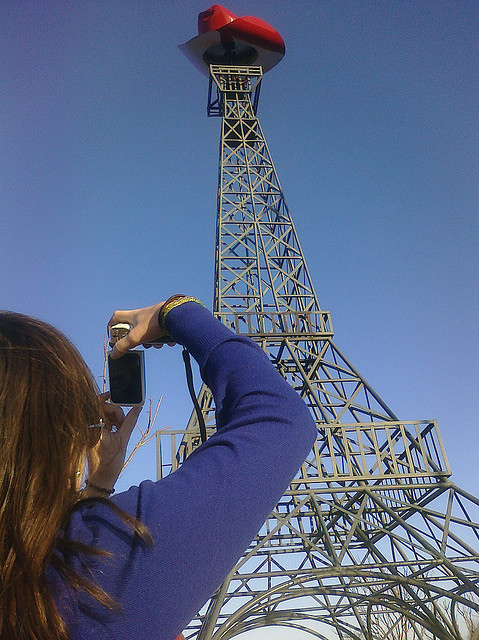 Hundreds of copies of Lady Liberty have been erected around the world — after all, who can resist her charm and quiet confidence? But a replica along Norway‘s west coast is of particular interest. Here, in the island town of Visnes, a particularly fruitful mine acted as the source of the copper used to create the original Statue of Liberty in New York. And so, a copy of the statue was placed here to pay tribute to the Vigsnes Mining Field and the symbol of freedom its copper went on to create. The replica is situated at the edge of a Norwegian fjord near the copper mine, which closed in 1972. 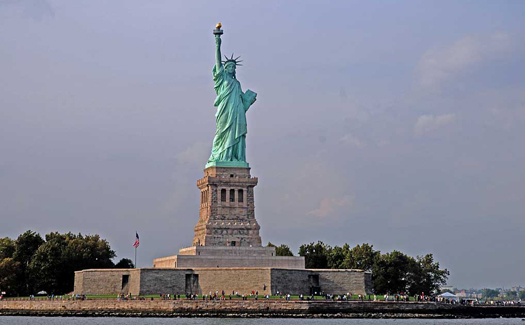 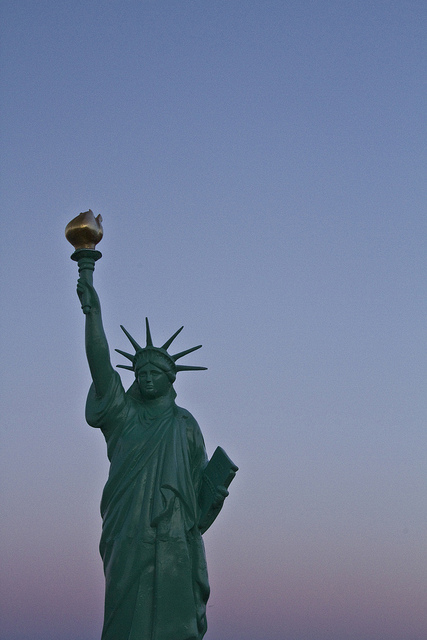 What supposedly started, in part, as a way to cover up some eyesores quickly became a roadside attraction about 15 miles northwest of Chicago. Businessman Robert Ilg reportedly constructed the Leaning Tower of Niles – a half-size replica of Italy’s Leaning Tower of Pisa – in 1934 to disguise water tanks that fed a few pools in the area, and to pay tribute to Italian astronomer Galileo Galilei. A fountain, reflecting pool and a few other items were then added to the site in the 1990s when Niles was named Pisa’s sister city. Standing at 94 feet tall (compared to The Leaning Tower of Pisa’s 177 feet), the tower is anchored by concrete and leans at a little more than 7 feet, about half the tilt of the original. Though some recent discussions have centered around the replica’s need for repairs, the tower still serves as another ideal backdrop for those looking to show off some bogus brute strength by “propping up” the tower in a photo. 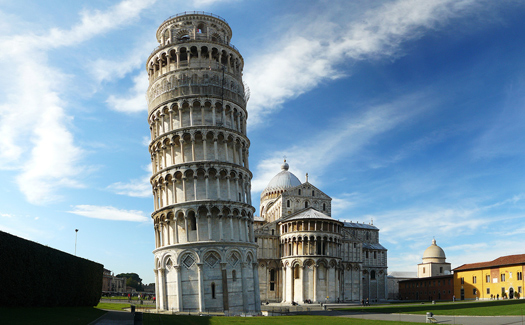 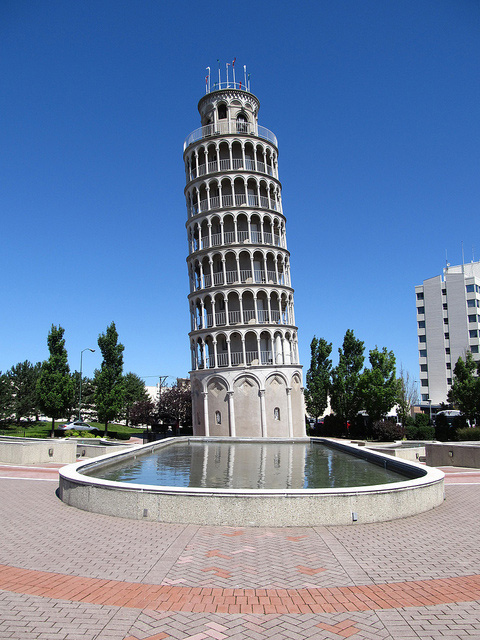 Washington, Jefferson, Roosevelt and Lincoln not only peer out from their post atop Mount Rushmore near Keystone, S.D.; they’ve also popped up halfway across the world in Chongqing, China’s Shaping Park. The park, which features replicas of other famous landmarks such as the Sydney Opera House and the Statue of Liberty, is a nod to Americans who helped the Chinese defeat Japan as the two countries battled in the mid-1900s. The carvings in China are slightly smaller than their 60-foot-tall stone-faced counterparts in South Dakota, but what they lack in height they now make up for in hair style — a few of the presidents on the Chinese replica have developed some rather lush green locks. 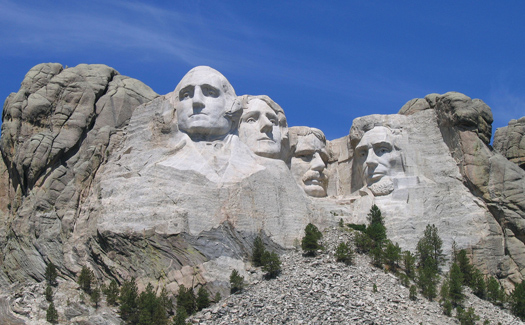 This clone of the Parthenon was first planted in Nashville‘s Centennial Park as a centerpiece for Tennessee’s 1897 Centennial Exposition. Now, the double of this landmark also serves double duty – as the city’s art museum – housing an extensive collection of American art as well as extra gallery space for rotating exhibits. As a full-scale copy of the Parthenon in Athens, this American clone also features a replica of the original building’s key focal point: a 42-foot statue of the goddess Athena. Great care went into making sure this Music City monument thoroughly matched its Greek counterpart — even the copies of the Parthenon Marbles are exact casts of the originals. 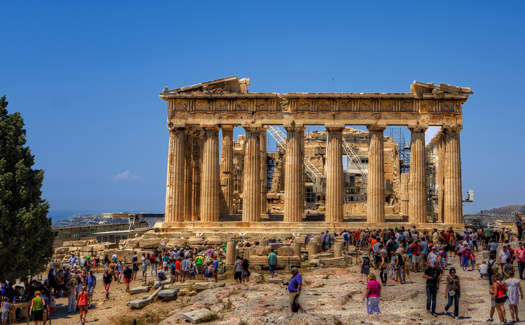 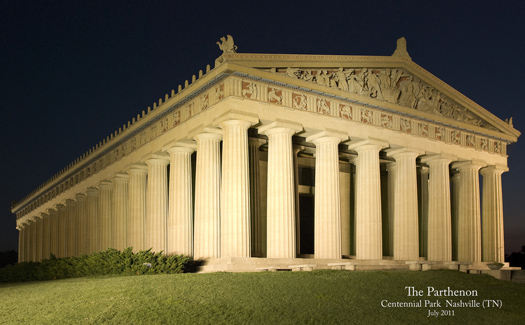 There may not be too many epic battles taking place in this near-copy of the Colosseum (perhaps just a war of words?), but the building’s architecture certainly seems to draw on all the drama of the Roman original. While not directly linked to the Colosseum, it’s hard to disconnect Moshe Safdie’s design from the Italian amphitheater. Vancouver‘s seven-story Colosseum-like library took more than two years to complete; it opened in 1995, houses 1.2 million books and features free Wi-Fi. The building is actually a rectangle within an ellipse and has a seating capacity of 1,200 — a far cry from the 50,000 to 80,000 spectators the Colosseum reportedly held. 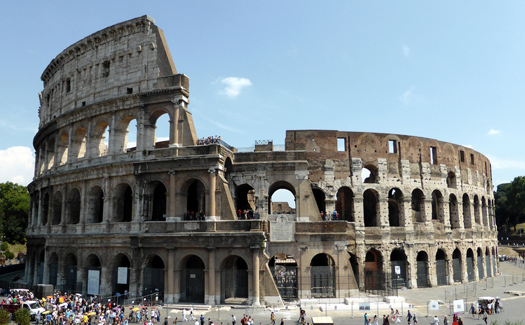 The real thing: The Colosseum in Rome, Italy (Image: smemon) 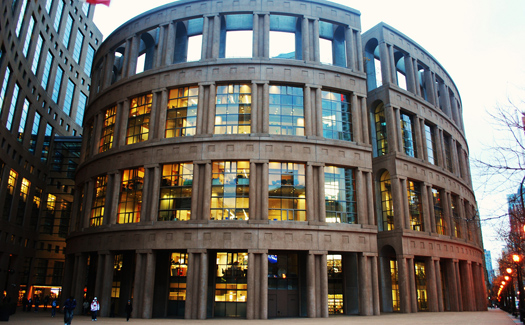 Creating a full-scale replica of a landmark as large and ornate as the Taj Mahal is no small feat (and did not go without controversy), but that’s exactly what filmmaker Ahsanullah Moni managed to do in his home country of Bangladesh. Using bronze, marble and granite from Italy and diamonds from Belgium, Moni set out to clone India’s impressive structure, creating a copy that spans four acres. Moni’s motivation to mimic the Taj was reportedly multi-dimensional: first to bring an iconic landmark to his country where many residents are too poor to travel, second to create a tourist attraction that would hopefully draw more visitors to Bangladesh, and finally as a piece of a huge movie set. Another replica, four times larger than the real Taj Mahal, is slated to be constructed in Dubai. 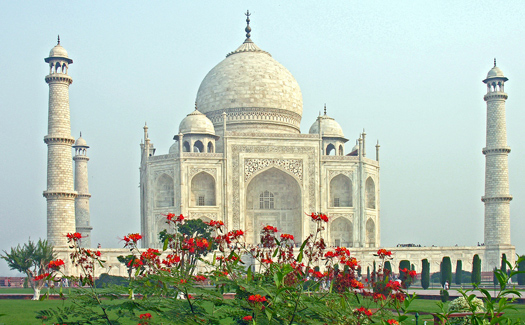 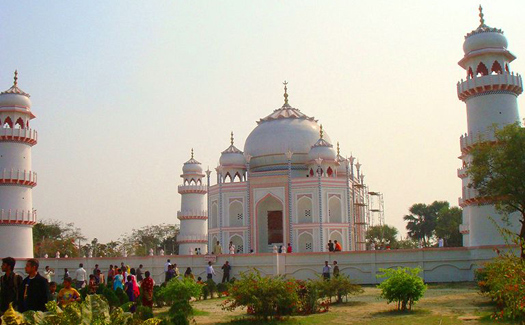 From Carhenge (near Alliance, Neb.) to Stonehenge Aoearoa (near Carterton, New Zealand) to Phonehenge (near Myrtle Beach, S.C.), the replicas of England’s Stonehenge are, perhaps, the quirkiest copies of any well-known landmark. But Foamhenge just might be our favorite “-henge” — a full-size copy of the one in Wiltshire, this Styrofoam clone in Virginia‘s Blue Ridge Mountains opened in 2004 and dons a paint job intended to match the original. Foamhenge was the brainchild of artist Mark Cline, who carved the pieces of foam to exactly mimic their English counterparts. The replica is also one of the few astronomically accurate Stonehenge copies, with the large foam “stones” set in the same position as the real thing. 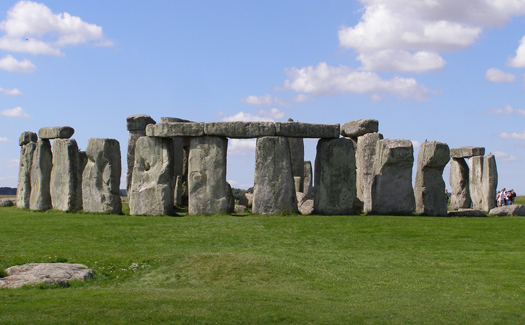 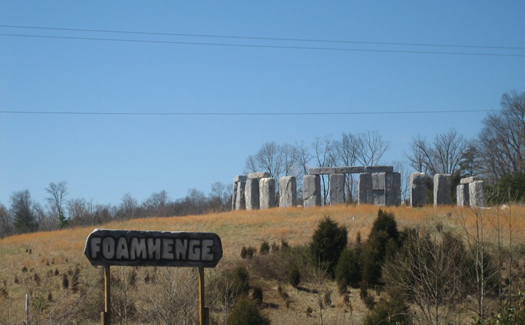 Inspired by Rio de Janeiro’s Christ the Redeemer statue, Lisbon’s Cristo Rei was built in 1959 as a nod to the heavens for having spared Portugal involvement in World War II. Just as Christ the Redeemer presides over Rio, this 90-foot-tall reproduction of Christ is perched over the Portuguese capital with its arms outstretched. An elevator inside the landmark’s base transports visitors to a viewing platform just below the statue (270 feet up) where you can take in panoramic views of Lisbon, including the Tagus River and the 25 de Abril bridge. 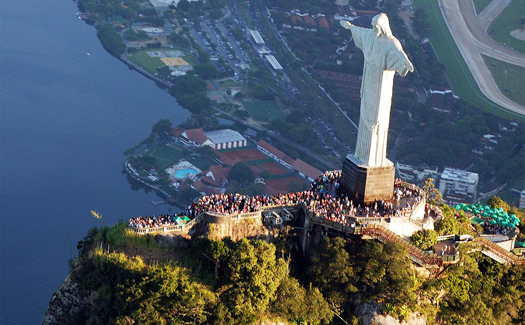 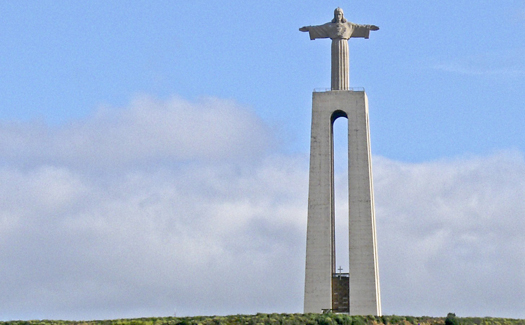 Copenhagen’s iconic Little Mermaid statue — inspired by a Hans Christian Andersen fairytale — has been mimicked around the world (with the copies collectively known as the “Mermaids of the Earth”). This Calgary-based copy is about half the size of the Copenhagen original. The statue depicts the central figure in Andersen’s tale — a mermaid who fell in love with a prince on land, procured legs from a sea witch in exchange for her voice, then had her heart broken when she couldn’t tell the prince her feelings and he pursued another woman. Both the original version of the statue and this copy were done by Danish artist Edvard Christian Johannes Eriksen, but the replica was bought by the Danish Canadian Club of Calgary and given to the city of Calgary in the 1970s. You’ll find the clone of this statue at the Calgary Convention Centre. 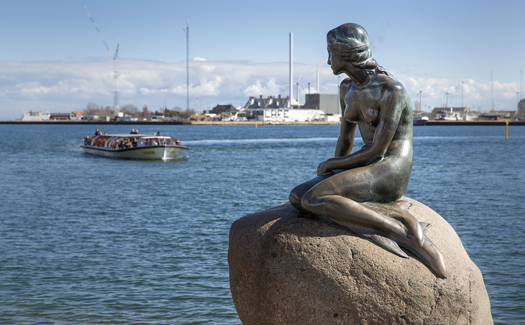 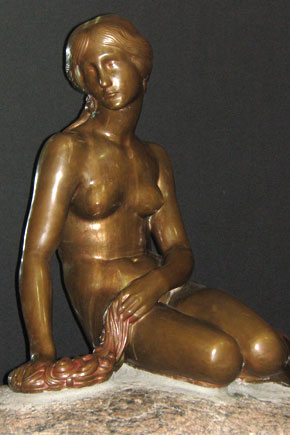 The replica: “The Little Mermaid” in Calgary, Alberta, Canada (Image: The City of Calgary)

London Bridge…outside London?! Yep, it appears London Bridge made its way across the pond. The original in England was replaced in the 1830s, but even that version of London Bridge began to go the way of the nursery rhyme that bares its name: It turned out London Bridge was, indeed, falling down, which prompted a search for someone who would purchase the iconic London landmark. The winning bid came from the founder of Lake Havasu City, Ariz., Robert P. McCulloch. And so, for a mere $2,460,000, the old London Bridge was dismantled, transported to Arizona, reconstructed in Lake Havasu City and rededicated in 1971. 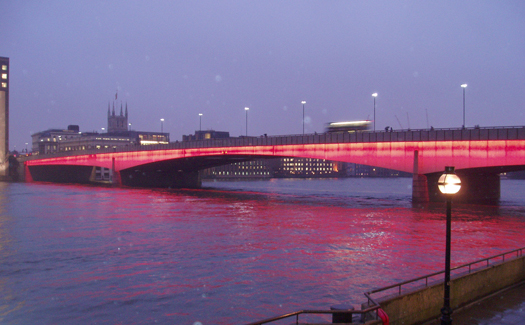 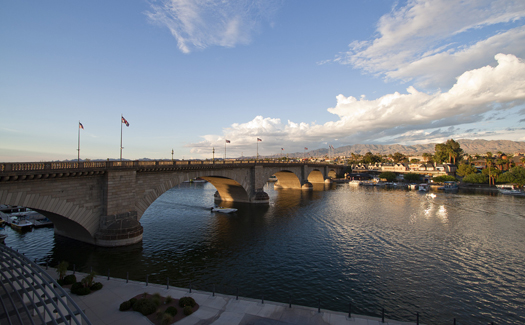 Looking for a one-stop-shop for replica viewing? Give one of these destinations a go: 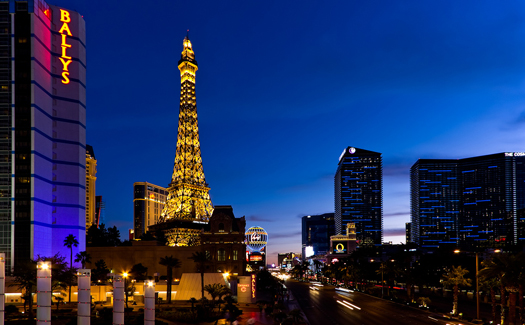 A replica of the Eiffel Tower presides over the Las Vegas Strip (Image: pedrosz used under a Creative Commons Attribution-ShareAlike license)

Window of the World, Shenzhen, China