While most travelers see the world’s natural wonders by land or sea, a growing number are choosing to experience them by helicopter.

The past few decades have seen an increase in leisure helicopter trips, which give travelers a breathtaking perspective not attainable by merely exploring on land.

The popularity of heli-tourism has even generated new adventure tours which combine the helicopter ride with another activity like heli-skiing and heli-yoga in a locale that is hard to reach or impossible to access without a helicopter.

In a few minutes to more than an hour, these rides of a lifetime not only give travelers a bird’s eye view of iconic sights like the Eiffel Tower in Paris or Christ the Redeemer statue in Rio de Janeiro, but they also take passengers to places few can go without a helicopter like inside the Grand Canyon and atop isolated Alaskan glaciers.

While major tourism destinations from Australia to Zimbabwe offer adrenaline-fueled helicopter tours, we’ve has found the best helicopter rides for having a heli-good time.

Combine a helicopter tour with a glacier hike. 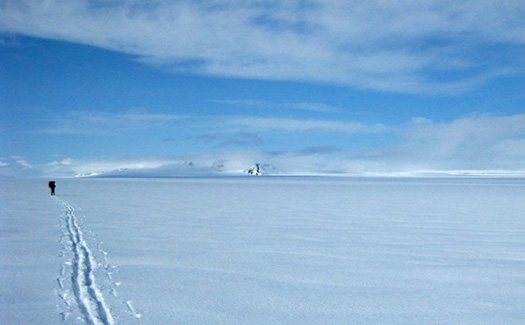 Exit Glacier Guides offers a variety of helicopter tours, but our favorite is the Helicopter Ice Hiking tour, a three-hour adventure that includes an exhilarating flight over rugged mountain peaks, icebergs, North America’s largest ice fields and a glacier. The helicopter lands on a glacier where passengers don helmets, crampons and ice axes to venture on an easy, guided two-hour glacier hike that includes a stop at a frozen river. 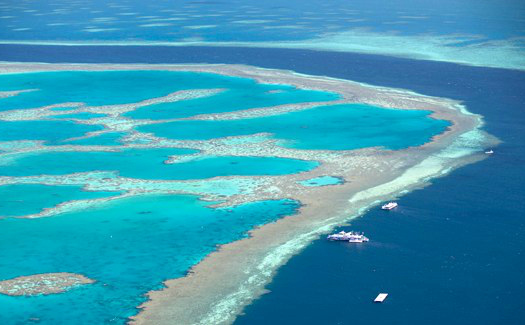 Get a bird’s eye view of the majestic Great Barrier Reef and some enviable photographs with the Heli Magic helicopter tour and Reef Magic Cruises tour. The 20-minute helicopter ride takes off from Cairns in north Queensland, Australia and provides panoramic views of the Great Barrier Reef before touching down at Marine World, an outer reef platform. Tour participants spend four-and-a-half hours snorkeling, swimming and sunbathing before cruising the turquoise waters of the Coral Sea by boat back to Cairns.

What happens in Vegas, stays in Vegas – except the breathtaking aerial photos. 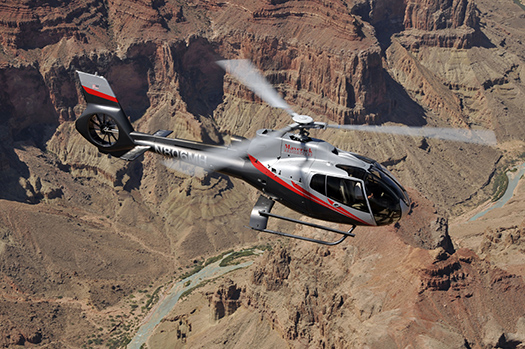 See the Grand Canyon from inside and above (Image: Maverick Helicopters) 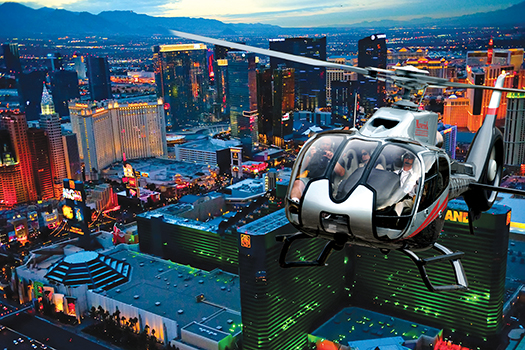 Get a bird’s eye view of the Sin City sunset (Image: Maverick Helicopters)

Travelers to Sin City who are short on time can see and experience the Grand Canyon in a matter of hours. Maverick Helicopters offers nearly a dozen helicopter excursions including its popular four-and-a-half hour Dream Catcher Sunset tour. Departing from Las Vegas, the afternoon trip flies over Nevada’s pristine desert landscape, red sandstone formations and, finally, the Grand Canyon where the helicopter lands 3,500 feet below the West Rim on Hualapai Indian territory. After a brief photo op perched 300 feet above the Colorado River, visitors partake in a Champagne toast and light snack before the return flight over Lake Mead, Fortification Hill and the Hoover Dam. Perfectly timed, the ride ends with a sunset flyover of downtown Las Vegas and the Las Vegas Strip. 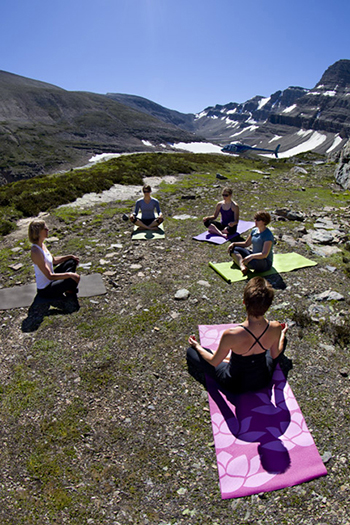 Take in the magnitude of the Rocky Mountains in mere minutes with a helicopter tour, but increase the excitement with a heli-tour from Alpine Helicopters, a tour company that combines helicopter flights with on-mountain experiences like snowshoeing and yoga. The Heli Snowshoe Adventure includes a 20-minute flight 8,000 feet above the Rocky Mountains that soars past Barrier Lake, Kananaskis and Mount Yamnuska and one hour of snowshoeing in the Canadian backcountry. The Energize & Restore Summit Yoga includes an eight-minute helicopter flight to a high mountain valley, a three-hour hike with a yoga instructor, a one-hour hatha yoga class, a picnic lunch and a return helicopter flight. With the beautiful surroundings, this trip will have you saying, “Nama-stay right here”.

Stand on top of the world, courtesy of a helicopter ride. 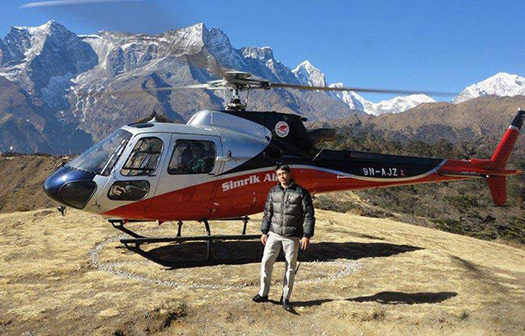 Why trek to Everest Base Camp when you can just fly? (Image: Adventure Discovery Treks & Travel)

For those who want to experience Everest Base Camp without having to endure the treacherous 14-day trek, Adventure Discovery Treks & Travel offers a four-hour Mount Everest Helicopter tour. The early morning flight begins at Kathmandu’s airport and flies along the Himalayas with views of the 29,028-foot Mount Everest and the neighboring Mount Lhotse, Mount Pumori, Mount Nuptse and Mount Cho Oyu. A highlight is a landing on Everest Base Camp for a photo op. 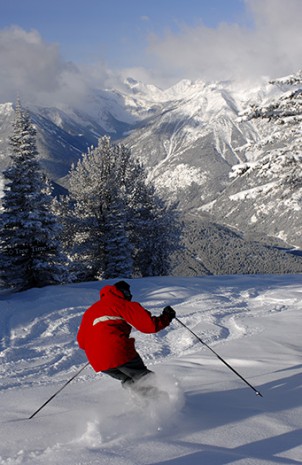 Heli-skiing is a heli-great time (Image: Destination BC)

Ski-lovers and even first-time skiers can indulge in spectacular slopes with a heli-ski trip from Canadian Mountain Holidays. Canadian Mountain Holidays offers three- to seven-day heli-ski trips to 11 areas like the Bugaboos, Monashees, Galena and the Cariboos in the Columbia Mountains in British Columbia. Travelers get unrivaled access to powder skiing, tree skiing and deep snow skiing in the Canadian wilderness. After each day of skiing, skiers relax at lodges with hot tubs, saunas, fireplaces and more. 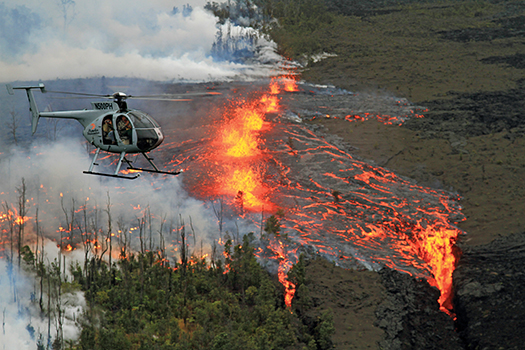 Get a bird’s eye view of volcanoes. (Image: Paradise Helicopters)

Peer into the mouth of an active volcano with Paradise Helicopters’ Kona: Volcano by Air and Land tour. The 11-hour tour includes two hours of flying over the Kona coffee district, a trio of volcanoes (Hualālai, Mauna Kea and Mauna Loa) and the Hawai’i Volcanoes National Park. The helicopter lands in Hilo where the tour continues on land with a seven-hour guided tour of Hawai’i Volcanoes National Park, including Jaggar Museum, Nāhuku, Thurston Lava Tube and Halema‘uma‘u Crater; a chance to sink your toes in Punaluʻu black sand beach; a picnic lunch; and a coffee break to sip Kona coffee at Kaʻū Coffee Mill. The return flight reveals picture-postcard views and narrated tours of Kona’s eastern and northern coasts and Pololū Valley.

Remember Rio with picture-postcard panoramas taken from high above the city. 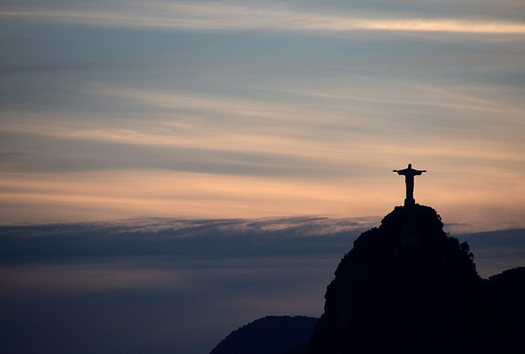 Get brag-worthy photos of Rio by taking to the skies (Image: Christian Haugen used under a Creative Commons Attribution license) 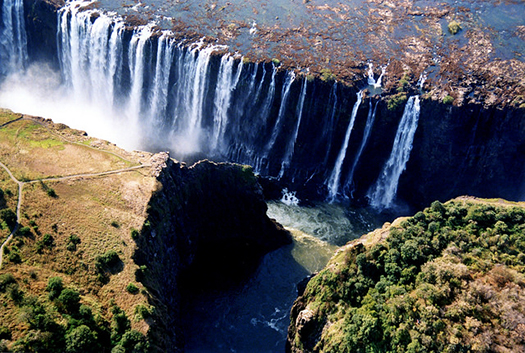 Take to the skies for panoramic views of Victoria Falls (Image: Kate used under a Creative Commons Attribution-Share Alike license)

Shearwater Victoria Falls Helicopter’s Zambezi Spectacular Flight tour combines the quintessential Zambezi National Park with a helicopter ride. The tour begins with a flight over the 5,577-foot Victoria Falls, known locally as “the smoke that thunders,” and the Zambesi River that forms the border between Zambia and Zimbabwe. The flight ends with a tour over Zambezi National Park – home to many of the traditional African species including elephant, buffalo, hippo, lion, crocodile and giraffe, which are regularly seen from the air during this stage of the flight.

Have a picture-perfect Parisian holiday by air. 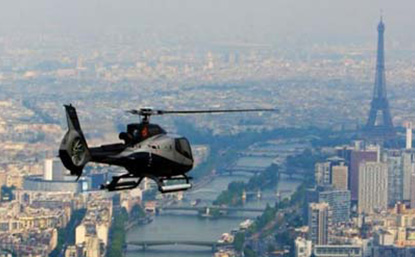 For those pressed for time, but who want to see both Paris and Versailles, French Adventures offers the Castle of Versailles by a private helicopter tour. The day-long tour includes a 25-minute one-way flight to Versailles, a private guided tour of the 18th century château and gardens of Versailles, lunch at Trianon Palace and return helicopter ride.

The minute I stepped onto Wall Street, my excitement turned to nervousness. I could hear the impulsive sounds of helicopters...
Lauren Mack

10 most breathtaking helicopter rides on the planet

There are some things on this planet of ours that are so big, their magnificence simply can’t be appreciated from the ground. Here’s our rundown of the top 10 helicopter ride destinations in the world.
Brett Ackroyd

U.S. Helicopter is offering discount fares for shuttle services between Manhattan and JFK or Newark Airport in order to mark...
Pleasance Coddington