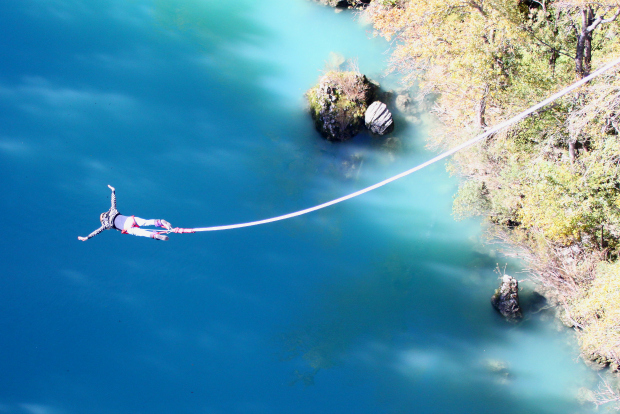 This month marks the 35th anniversary of “Raiders of the Lost Ark” and of our introduction to that now-iconic adventurer, Indiana Jones. And, if there’s one thing the much-loved character is known for, it’s getting himself into situations that require some serious nerves of steel. Whether you’re known among your friends as the one who’ll try anything, or you’re more of an armchair adrenaline junkie, there are many ways to get your heart racing that would make our intrepid movie hero proud. If you’re going to do something big and bold, ask yourself, “What would Indy do?” Cast any fears aside and get ready to go on an epic adventure. From skydiving to bungee jumping, we’ve found the once-in-a-lifetime places to go for broke and tap into your inner Indiana Jones no matter what adventure you choose. 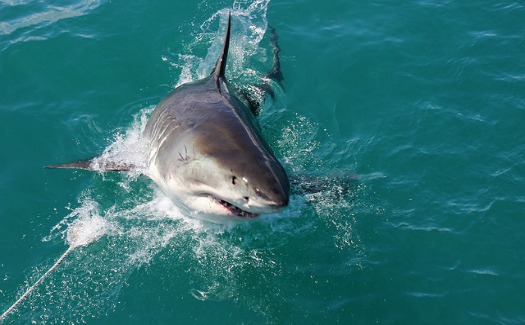 If you’ve ever wanted to see a great white shark up close, your best bet is signing up for a cage diving experience that will bring you face to face with them right where they live. One of the best places in the world to do a shark cave dive is in South Africa, in particular, Gansbaai and the area around nearby Dyer Island. A large colony of cape fur seals (often more than 30,000 strong) inhabits Dyer Island, and they just happen to be the preferred food of great white sharks, making the area perfect for shark diving (not so perfect for the seals). And, since sharks hunt close to the surface, they’re particularly easy to spot. You don’t need any diving experience to cage dive, and each dive lasts around 30 minutes. Take one of White Shark Diving Company’s shark cage dives at Dyer Island and, in the unlikely event you don’t spot any sharks, your trip is free. 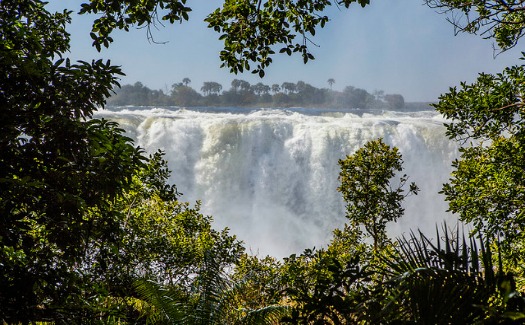 One of the biggest adrenaline rushes out there has to be bungee jumping. Leaping from extreme heights attached only to an elastic cord isn’t for everyone, but there are a lot of people out there interested in taking the plunge. And, if you’re going to do it, it might as well be epic. There’s no jump spot more epic than from the Victoria Falls Bridge, on the Zimbabwe and Zambia border. Not only will you have the mighty Victoria Falls as your background, you’ll be jumping over the roaring Zambezi River. Victoria Falls are known as the largest curtain of falling water in the world. The jump itself is 364 feet and will give you four seconds of free fall. Just remember to bring your passport because you’ll need it to get onto the bridge. Shearwater offers solo bungee jumps over Victoria Falls for anyone who dares take the leap. 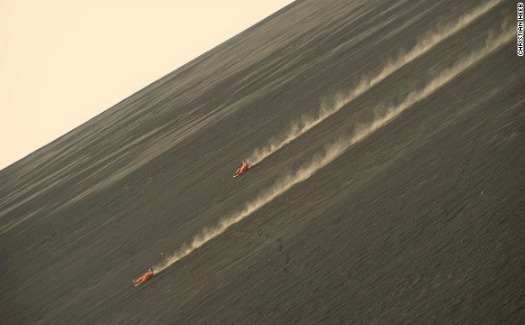 You’ve heard of snowboarding and have maybe even done it a few times. But what about volcano boarding? As the name would suggest, this adventurous activity has you sliding down the side of a volcano, in this case, an active one (it hasn’t erupted since 1999 and is heavily monitored). Cerro Negro, near Leon in Nicaragua, is a justifiably popular spot for volcano boarding. You’ll start by hiking up the rocky side of the 2382-foot-high volcano, which takes less than an hour – and then the real fun begins. Once you’re ready, you’ll slide down the sandy side of the volcano on a board similar to a snowboard. The ride down takes less than three minutes and you can hit speeds of up to 50 miles per hour. Try it out for yourself with Bigfoot, a hostel that also runs volcano boarding trips. 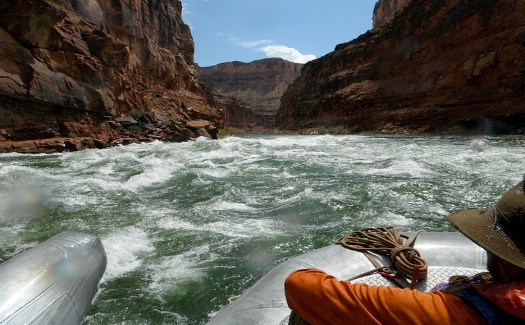 There are many ways to be adventurous on the water, and one of the best has to be white water rafting. The Colorado River runs through the Grand Canyon, one of the most spectacular sights in North America, if not the entire world, making it an ideal spot to cross white water rafting off your bucket list. The trip will take you through various classes of rapids as well as to hidden waterfalls and areas of Grand Canyon National Park that can only be accessed by the river. The areas where you aren’t battling rapids allow you to soak in the astounding views of the canyon. Western River Expeditions runs three, four, six and seven-day rafting trips so there’s an option waiting for you no matter how much time you have. 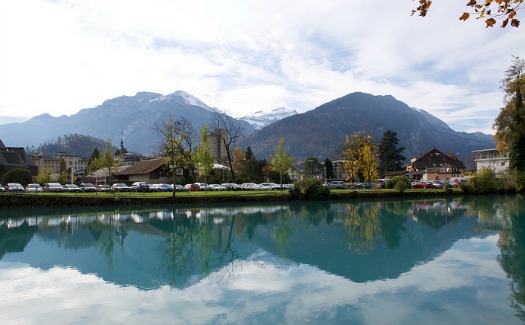 There are many places in the world where you can jump out of an airplane, but some are more awe-inspiring than others. And, if you are going to do it, why not jump somewhere with an incredible vista to take in from on high? If it’s unforgettable views you’re looking for, you can end your search with the Alps. Interlaken, Switzerland, is situated between two sparkling blue lakes and is surrounded by mountains so you can’t ask for better skydiving scenery. Your jump will likely net you 40 seconds (sometimes more) of free fall at a whopping 125 miles per hour. With Skydive Interlaken you’ll be making your leap out of a helicopter, an exciting prospect in its own right. After a briefing on safety and information on what to expect, you’ll get harnessed up, take a helicopter flight and then, after a final gear check, take a tandem jump for the adventure of a lifetime. 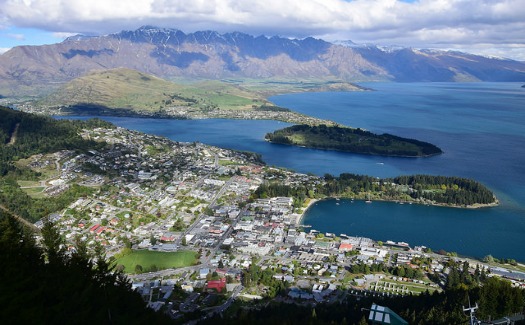 Closely related to bungee jumping, the sky swing or ledge swing is worlds apart from the playground swings you’re used to. Queenstown, New Zealand, is home to the Nevis Swing, which happens to be the largest in the world. After being lifted above the launch site to a stomach-lurching 525 feet in the air above the river below, you’re let go. You’ll swing in a 985-foot arc from a swing that’s part of a 394-foot length of rope at speeds of 75 miles per hour. You can swing your way to adventure through AJ Hacket Bungy New Zealand, which also offers bungee jumping. 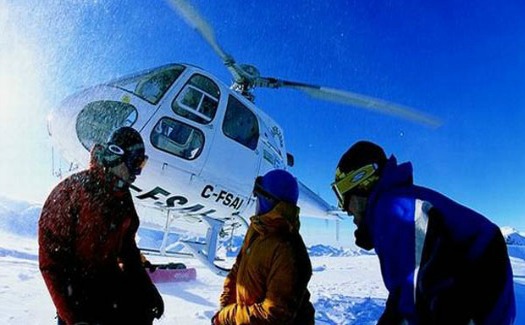 Bored with regular skiing? Maybe it’s time to try heli-skiing or accessing remote slopes via helicopter to ski or snowboard down hills covered in untouched snow. The sport was started in Canada so it makes sense that Canada, in particular, the mountainous west, is one of the best spots to try it. Canadian Mountain Holidays (CMH) was started in 1965 by Hans Gmoser, inventor of heli-skiing. The company’s terrain covers 3 million acres across 11 distinct sites – that’s an area large enough to be considered its own sovereign state. Heli-skiing is not a beginner’s sport. The CMH website outlines a list of criteria to check out before you decide to give it a try. It also offers an intro program to get first timers more comfortable. 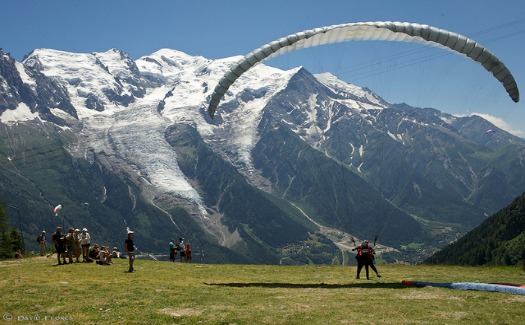 Charming Chamonix lies at the foot of Mont Blanc, making it very attractive to winter sports enthusiasts. However, summer adventurers who like to take to the skies are drawn there as well. France is home to hundreds of paragliding sites, but, due to its proximity to towering Mont Blanc and the beautiful Chamonix Valley, Chamonix is a paraglider’s paradise. If you’re experienced, you can fly solo, but, if you’ve never been paragliding before, not to worry. You can opt for a tandem flight with an instructor, something offered through Fly Chamonix. The company operates year round with flights lasting around 20 minutes. 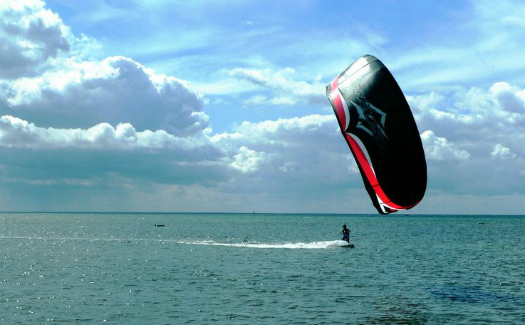 The Cayman Islands might be well known for their multitude of beautiful beaches, but they also happen to be one of the best places in the world to go kitesurfing. That’s thanks to a warm, steady wind and lots of protected bays that allow for space to cruise. The protected bays also make the Cayman Islands a good spot for beginners to learn. If you’re thinking of giving kitesurfing a shot, The Sweet Spot Cayman on Grand Cayman offers group and private lessons for beginners as well as for intermediate and advanced kitesurfers.