Flights to Montevideo in 2021

Can I fly to Montevideo right now?

There are currently restrictions on flights to Montevideo along with the rest of Uruguay. Before you book or search for flights, consider the following restrictions: Entry restrictions

Uruguayan borders are currently closed, with a few exceptions for family reunification between parents and minor single children or adult children with disabilities, or between spouses or common-law spouses. Drivers for international transportation companies, airplane pilots, and seamen may also enter the country.

All travelers and airline crew entering Uruguay will need to show a certificate of negative RT-PCR coronavirus test, carried out within 72 hours of travel. Travelers must have a valid health and travel insurance for the duration of their stay and complete the health declaration before arrival.

Travelers staying longer than 7 days must enter a 7-day isolation. They will be re-tested on day 7 and may leave quarantine with a negative result. Travelers must also download the 'Coronavirus Oops' for contact tracing, and all non-resident foreigners entering Uruguay must have proof of health insurance that covers suspected or actual coronavirus.

Travelers are not allowed to transit with the exception of nationals and residents of Argentina, Brazil, Paraguay transiting through Montevideo (MVD) or Punta del Este (PDP).

For more detail, please check the Ministry of Tourism website (in Spanish).

If you are looking to book a trip to Montevideo and are outside of the restricted areas, please take the proper precautions and stay informed about traveling during COVID-19.
Hide COVID Travel Restrictions for Montevideo

The cheapest ticket to Montevideo found for each month in 2021 based on historical flight searches by Cheapflights users.

January
$876
February
$843
March
$875
April
$800
May
$876
June
$848
July
$801
August
$806
September
$863
October
$943
November
$834
December
$856
Currently, April is the cheapest month in which you can book a flight to Montevideo. Flying to Montevideo in October will prove the most costly. There are multiple factors that influence the price of a flight so comparing airlines, departure airports and times can help keep costs down.

When is the best time to fly to Montevideo?

Average Montevideo Carrasco flight ticket prices and weather conditions for 2021 and 2022 by month.

Flying to Montevideo in April is usually considered the best time to fly. However, you will find other deals are always available year round. If you are looking for warm weather when you arrive off of your flight to Montevideo then January is statistically the hottest. March is historically the period with most rainfall.

Which day is cheapest to fly to Montevideo?

The cheapest day to fly to Montevideo is usually Friday. At the moment, Monday is the most expensive.

What time of day is cheapest to fly to Montevideo?

Montevideo is the gem of Uruguay’s culture and nightlife. The largest city in the country, it boasts the perfect seaside location for summer vacations, and gorgeous coastal conditions in the winter. Eclectic by nature and diverse to a fault, Uruguay’s blend of people, music, language, and cuisine drive it to be one of South America’s most rocking locales.

Known mostly for its heavily used industrial port, Montevideo was once used as a fortress for the Spanish Empire until the 18th century. Montevideo is home to half the country’s population, and for good reason, it’s hard not to be amazed at the gorgeous banks of Rio de la Plata, or the influx of Spanish, Portuguese, French, and British energy. All of this culture is evident through the city, in its art, its establishments, and its breathtaking architecture.

The discerning traveler will be able to uncover the subtle magic of the city, and appreciate the architecture ranging from art deco to colonial. Take a stroll down La Rambla from Old City to Carrasco to truly complete your travel to Montevideo.

Summer in Montevideo lasts between the months of December and March. Temperatures rise up to the 80’s and some rain and thunderstorms roll in during the hottest evenings. Winter time is from June to August, with temperatures in the 60’s keeping things cool and dry for the most part during the day and a bit chillier in the evenings.

Best Time to Fly to Montevideo

The best time to plan flights to Montevideo is undoubtedly the month of May. The heat is still in the air, but it isn’t too hot to get outside in the afternoon. Comfortable conditions make sightseeing easy and bearable, and rainfall keeps to a minimum.

The perfect time to book flights to Montevideo is in the spring – September to November, when the temperatures are mild and dry. Sunny days prevail, and rainfall is quite rare this time of year, so pack a light jacket and layers, and you’ll be set for the day.

There’s really no bad time to come here, since the seasonal weather brings balancing conditions, but less people visit in March and April, when rainfall is at its pinnacle. If you can withstand the rain, you’ll probably find a cheap flight to Montevideo during the off-season – just make sure to pack an umbrella.

You can easily rent a car, but Montevideo is easy to get around by bus or on foot. You can walk to most of the tourist attractions, which are clearly marked, and the buses also cover the tourist area. Taxis can be difficult to hail during rush hour.

Geography and Infrastructure: One of the things that makes this city so entrancing is its physical attributes. Settled happily on the water, (and basically surrounded on three sides) the area was once used as a fortress by the Spanish. When exploring Montevideo, you’ll see historical traces on the western side of town, known as Old City. This is where Plaza Independencia, museums, theaters, and hotels converge.

Casa Rivera: Although it might be a good idea to read up on Uruguay’s recent history on your flight to Montevideo, it’s also important to get a taste of its roots once you’re there. Visit Casa Rivera, on the same plot as the National Historical Museum. Scattered around the property are stunning 19th century Ciudad Vieja houses. Inside Casa (the former home of Uruguay’s first president), there are paintings, documents, furniture, and artifacts that chronicle the country’s history from its roots to its independence.

Plaza Independencia: A bustling atmosphere filled with diverse groups of people, Plaza Independecia resides in the heart of Montevideo’s Ciudad Vieja (just call it the Old City if you’re talking to a local). If you’re looking for a real-life, moving picture when you travel to Montevideo, take a stroll through the plaza here to capture it all. The wide square is adorned with uplifting rows of palm trees, and an emblematic statue of Jose Artigas stands tall, carrying the weight of its heroic national reputation. To pay your respects to the figure, head down to the underground tomb beneath the statue.

Museo de Arte Contemporáneo (Museum of Contemporary Art): For art buffs planning flights to Montevideo, the Museo de Arte Contemporaneo (Museum of Contemporary Art) is a must-see. Built in 1997 and dedicated to all realms, colors, and media of contemporary Uruguayan art, this place houses some of the biggest names in the country. Be sure to give yourself enough time to really wander – each room deserves its own attention. The museum exists purely to promote cultural exchange across the region, and does its job quite well.

What airport do you fly into for flights to Montevideo?

If you book a flight to Montevideo, you will be flying into Carrasco, which is the city’s only airport. Montevideo Carrasco (MVD) is located 10.0 mi from the center of Montevideo.

See alternative destinations where airfare is generally forecast to be close to Montevideo flight prices. 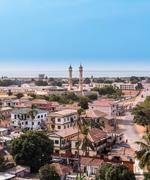 Cheap tickets to Montevideo found by our users in USA as recently as June 10, 2021.

Other local departures to Montevideo from United States

Not set on Montevideo? See the cheapest flights to United States. Airfare prices updated on June 10, 2021.