Fliers are spending more and more time in terminals, thanks to long layovers and recommendations that travelers arrive hours before their scheduled departure time. Thankfully, as the wait time has increased, so has the caliber of airports’ amenities – in style and sophistication. The offerings in some terminals – from drinking and dining, to ways and places to relax, to the old favorite, duty-free shopping – mean some travelers may soon be visiting these airports as destinations themselves.

Amsterdam Airport Schiphol – Amsterdam, Netherlands
It’s only fitting that one of the world’s most memorable cities has one of its most original airports. Inside the airport, there’s a free branch of the national Rijksmuseum where you can take in art from van Gogh and other Dutch masters. Those feeling lucky can try their hands at the in-airport casino for the chance to win big before taking off. If you want to squeeze more time into seeing Amsterdam, high-speed trains run downtown frequently. And Schiphol has one of the coolest offerings of any airport anywhere: a wedding chapel for those wishing to take off in newly wedded bliss. Search and compare cheap flights to Amsterdam. 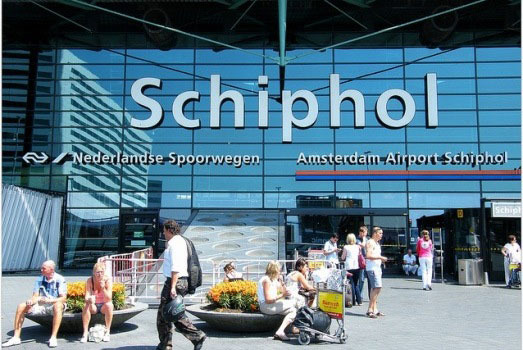 Singapore Changi Airport – Singapore
The hyper-organized city-state naturally boasts one of the best laid out and passenger-friendly airports in the world. Besides some of the best pre-flight shopping, the airport offers peaceful gardens complete with koi ponds to soak up some relaxation before flying, a live butterfly garden with a 20-foot waterfall, and free movie theaters in two terminals. Those with enough time before takeoff can take the free two-hour tour of Singapore and be back in time for boarding. Search and compare cheap flights to Singapore. 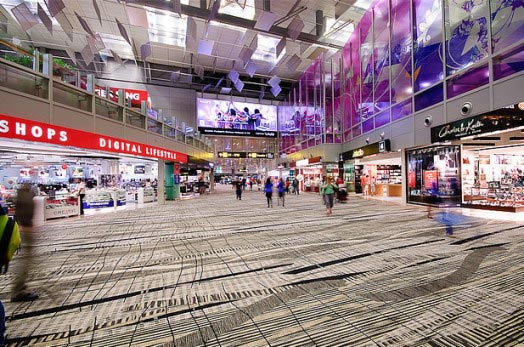 San Francisco International Airport ­­– San Francisco, California, United States
Making travel smarter, the brainy city by the Bay has its own major cultural institution. The Airport Museum hosts a plethora of art, science and cultural exhibits, including galleries that show more than 40 exhibits per year. One of the coolest airport features anywhere is the Steinhart Aquarium, which features aquatic wildlife from around the world. To help take the stress out of travel with a little “om,” there’s an in-terminal yoga studio. If you’re traveling with little ones, SFO caters to children, with an array of children’s programs, including educational programming within the airport museum, exhibits of Bay Area students’ artwork, and an educational Kids’ Spot, a play area in conjunction with the city’s Exploratorium science museum. Search and compare cheap flights to San Francisco. 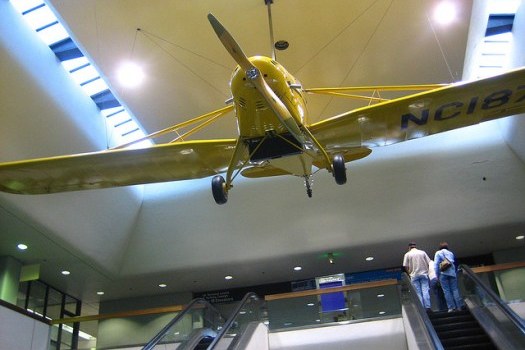 Munich Airport Centre – Munich, Germany
It’s fitting that passengers transiting or leaving Germany can take advantage themselves of traditional German hospitality and cultural accoutrements. From the wurst-filled Airbräu biergarten to a seasonal traditional Christmas market complete with an outdoor ice skating rink to the beautiful, ultra-modern Terminal 2, fliers are treated to the best of German customs, old and new. Search and compare cheap flights to Munich. 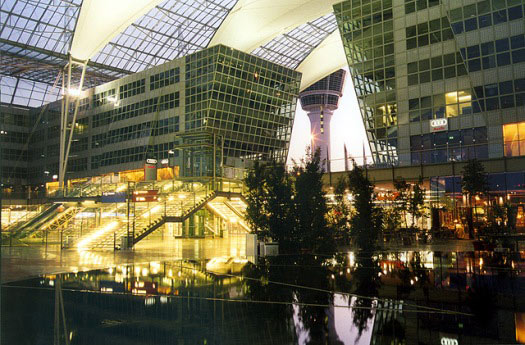 Dubai International Airport – Dubai, United Arab Emirates
With its ambitious and grandiose plans to make itself a world center, Dubai boasts an airport that is no exception, rapidly closing in on the title of world’s busiest. Besides having some of the best luxury and duty-free shopping anywhere – nearly 50,000 square feet of it – the immaculately kept facilities include a gym and pool for a pre-flight workout, as well as children’s play areas, and a tranquil Zen garden to relieve travel-related stress. Search and compare cheap flights to Dubai. 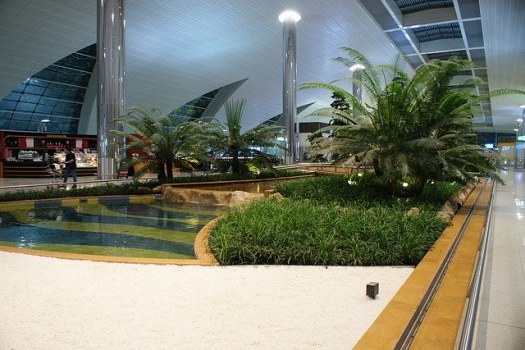 Incheon Airport  – Seoul, South Korea
Incheon is both one of the world’s 10 busiest airports and one of the most highly rated by passengers. Fittingly, its amenities and user-friendliness match this. Besides the ubiquitous shopping options, there is a spa for unwinding before and after flights, internet lounges, children’s play areas and even an enormous golf course, practice range included. Search and compare cheap flights to Incheon. 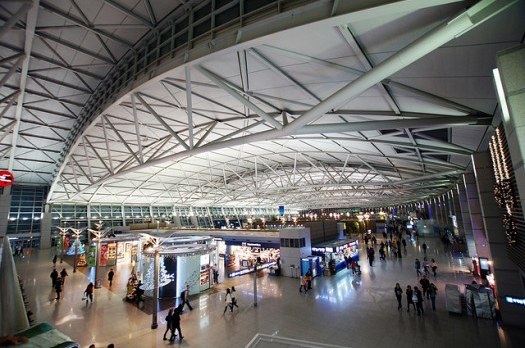 London Heathrow Airport – London, England
Paradoxically, for one of the world’s most derided airports, Heathrow is very well-regarded in terms of its layover options. Shopping opportunities abound, anchored by an 11,000-square-foot branch of the famous Harrods department store in Terminal 3. There are other luxury British boutiques as well, such as Burberry and Thomas Pink. To catch some Zs, you can check into one of Yotel’s space-stationy, pod-like “rooms,” in Terminal 4, which are available by the hour. Search and compare cheap flights to London. 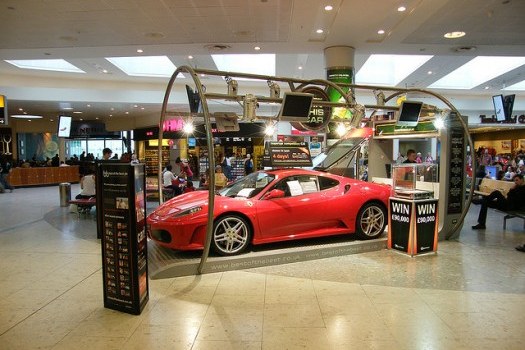 Vancouver International Airport – Vancouver, British Columbia, Canada
As both the gateway to Canada’s West Coast and the Asia-Pacific region, Vancouver’s ultramodern airport straddles both sides of the world with gleaming style and comfort. Summer features Take Off Fridays, bringing all the aspects of a fair to the airport, including free food, an “Underground Circus” with acrobats, caricaturists, local musicians, and DJs spinning right in the terminals. Befitting its maritime location, there is a branch of Vancouver’s aquarium, with a 31,000-gallon tank inhabited by over 5,000 members of British Columbian sea life, including fish, eels, urchins, and anemones. There’s even a smaller tank, just for showing native jellyfish. If you’re hungry, there are even fine dining options, including a formal Japanese restaurant with a revolving sushi bar showing off the airport’s mountains-meet-ocean location. Native art from the coastal Pacific Northwest adorns the airport throughout, in one of the largest such collections in the world. Search and compare cheap flights to Vancouver. 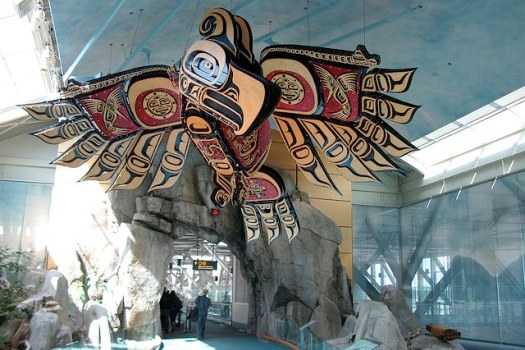 John F. Kennedy International Airport – New York, New York, United States
The best-known feature of the airport is the original TWA terminal, completed in 1962 during the early Jet Age. Its distinctive shape evokes a bird’s wings, and is recognized as an architectural masterpiece and preserved as an official landmark. It was reopened in 2008 as Terminal 5 – or simply T5 – with the building incorporated into JetBlue’s home base, without losing its luster. JetBlue even puts on a series of shows there, known as “Live From T5,” that features acts like Hot Chip, Sarah McLachlan, Kany Garcia and others. Search and compare cheap flights to New York. 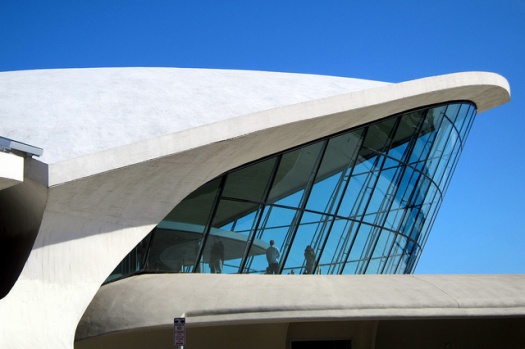 Hong Kong International Airport – Hong Kong
This futuristic airport sits on an artificial island off of Hong Kong Harbour and features the world’s second-busiest passenger terminal, with amenities befitting its status. There’s the requisite collection of luxury and duty-free shopping, including Chanel, Prada, and other couture lines, as well as high-end electronics and liquor. Most striking is the SkyCity Nine Eagles Golf Course, a full 9-hole regulation golf course, where you can yell “Fore!” before taking off. It’s even fully lit for nighttime golfing. For the athletically inclined, there’s iSports, a sports simulator, where you can play basketball, soccer and auto racing. There’s even an IMAX movie theater, showing immersive hit 2D and 3D films. Search and compare cheap flights to Hong Kong. 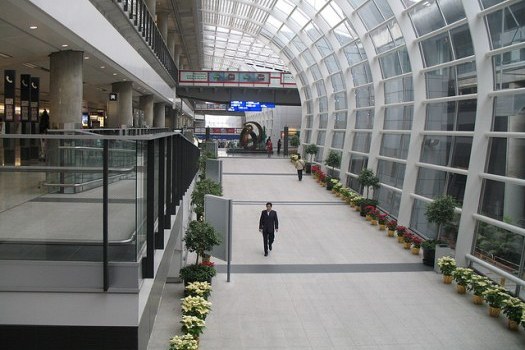 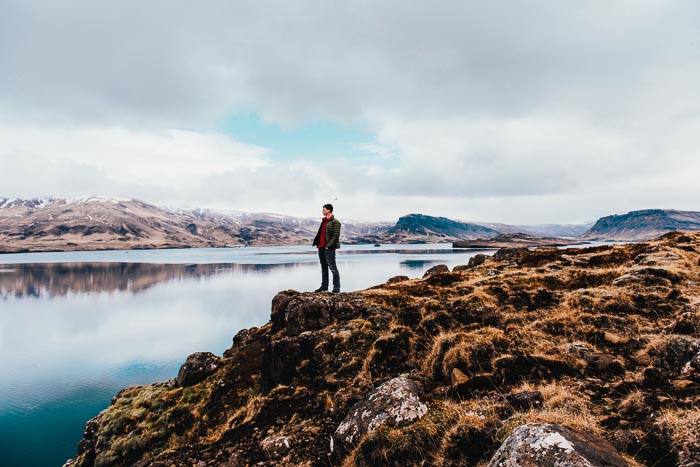 Flying non-direct routes can be a good way to cut down on flight costs, but they do result in those...
August 16, 2017‐Kirsten McCroskrie 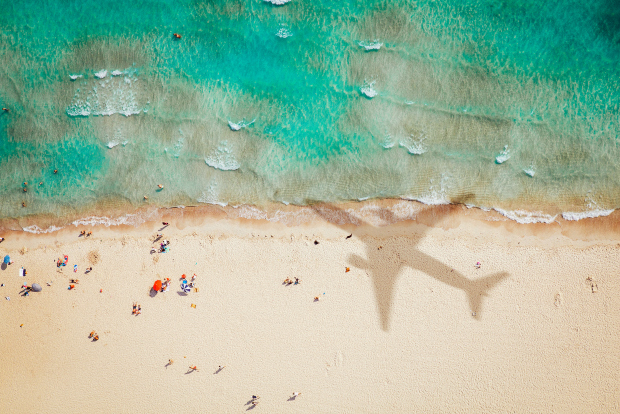 It’s finally summer vacation season, and we all want to wring every moment of sun and fun out of it....
June 20, 2017‐Jessica Padykula