From Australia to Zimbabwe, the world is getting ready to usher in 2017. And with parties taking place in every type of venue from ritzy hotels to public squares to glittery harbors, the settings for ringing in the New Year are as varied as the destinations themselves.

One of the best places to catch fireworks at the stroke of midnight and share New Year’s Eve kisses is the beach, especially one where a legendary party unites friends old and new to welcome 2017. Whether celebrating Réveillon in Rio de Janeiro, Brazil, Old Year’s Night in the British Virgin Islands, or ringing in the New Year in Miami, there are plenty of beach parties to dance and sing the night (and year!) away. Three, two, one… and cue the fireworks! 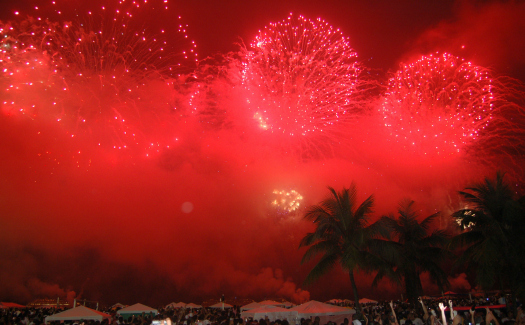 Ushering in the New Year on Copacabana Beach in Rio de Janeiro is an experience akin to Carnival. Known as Réveillon, New Year’s Eve celebrations in Brazil begin with placing offerings of flowers and candles in the ocean to lemanjá, the Afro-Brazilian sea goddess of fertility. After dark, revelers dance to live music at stages that populate a nearly three-mile stretch of beach. The festivities culminate with a dramatic 20-minute fireworks display. 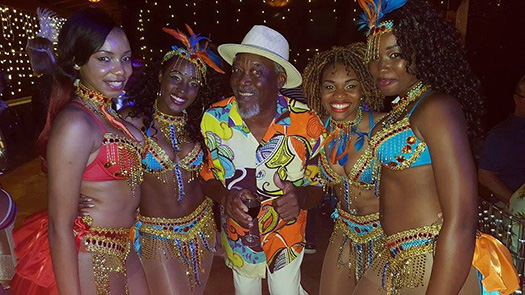 Ring in the new year’s on an island. (Image: Foxy’s Bar)

Since the beginning of the millennium, Foxy’s Bar has hosted Old Year’s Night, the Caribbean’s largest New Year’s celebration. From Dec. 30 to Jan. 1, the small island of 300 inhabitants swells as hundreds of yachts fill the bays and harbors to party alfresco on the beach. The theme for this year’s bash is Foxy’s circus. A costumed ring master leads the festivities, which includes dancers, fire breathers, circus performers, stilt walkers and live music on Foxy’s Main Stage. The lineup features many of the Virgin Islands’ most famous party bands and DJs, including Spectrum Band VI, Final Faze, DJ Avalanche, Plur Sensation and DJ Dre. Folks without a yacht can access the party by taking ferries from St. Thomas, St. John and Tortola. 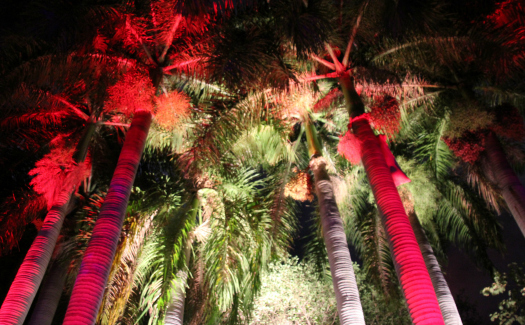 With temperatures on New Year’s averaging around 75 degrees Fahrenheit, Miami, Florida, is a magical place to ring in the New Year. Whether revelers choose to countdown at Bayfront Park, a 32-acre park in downtown Miami that overlooks Biscayne Bay, or on South Beach in ultra-trendy Miami Beach, each celebration offers free music and fireworks. Pitbull’s New Year’s Revolution 2016 is a free, four-and-a-half hour concert featuring the entertainer. For a separate entry fee, concertgoers can fuel up for midnight fireworks at the Worldwide Food and Wine Festival. At midnight, a giant neon orange drops from the nearby InterContinental Hotel. Club goers can join hotel parties hosted at South Beach hotels or hit the beach for live music, people watching and midnight fireworks at Lummus Park and Ocean Drive. 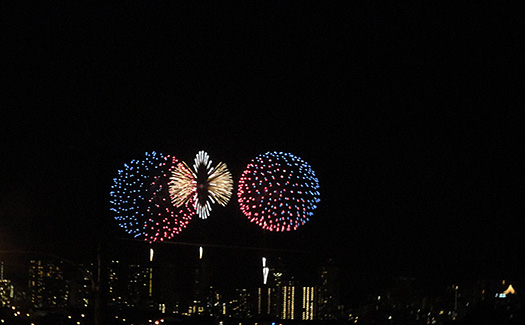 The skies above Waikiki Beach on Oahu are illuminated with streaks of color during the annual New Year’s Eve fireworks celebration. The countdown to 2017 begins with a fireworks salute each minute starting at 11:55 p.m. from a barge just off Waikiki Beach. At the stroke of midnight, a barrage of 1,800 fireworks in fanciful shapes like palm trees, rings, strobes, sparkling fans, colorful falling leaves, brocades and willows launch into the night sky during the 10-minute presentation. The spectacle culminates with the playing of “Auld Lang Syne.” 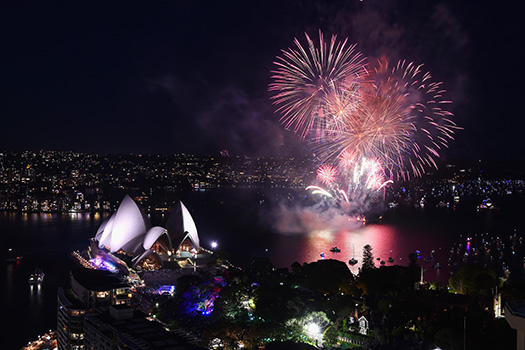 Ring in 2017 Down Under. (Image: Cameron Spencer City of Sydney/Getty Images)

End 2016 and begin 2017 with sand between your toes on Bondi Beach in Sydney, Australia. The city’s most popular beach hosts a party and offers a more distant vantage point from which to see the iconic Sydney Harbour fireworks, which takes off from the other side of the city. Two fireworks displays grace the night’s sky: a family fireworks display at 9 p.m. and the main event at midnight. This year’s show, with seven tons of fireworks, which includes 11,000 shells, 25,000 shooting comets and 100,000 individual pyrotechnic effects, will be the biggest display ever. Post-fireworks, many revelers opt to spend the night on the beach, catching the first sunrise hours after the last fireworks explode over the city. 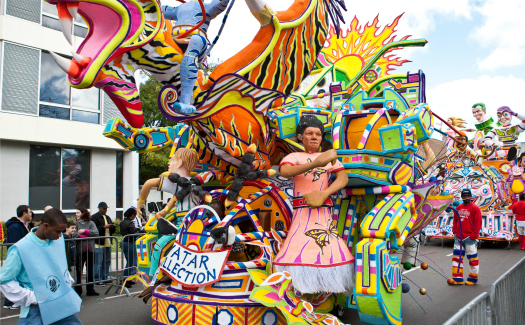 Do as the locals do and follow junkanoos, lively parades with costumed characters, floats and street performers, that ultimately lead to beach parties. Join the residents of Crooked Island and Long Cay for a potluck family day with a grill out, games and fun on Dec. 31. Many hotels, including the Stella Maris Resort Club and Atlantis Bahamas host lavish New Year’s Eve parties with buffets, live music and fireworks. The revelry continues on New Year’s Day and Jan. 2 with more junkanoos. The Abaco Islands host one of the most popular parades on New Year’s day, running through the historic streets of New Plymouth on Green Turtle Cay. Nassau ushers in the New Year with an elaborate junkanoo along Bay Street on Jan. 2. 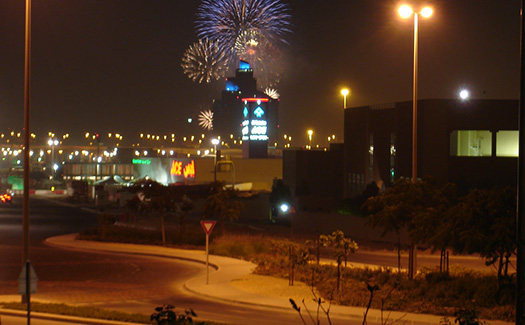 See one of the largest fireworks displays in the world in Dubai. (Image: Step, New Year’s Eve 2007 Dubai via Flickr CC BY 2.0)

In a city of superlatives that in 2014 broke a record for the largest and longest fireworks display in the world, Dubai hosts one of the most spectacular fireworks displays to be found on New Year’s Eve. The most exclusive vantage point to view the fireworks is from the sail-shaped Burj Al Arab, the world’s only seven-star hotel, perched on Jumeirah Beach. The hotel offers a variety of ways to ring in the New Year, including a Champagne reception in the world’s tallest atrium, dinner in one of five restaurants, midnight fireworks and an after-party. 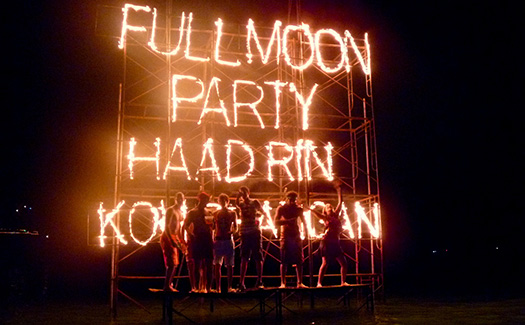 Party all day and night. (Image: Thomas sauzedde, full-moon-27 via Flickr CC BY 2.0)

When the full moon comes out, revelers gather along the crescent-shaped Haad Rin Beach to party all night. The most epic of these island beach parties is on Dec. 31 when 30,000 partiers come to ring in the New Year at the Full Moon Party. With drinks flowing, music pulsing from a collection of beach bars and clubs and dancing that lasts long into the New Year, the Full Moon Party is the quintessential beach bash. 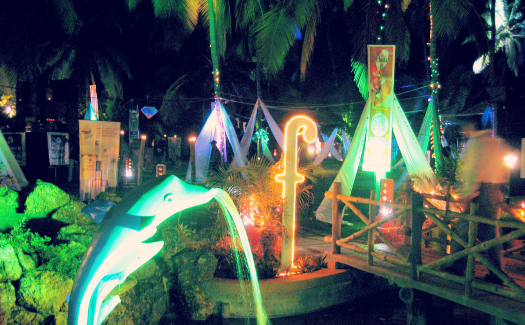 While the party scene in Goa has been muted some in recent years, the beach is still the epicenter of celebration for New Year’s Eve. Whether you want to hit the beach bar and dance scene or join in more traditional fun with barbecue feasts, floating lanterns and impromptu fireworks shows strewn along the coast, you will find a crowd of friendly locals and world travelers to join you. All eyes turn to the harbor at midnight for the official fireworks show before the party rolls on. 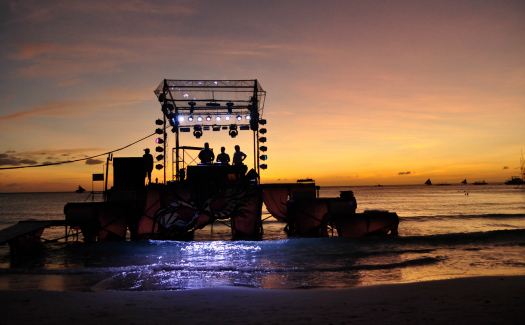 Boracay has lots to offer beachgoers, from island hopping to snorkeling, diving and zip lining. And on New Year’s Eve it becomes the go-to spot to celebrate under the stars. Head to White Beach for a lively crowd, fireworks displays and a number of bars and nightclubs offering music and a party atmosphere. Fireworks start around 11:30 p.m. and continue into the night until about 12:45 a.m. “Steve’s Cliff” at Boracay Terraces Resort in Station 1 offers an unmatched vantage point for the multiple displays. Or kick off your New Year’s Eve celebration with a beachside dinner. Many of the larger resorts offer tables with a perfect view of the evening’s fireworks.

Where are you ringing in the New Year? Let us know in the comments.

There just ain’t no party like a Las Vegas party, and this year, the parties are rocking around the clock...
Marissa Willman

Summer is prime time to visit a national park, and it’s also one of the best times of year to...
Marissa Willman

Often regarded as the most picturesque and noteworthy national park in all of China, Zhangjiajie amazes visitors year after year...
Marissa Willman

CheapflightsBeach & natureNew Year’s Eve with a splash: 10 top beach parties for ringing in 2017