At Cheapflights, we did a deep dive into the data to see if either of those cases are true. Our findings? That Aug. 23 itself is not that special a day for cheap flights, whether you’re talking about trying to buy or to fly for less. However, there are some good reasons to talk about cheap flights this time of year. Here are some keys things the data does show:

The last week in August is generally the cheapest week for travel in the summer. Flight prices throughout June, July and early August rival the holiday season for cost, but the end of summer slowdown starts the week leading up to Labor Day. We took a look at some of the most popular spots to see what bargains we can still find for end of summer travel.

Here are some deals we’re currently seeing for travel the last week of August:

For the lowest overall fares, though, plan to travel between late September and early November. The dates with the lowest fares of the year*, on average, tend to fall in that window. This is important to know now as it’s prime booking time for getting deals in that value window. That’s why there’s a burst of flash sales going on right now.

Be flexible: Moving your travel dates around even by just a few days can help you save big. Try flexible search and calendar options when you’re looking for flights or vacation packages online to see more deals.

Focus on the type of trip you’d like to take rather than the destination: For example, decide you’d like to go on a beach and golfing trip instead of focusing specifically on going to Hilton Head, South Carolina. Or be open to a cruise anywhere in the Caribbean rather than just to Aruba. You’ll open yourself up to more options and likely more saving that way.

Travel mid-week: Airlines and hotels know that Friday, Saturday, Sunday and Monday are the easiest times to travel, so prices are higher. If you can travel on Tuesday or Wednesday, you’re likely to get lower prices on both your flight and your hotel. The first and last flights of the day are also usually less in demand than flights in daylight hours so they are generally less crowded and more affordable.

Sign up for newsletters and follow your favorite travel brands on social media: Many airlines and hotels will use these platforms to promote last minute deals and flash sales.

Be ready to act when you see a deal: Know what a good price is for the flight you want to take and, when you see it, snag it. The best fares don’t last long.

Don’t fear buyer’s remorse: Do be aware that, by U.S. law, airlines must offer you the chance to hold a price or cancel a purchase on any non-refundable ticket bought at least seven days in advance for a 24-hour period. Most airlines fulfill that by letting you cancel a qualifying purchase in the first 24 hours. This gives you a chance to check back the next day to make sure you didn’t just miss a price drop as well as the opportunity to keep shopping just in case you can score an even better deal.

* Based on the average of all searches done to all domestic and international destinations between 30 and 120 days in advance from departure points across the U.S. All airfares are good as of Aug 17, 2017, and include taxes and base fares.

QUIZ: How savvy are you at finding a cheap flight?

Are you a flight-finding pro or could your searching skills use an upgrade? Take our quiz to find out whether...
Amanda Festa 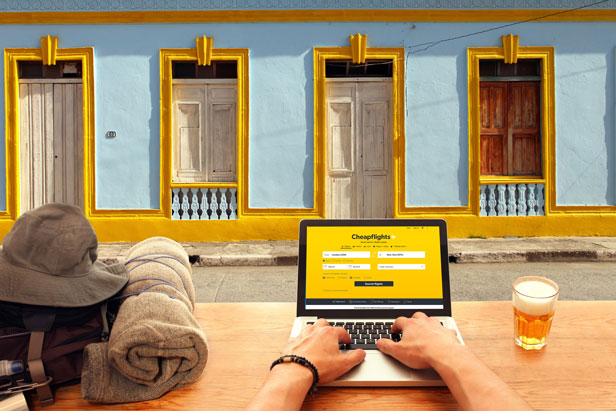 How to find a cheap flight

Finding cheap plane tickets isn’t rocket science. It just takes some flexibility and a little research. When you need to...
Amanda Festa

How to find a cheap flight in Facebook Messenger

Today we launched Cheapflights Chat — a travel search in Facebook Messenger. It uses the latest technology from Facebook mixed with our flight search...
Lydia Curtis