It’s the worldwide, runaway, Oscar-winning smash that shows no signs of losing popularity. Loosely based on “The Snow Queen” by Hans Christian Andersen, “Frozen” is the highest grossing animated film of all time.

There’s not much these days that’s NOT carrying the “Frozen” sparkle. In addition to dolls and teddy bears, there’s bread and bridal gowns, chocolate, make up and coding lessons.

The Disney “Frozen Sing-Along Edition” on DVD & Digital HD was released Nov. 18, just in time for Christmas shopping, and Elsa is popping up at parties and parades with Anna, Kristoff and Olaf. Even “The Simpsons” had the “Obligatory ‘Frozen’ Reference” at the start of their Christmas episode.

Meanwhile, the long-awaited short film “Frozen Fever” will be released with “Cinderella” in March 2015, but for those who don’t want to “Let It Go,” here’s a look at what’s happening around the world:

The world’s most famous sisters are taking over the Norwegian corner at Epcot. In 2016, a new “Frozen” attraction will be added to the Norway Pavilion. The ride will take guests on a journey to Arendelle, through their favorite moments and songs. And Anna and Elsa will have a new meet-and-greet location at Epcot.

Over at Magic Kingdom Park, the “Frozen” characters have moved in for the holiday season. Queen Elsa has taken over the Fairy Godmother’s job of lighting up Cinderella’s Castle. Each night, Elsa uses her cryokinetic powers to ice the palace.

Mickey’s “Once Upon a Christmastime Parade” also features Anna, Elsa, Kristoff and Olaf for the first time. 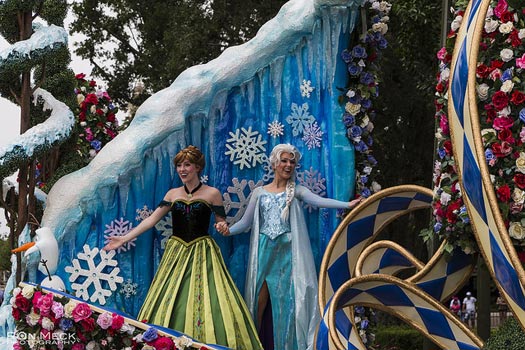 Additionally, “For the First Time in Forever: A Frozen Sing-Along Celebration” takes place in the Premiere Theater almost hourly. Wandering Oaken’s Trading Post & Frozen Funland are located in Soundstage One near the Toy Story Mania ride. There’s an ice rink and a (real) snow play area for children. Ice skating is available – $10 for 30 minutes – and includes skate rental.

Under the Californian sun, Disneyland is one of the most “Frozen” places on earth. The sisters dispense “goodwill greetings” at Disney Animation in Disney California Adventure Park.  At the Animation Academy, a Disney animator teaches park goers how to draw a snowman. “For the First Time in Forever: A Frozen Sing-Along Celebration” takes place at the Crown Jewel Theater (formerly Muppet*Vision 3D). Olaf is giving away warm hugs at Stage 17 and there’s real snow, food and drinks with Arendellian entertainment. Hollywood Land is hosting Freeze the Night Family Dance Party, with music from DJ Snow, interactive fun at The Ice House, a dance crew and more. 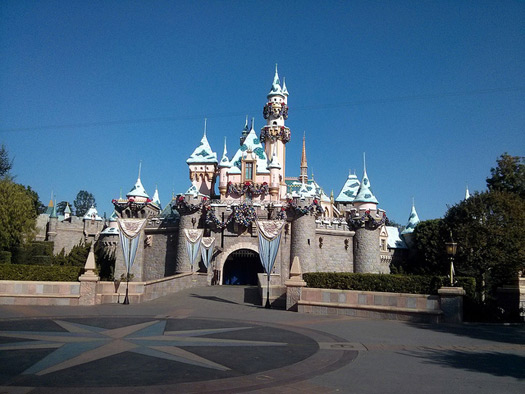 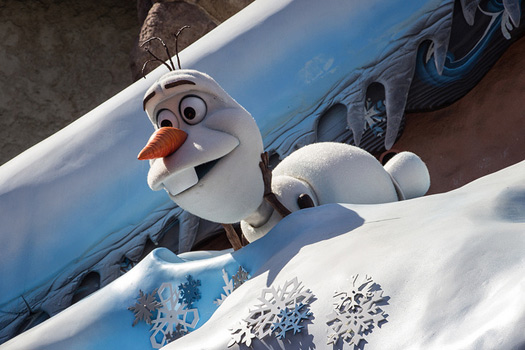 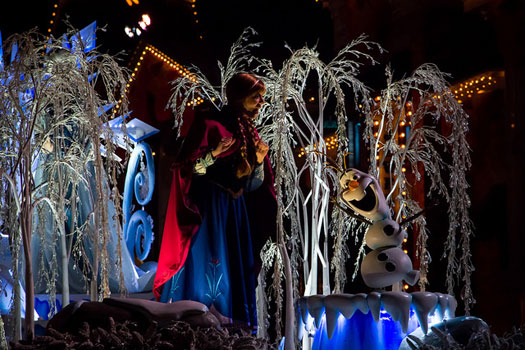 Anna and Elsa will hold court at the Princess Pavilion in Fantasyland until Jan. 7. The night-time show Disney Dreams®! of Christmas will be conducted by Olaf who steps out of “Frozen” to conjure up the projections, fountains, special effects and fireworks.

In many shopping malls around the United States, Santa Claus is almost an afterthought this year. Westfarms joined forces with Disney to bring the movie attraction to Connecticut. There’s a 30-foot Ice Palace with falling snow, a light show and other family activities. Interactive globes highlight favorite movie scenes. Adults and children can leave their hand print in ice at The Icy Hand Print experience and have their photo taken with Olaf (in plush form) at the Ice Throne. Taubman Centers Inc. has built 30-foot tall ice palaces in 10 of its malls, complete with clips from the film, snow and a light show.

The Disney on Ice shows that are mega popular in the United Kingdom, United States and Canada (and slated for Australia in 2015) feature Mickey and Minnie Mouse along with a line-up of Disney princesses and favorite characters. This year, a “Frozen” show has joined the line-up for this touring series of festivals on ice. What better place to bring all characters, songs and special effects to life than on a glistening stage of ice!

Norway is the home of “Frozen.” After all, it’s where Art Director Michael Giaimo found the color, light and atmosphere he wanted. 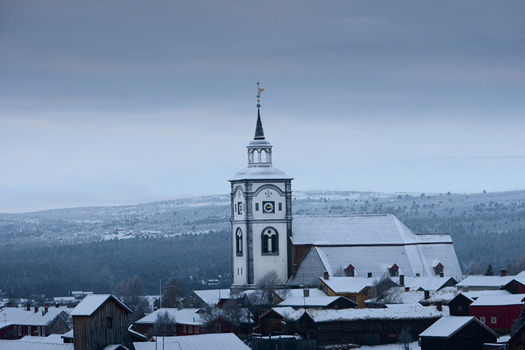 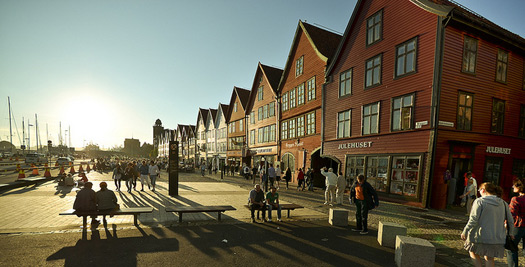 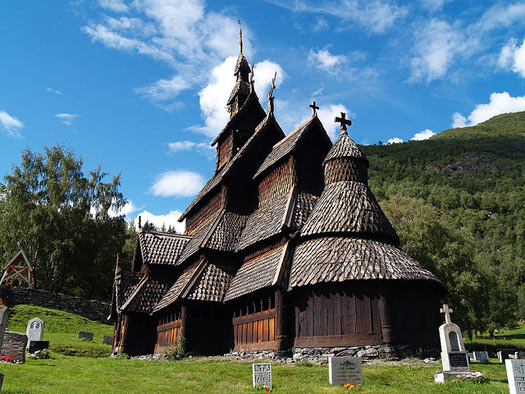 Norway has made a bid to take ownership of the “Frozen” phenomenon. It has some superlative goodies. For example, the Northern Lights, which dance across the sky when Anna and Elsa are children.

Northern Norway sells Ice-Age Arendelle exceptionally well with the snow-capped mountains of Helgeland, peaks of Lofoten and the Lyngen Alps. There are cozy ice hotels, the Sami and trolls. Legend has it the towering peaks of Northern Norway are trolls that were turned to stone in the light of the rising sun.

Disney has a foothold here too. Adventures by Disney offers special itineraries that start in Bergen (the city that inspired Arendelle) stop in Geirangerfjord and mix in Norwegian folk dancing, ice fishing and Stave church visits.

Kristoff is a Sámi – an indigenous people from the Arctic region of Sámpi. If you want to live like Kristoff for a short while, utti Sámi Siida is a Sámi ecotourism company in Jukkasjärvi village, in the far north of Sweden. Between December and April, guests can share their way of life – driving reindeer, sleeping in cozy cabins and in a tepee (lávvu). Don’t worry, you don’t have to share your carrots with your reindeer. 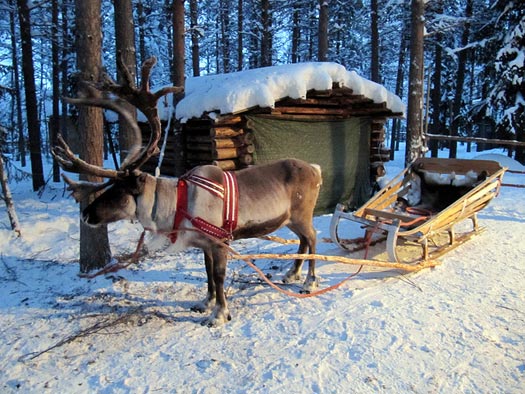 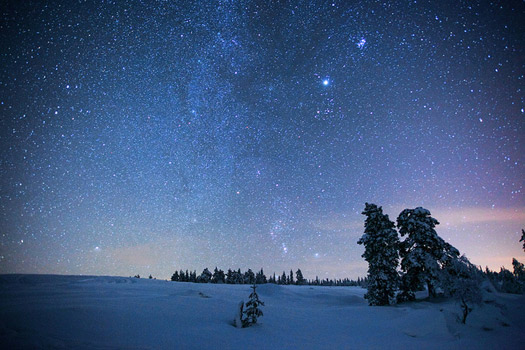 At the top of the world. A starry night in Lapland. Photo: Eddie Yip

Build-A-Bear Workshops have teamed up with Disney on a range of “Frozen” bears – and a snowman. There are close to 400 Build-A-Bear workshops around the world where children can create Olaf, Elsa or Anna, complete with wigs, crystal appliqued dresses and capes. Plus for around $25 children can carry home their very own “Frozen” bear. Kiddies can also add “Let It Go,” “In Summer” and “The First Time in Forever” songs or sing their own version for $8. 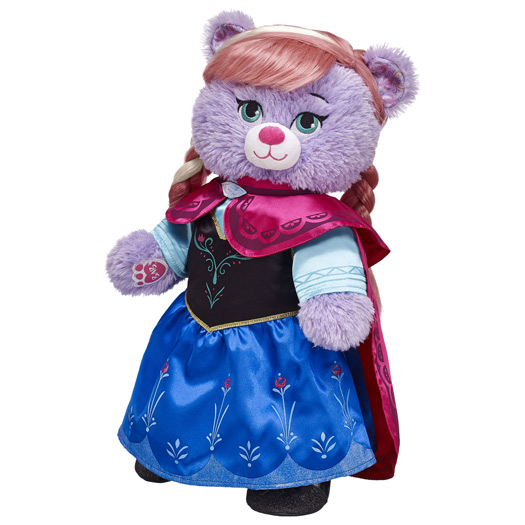 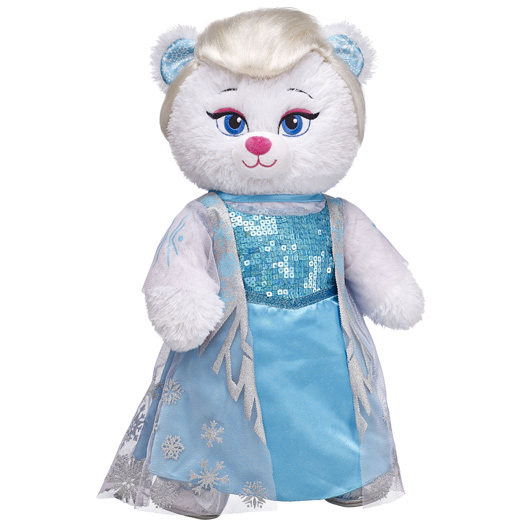 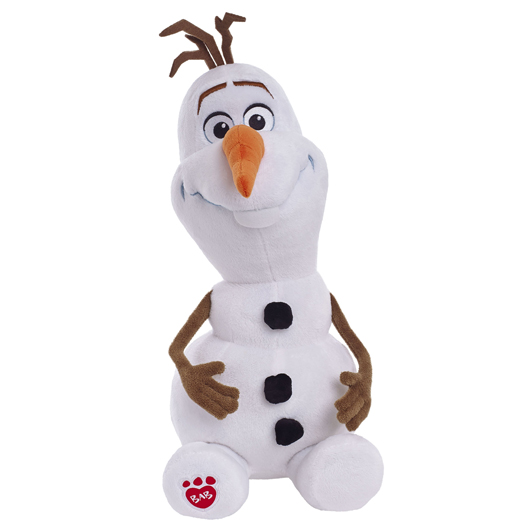 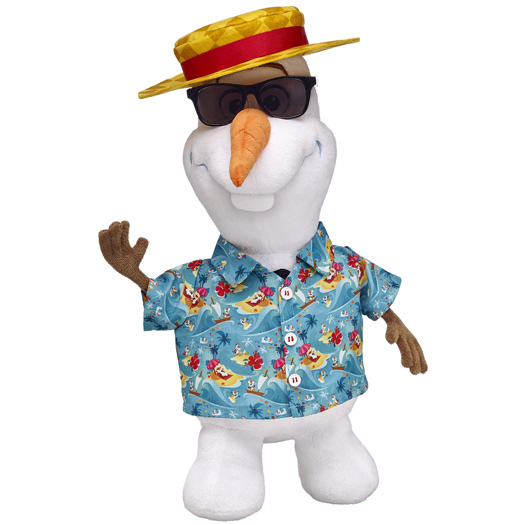 Earlier this year, Disney put out a special sing-along version that hit 1,000 theaters around the United States. The version featured on-screen lyrics with a magical bouncing snowflake to follow along.

Around the United Kingdom, Singalonga Productions screened the film with the lyrics to help audiences sing along with Anna and Elsa. Live hosts show you how to use your free prop bag, warm up your singing voices and teach you some hand actions and heckles before you sit back and “Let it Go.” The London showing is at the Prince Charles Cinema. 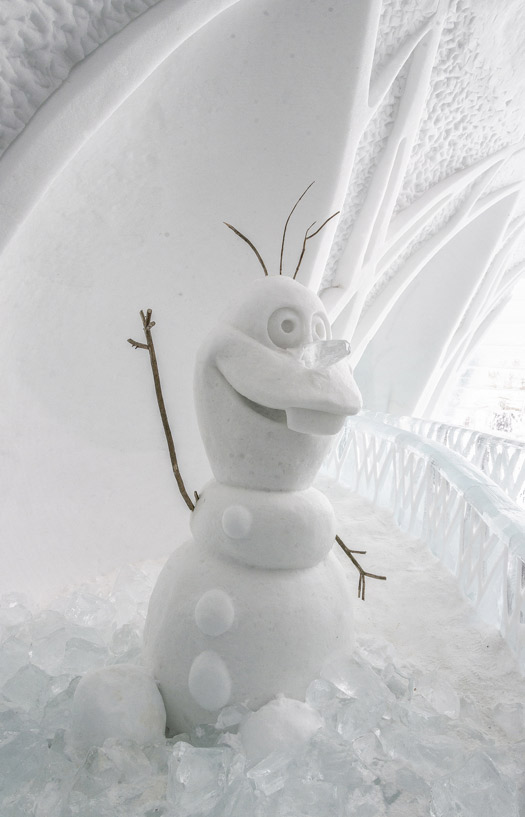 Do you want to build a snowman? At the Ice Hotel Quebec. Photo: Matias Garabedian

There are dozens of ice hotels around the world. Sorrisniva Igloo Hotel, located at Alta, Norway, has been rebuilt every year since 1999. “Arctic Light and Life” is the theme for the 2014/2015 season. 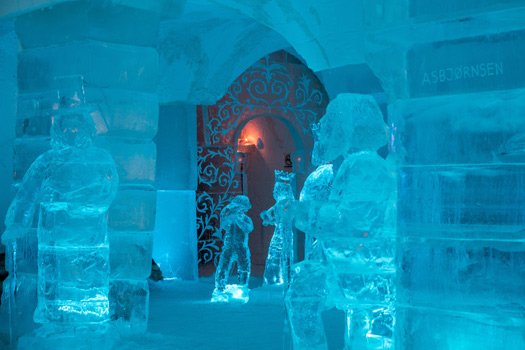 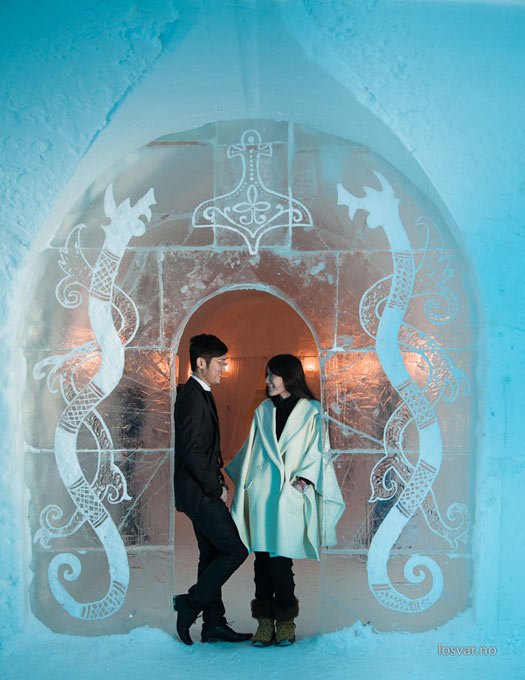 The theme for the next season is “Arctic Light & Life”. Photo: Sorrisniva AS

Everyone’s favorite Disney ride is turning 50 this year -- Mickey Mouse and friends are celebrating the anniversary of “It’s a Small World.”
Marissa Willman

Don your warmest clothes and enjoy a last-minute Christmas-y getaway...or get inspired for next year!
Claire Bullen

CheapflightsQuirky travelBuild a “Frozen” vacation: 10 places to soak up the Disney magic