Traveling often brings out another side of people. It’s a time to relax, let your hair down, check out (and log out) of your daily grind. And with this great power comes a great lack of responsibilities. So, for many travelers, this means starting the celebration early — at the airport. Airport bars provide the perfect place to kickoff your getaway and get into that vacation state of mind, and many continue the celebration on the plane.

However, it turns out not all travelers embrace this view point. We recently surveyed over 1,000 Americans on their drinking habits when flying. Our finding? Americans are as divided on their travel drinking habits as they are on many other fronts. So, how does your celebratory style compare with the rest of the country? Read on to find out. 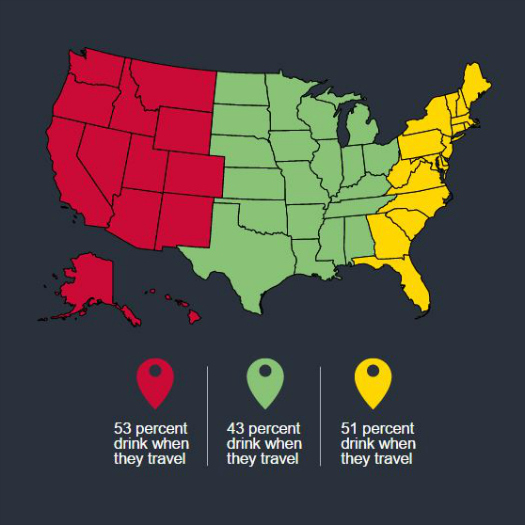 Your tendency to imbibe when you fly may depend on geography. Fifty-one percent of respondents from the Eastern Seaboard and 53 percent from the West (Mountain and Pacific regions) report drinking when they travel, while only 43 percent of those from the middle of the country (east of the Rockies and west of the Appalachians) do the same. In fact, 22 percent of New Englanders who drink when they travel report heading the airport bar every time they fly. However, the country is agreed on the main reason why they drink at the airport — there’s nothing like a long layover to drive fliers to the nearest bar (34 percent of drinkers report this).

The price is right 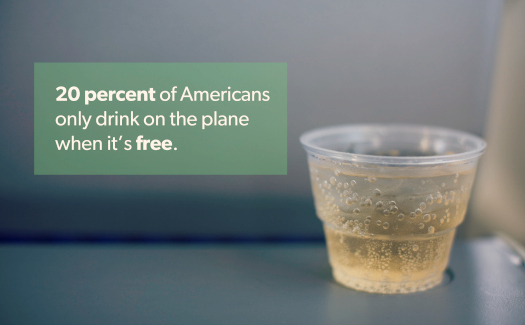 Of all of those surveyed, 37 percent admit to drinking on the plane. But, free is key — 20 percent of Americans will only partake when they don’t have to pay. Women are more likely to splurge on an in-flight cocktail than men (18 percent of women only drink when it’s free vs. 21 percent of men). Perhaps saving money on in-flight beverages leaves more money to spend on booze later; seven percent of Americans spend more on drinks than food when on vacation. And men tend to spend more on alcohol than women. Ten percent of the men surveyed report having a bigger bar tab than food bill at the end of a trip, while only five percent of women say the same. This may be surprising to some, considering the drink of choice of men vs. women. 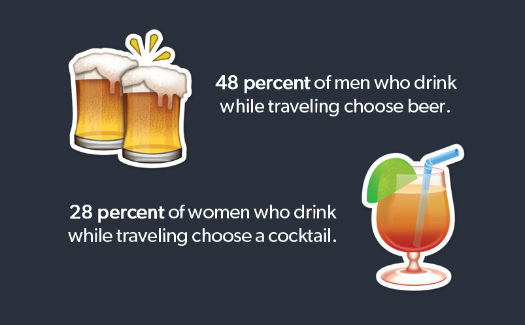 While 79 percent of men and 73 percent of women who drink when they travel do spend some time in an airport bar, their drinks of choice are very different. The vast majority of men (48 percent) opt for a quick beer or two, while the majority of women (28 percent) choose a fun cocktail or two, closely followed by a glass of wine or two (26 percent). However, men who drink while traveling may not hold their liquor as well as their female counterparts. Twenty percent of men who drink cop to being intoxicated in the airport or on a flight, while only 11 percent of women report the same. 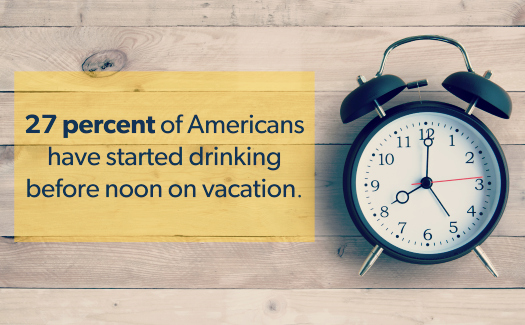 When you’re on island time, all bets are off, right? No matter that you’re still in the airport and your flight is bound for Chicago. Thirty-nine percent of Americans who drink when they travel admit to drinking earlier in the day than usual on flying days. And 27 percent of all those surveyed admit they’ve started drinking before noon when on vacay. Six percent of Americans have even had their first adult beverage before 8 a.m on a trip. But boozing before breakfast seems to be more popular with the men (11 percent of men vs. two percent of women). Hey, it’s five o’clock somewhere.

Modern travel: A survey of when, where and why Americans search for travel

When it comes to travel planning, we’ve never had more options. From access to mobile flight search to a constant social...
February 23, 2017‐Amanda Festa

Our American Travel Pulse as it captures the emotional heartbeat of the nation's vacations.
January 23, 2014‐Melisse Hinkle

The waiting game: A survey of Americans’ airport security experiences

If you’ve been to an airport recently, you’re probably all too familiar with the longer-than-usual wait times. The security line...
June 1, 2016‐Amanda Festa