If you’ve been to an airport recently, you’re probably all too familiar with the longer-than-usual wait times. The security line struggle is real for American travelers prepping for summer getaways this year.

While tales of TSA tribulations are heard daily and a hashtag (#IHateTheWait) has provided waiting passengers with a forum for voicing their gripes on social media mid-security line, we decided to take a closer look at the recent airport experiences of American travelers.

We surveyed more than 2,000 Americans between May 26 and May 29 to see how the airport security slowdown has impacted the way people are thinking about the pre-flight process. 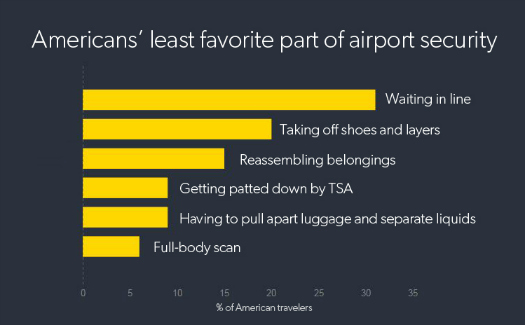 Fifty four percent of American travelers who have flown in the last 90 days report having been caught in a long security line during the last few months, with 7 percent even missing a flight because of it. But it appears travelers are learning from this cautionary TSA tale. While less than half of American travelers arrived at the airport two or more hours ahead of their last domestic flight, 59 percent are planning to be there at least two hours in advance for their next trip.

When it comes to going through airport security, waiting in line is by far the most dreaded part of the process — a whopping 31 percent of those surveyed say it’s their least favorite part of the airport security struggle. Twenty percent cite stripping down — taking off shoes, belts and layers — as their least fav, while 15 percent think redressing and reassembling their belongings after the fact is the worst. Nine percent of those surveyed say their biggest gripe is getting patted down by TSA, which is tied with the tedious task of separating out liquids and laptops from luggage. Rounding out the list, 6 percent dislike the full body scan most.

While taking off shoes, belts and other accessories is a tedious task for all, men are more likely to be bothered by the effort than women (23 percent vs. 17 percent). On the other hand, twice as many women as men rank getting patted down by TSA as the security low point (12 percent vs. 6 percent). 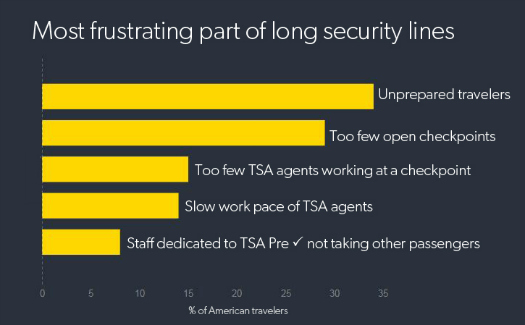 When waiting in a long security line, nothing is more frustrating (for 34 percent of those surveyed anyway) than fellow passengers slowing down the line by not being prepared. For 29 percent of Americans, the most frustrating part of the wait is too few security checkpoints open. Others believe there are too few TSA agents working at each checkpoint (15 percent), the agents working are operating at too slow a pace (14 percent), or that staff dedicated to TSA Pre✓ aren’t taking enough other passengers when they can (8 percent). 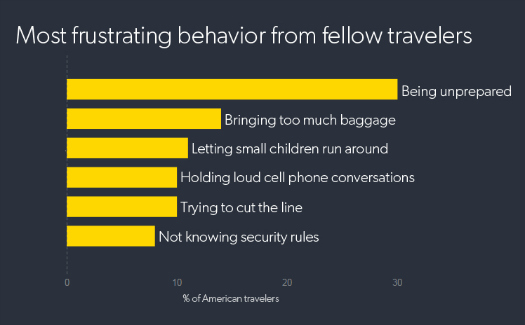 When it comes to frustrating behaviors seen in the security lines, there are plenty to choose from. (Who hasn’t dealt with a few of these security line staples?) Thirty percent of those surveyed say the most frustrating behavior from fellow passengers is when they’re not prepared to get their belongings or themselves through security when it’s their turn. The second biggest gripe? Travelers who clearly bring too much baggage through the checkpoint (14 percent).

While unprepared travelers are a source of ongoing frustration for the majority of travelers, 84 percent of Americans believe they are not part of the problem, reporting they always plan ahead in how they pack and/or dress to make sure they are prepared for the process.

TSA has touted the benefits of its Pre✓ program, which allows for a faster more streamlined security experience, but 62 percent of those surveyed say they have no plans to enroll in the program. Their top strategy for getting through security faster? To fly at off hours or on less busy travel days (38 percent).

Are you flying this summer? Check our 16 rules of airtiquette: Airport edition to make the best of your airport security experience, and share your tips for a faster, friendlier experience in the comments.

10 people you see in the airport security line

You know the feeling. You check in online, drop your bag curbside and head toward the security checkpoint at a...
Amanda Festa

Airports have gone to the dogs (and, in some places, cats). Jet-set pets looking for pre-flight places to do their...
Lauren Mack