When it comes to travel planning, we’ve never had more options. From access to mobile flight search to a constant social media stream of travel photos and flight deals, travel inspiration is literally in the palm of your hand.

Cheapflights surveyed over 1,000 Americans on their travel habits, from dreaming to doing and everything in between. So how do your travel search habits stack up? Read on to find out. 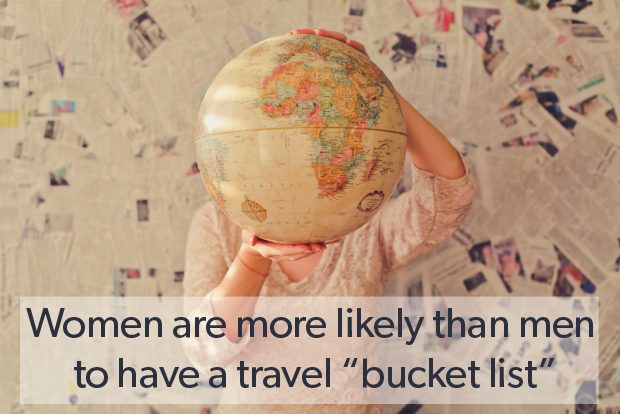 A travel “bucket list,” whether it includes wine tasting your way through Italy or bungee jumping in South Africa, has become central to Americans’ vacation planning. In fact, 64 percent of those surveyed say they have bucket-list destinations in mind. But women are more likely than men to have a travel bucket list (68 percent vs. 59 percent).

Perhaps that’s why more women cite “adventure and exploration” as their primary reason for travel (26 percent), while men’s top reason is “rest and relaxation” (29 percent). Women are also more likely than men to travel for family commitments (13 percent vs. 10 percent) and time away with family and friends (19 percent vs. 11 percent), while men are more likely than women to travel for work commitments (six percent vs. four percent) and rest and relaxation (29 percent vs. 23 percent).

From a bad day to a great deal 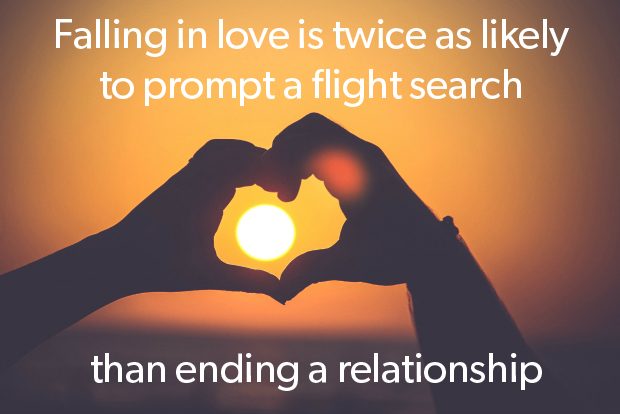 A staggering 73 percent of Americans report they are likely to start searching for flights when they hear about a good deal. This is especially true for women, with 76 percent saying a deal will get them searching, whereas 68 percent of men do the same.

Men are also more likely than women to search for flights while they are still on vacation (11 percent vs. 7 percent) and when they fall in love (seven percent vs. five percent). But generally speaking for both men and women, falling in love is double as likely to prompt a flight search than ending a relationship (six percent vs. three percent).

Flight search on the go (and while you go) 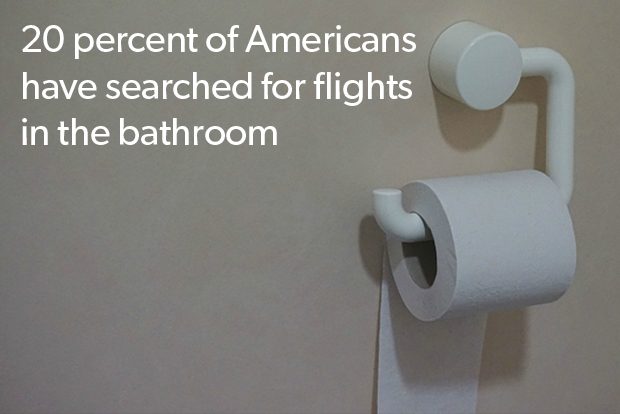 In our mobile world, searching for a flight is easy to do anytime… and anywhere. The most popular place for Americans to search for flights? Americans are putting down the remote and picking up their mobile device or laptop, with 72 percent of respondents saying they search while watching television. Searching for flights while eating lunch at their desk is a not-so-close second (38 percent). And, wouldn’t you know it, 20 percent have searched for flights while in the bathroom. Women are more likely than men to search while watching TV (75 percent vs. 68 percent), but men are more likely to search in the bathroom (21 percent vs. 19 percent). Perhaps, they are searching during commercial breaks?

Travel habits from coast to coast 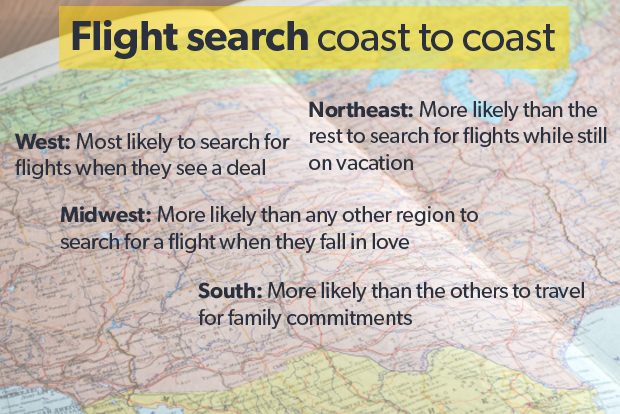 The West appears to be most tuned in to finding a good deal, with 79 percent of Westerners reporting they search for a flight when they catch wind of a bargain. On the flip side, Midwesterners are least likely to search when they see a deal; 69 percent report doing so.

However, Midwesterners do appear to be the romantics of travel search, leading the pack when it comes to searching for flights when they fall in love (eight percent); only five percent of the rest of the country say the same. And Southern hospitality only goes so far when it comes to searching for flights; Southerners are more likely than any other region to search for flights when fighting with their significant other (three percent).

When it comes to why people travel, the primary reason differs across the country. Thirty-one percent of Westerners cite “adventure and exploration” as their primary reason for travel (only 21 percent of Northeasterners say the same). The Northeast, on the other hand, reports “rest and relaxation” as their primary goal (34 percent), while only 18 percent of Westerners claim the same. More than any other region, the South reports traveling for family commitments (15 percent), while only nine percent of Northeasterners and 10 percent of Midwesterners say the same.

What inspires you to travel? And where’s the weirdest place you’ve searched for a flight? Let us know in the comments below.

Modern travel: A survey of when, where and why Americans search for travel was last modified: June 26th, 2019 by Amanda Festa