Mardi Gras, the wintertime carnival synonymous with purple, green and gold beaded necklaces, elaborate parades and weeks of partying, is back. While New Orleans hosts the most famous Mardi Gras celebration in North America, there are plenty of North American cities large and small that host enviable – and often free – celebrations.

Mardi Gras celebrations have been traced back to pre-Lenten Christian celebrations in ancient Greece and Rome. Parisians have been celebrating Mardi Gras since the Middle Ages. The tradition is said to have made its way Stateside in 1699 when French explorer Pierre Le Moyne d’Iberville landed on the west bank of the Mississippi River.

Inspired by the colonial influences of the French and Spanish, cities like Mobile, Ala., Biloxi, Miss. and Pensacola, Fla., began their own carnival-like celebrations. Many towns begin the revelry on Epiphany (Jan. 6), the day the three kings are said to have brought gifts to the baby Jesus, and continue until Mardi Gras, French for fat Tuesday (also known as Shrove Tuesday), the day before Ash Wednesday, which is the start of the season of Lent, a period of 40 days of sacrifice and reflection observed by many Christians.

Krewes (social clubs) plan a series of events like formal balls, elaborate parties and colorful parades of masked marchers who toss “throws” – everything from strands of plastic beads to colorful doubloons to hand-painted coconuts and hand-decorated shoes. Let the revelry begin. 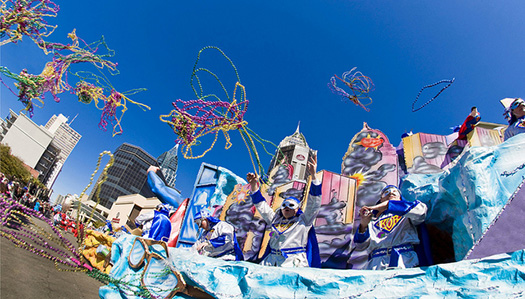 The birthplace of Mardi Gras celebrations in the United States, Mobile, Ala. has been hosting parades since the first parade in 1703, a year after the city’s founding. This year, there are more than 40 colorful parades in the two-and-a-half week Mardi Gras celebration in Mobile, Ala. Costumed krewe members of all ages throw beads, trinkets and moon pies (marshmallow tucked between two graham cracker cookies and dipped in chocolate) in every size and flavor.

The biggest day of celebrations here is not fat Tuesday, but Joe Cain Day on the Sunday before fat Tuesday. Named in honor of Joe Cain, a city clerk who is credited with reviving the city’s Mardi Gras tradition after the Civil War, the day is marked with a multitude of parades in the afternoon and evening. Don’t miss the Coronation of King Elexis on Sunday, the Lundi Gras parades on Monday and the finale Order of Myths Parade on Tuesday. 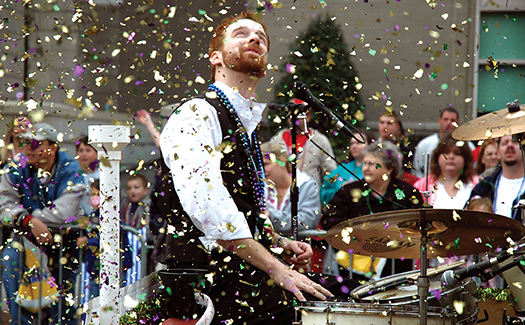 The Redneck Riviera has been celebrating Mardi Gras since 1874. (Image: Visit Pensacola, Inc.)

Since 1874, Floridians have been celebrating Mardi Gras in Pensacola with parades, food and fun. The festivities kicked off Jan. 18 with the inaugural “Krewe of Blues” BBQ cook-off and bead swap. A series of non-traditional parades are held during the early days of Mardi Gras celebrations in the Redneck Riviera like the Pirates of Lost Treasure Mardi Gras Krewe’s boat parade off Perdido Key and the Kids and Kritters Parade on the sugar white sands of Pensacola Beach.

The festivities culminate with the more spirited night-time Krewe of Lafitte Parade on Feb. 13, which features 12 floats, one live canon and 250 pirates who march down Palafox Street in downtown Pensacola; the Grand Mardi Gras Parade in historic downtown, the largest parade with 250 floats and costumed krewes; and the Krewe of Wrecks parade on Via De Luna, the main street on Pensacola Beach. The most sought-after throw here is the moon pie. The festive finale is the Priscus Procession, a nighttime pub crawl downtown with krewe kings and queens, krewes and revelers, on fat Tuesday. 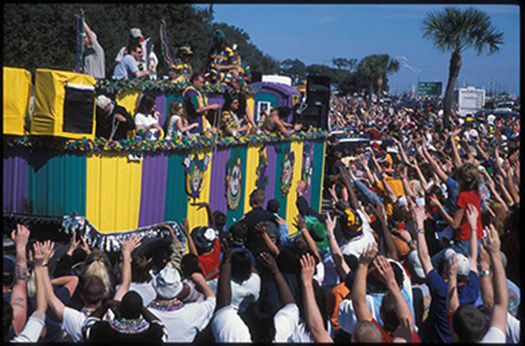 Since its first Mardi Gras parade on Mar. 3, 1908, Biloxi, Miss. and neighboring towns have been throwing memorable beachfront parades, barbecues and parties with authentic Mississippi Gulf Coast hospitality and flair. Mardi Gras celebrations kick off on Friday with the return of the Biloxi Night Parade in Ocean Springs, Miss. 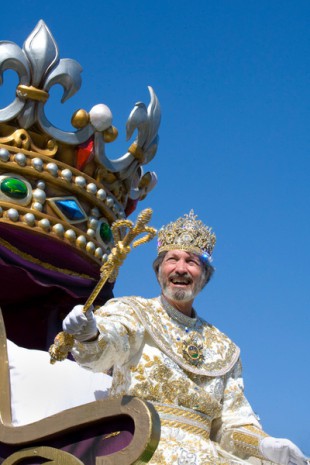 Experience joie de vivre with locals and visitors who converge on Louisiana’s second largest Mardi Gras celebration in Lafayette. Folks here have been celebrating since the first parade and Mardi Gras ball were held in 1869. The area still hosts one of the oldest Mardi Gras traditions, the Courir de Mardi Gras, a rite of passage for many young men who, at the beginning of carnival season, roam the countryside on horseback ‘begging’ for ingredients for gumbo by dancing and singing for homeowners who give them rice, onions, flour and chicken. The day ends with lots of gumbo and a fais-do-do (Cajun dance party).

Lafayette’s Mardi Gras celebration kicks off on Friday with an evening parade. The weekend revelry includes Le Festival de Mardi Gras a Lafayette, a five-day celebration with carnival rides, Cajun food and concerts which complement the numerous parades like the Children’s Parade on Sunday, Queen Evangeline Parade on Monday and the Southwest Mardi Gras Association Pageant & Ball on Tuesday. Make sure to catch the many throws like beads, cups and doubloons, many emblazoned with krewe emblems. The best vantage point is from the Le Festival de Mardi Gras a Lafayette at Cajun Field where all the parades traverse. Make a sign to take to the parade to let float riders know you are visiting from out of town and you’ll be showered with beads. In between parades, festival-goers can feast on local Cajun specialties. 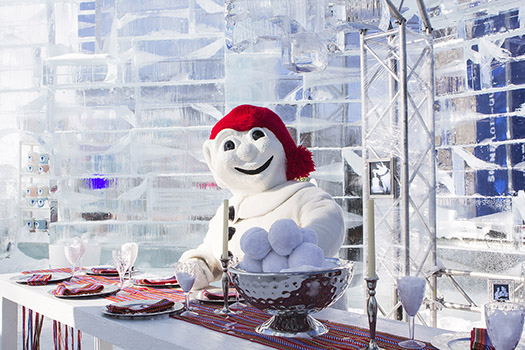 Beginning in January, small statues and placards of carnival mascot Bonhomme, a pudgy, smiling snowman adorned with a red tuque (hat) and ceinture fléchée (a colorful sash) at the waist are plastered throughout Québec City. His appearance triggers excitement in the countdown to the pre-Lenten winter carnival, which annually attracts more than a half million revelers.

The 61st Québec Winter Carnival features more than 200 activities during the 17-day, $10 million celebration, much of which centers around Bonhomme’s World on the Plains of Abraham. Wintery activities include snowshoeing, ice canoeing, ice bumper cars and a sleigh race. Highlights of the festivities include a ‘snow bath,’ an icy plunge in the water, and the night parade on Saturday.

The city’s carnival celebrations began in 1984 when local residents wanted to bring excitement to the winter season. Over the years, the celebration has expanded to a winter carnival with an ice castle, snow sculpture contests and quintessential carnival treats.

Try maple toffee pulls (boiling syrup poured over snow and rolled onto a wooden Popsicle stick;) BeaverTails (deep fried dough in the shape of a beaver tail slathered with sweet toppings like chocolate) and Caribou (red wine, maple syrup and brandy, whiskey or vodka served piping hot in red and white plastic canes which serve a dual purpose – a container for the boozy beverage and a cane to steady drinkers.) 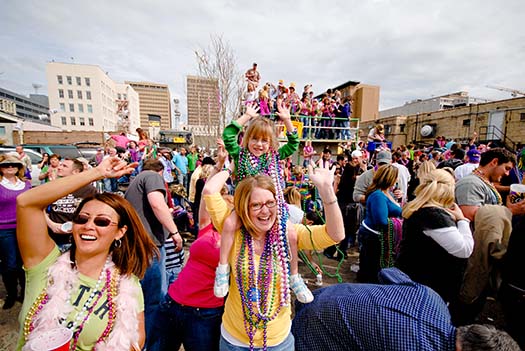 A week before the Spanish Town Parade, a highlight of Baton Rouge, La.’s Mardi Gras celebration, a local krewe populates Louisiana State University lakes with seven-foot-tall wooden pink flamingos for locals to “steal” in the middle of the night to take to their homes to display on their yards or place in their windows during Mardi Gras celebrations.

Make sure to go to Saturday’s Krewe of Spanish Town Parade and keep an eye out for the Krewe of Yazoo, a lawnmower brigade that performs choreographed moves while pushing their lawnmowers. Unlike other small towns, Baton Rouge’s parades end before fat Tuesday this year. 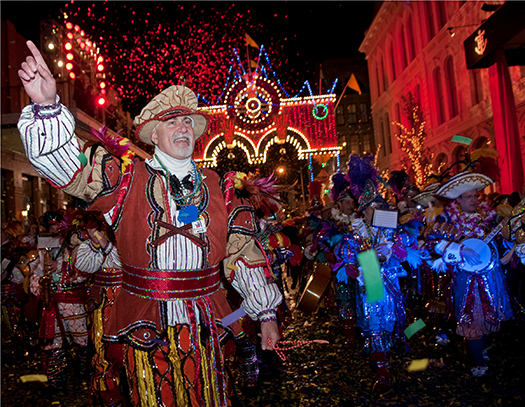 Parades of high stepping marching bands, masked dancers and elaborate, formal masquerade balls have been the hallmarks of Galveston, Tex.’s Mardi Gras! Galveston celebration since 1867. After a halt to the revelry in 1941 due to World War II, Mardi Gras celebrations resumed in 1985 and have grown to become the third largest in the U.S. Pet-lovers join the excitement at the Krewe of Barkus & Meoux pet parade and children march in the Children’s Parade on the Seawall.

“The Voice” season 4 winner Danielle Bradbery headlines a concert at Saengerfest Park on the second weekend of festivities. The Krewe d’Esprit Rosaire hosts its annual Battle of the Bands Saturday morning before their popular Mardi Gras parade. The largest Mardi Gras parade in Galveston, the Knights of Momus Grand Night Parade, is also on Saturday. 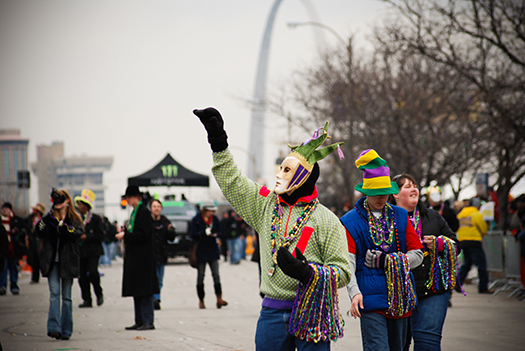 The time-honored tradition of mock royalty tossing colorful plastic beads to parade-goers is a longstanding tradition in St. Louis, Mo. Krewes throw 17 million beads each year – and that’s the only throws you’ll find in these parts.

This year’s St. Louis Mardi Gras celebration includes a free block party on Saturday as well as the main event – the Bud Light Grand Parade. The Bud Light Grand Parade is the Midwest’s largest parade which begins at Busch Stadium and ends at the Anheuser-Busch Brewery, which features 100 floats from which 10 million strands of beads are thrown. 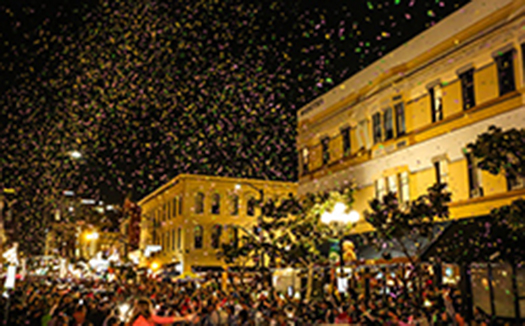 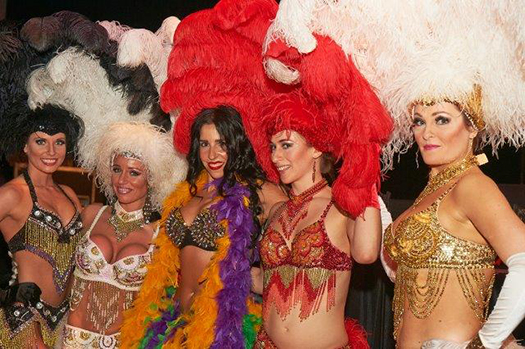 New Orleans-style fun, from food to entertainment, is transported to Winnipeg for the 10th annual Winnipeg Mardi Gras. The two-night, adults-only affair at the RBC Convention Centre Winnipeg features live music by New Orleans’ Dwayne Dopsie and the Zydeco Hellraisers; entertainers like acrobatics, jugglers and stilt walkers; a “Bourbon Street” filled with costume vendors so partiers can buy carnival gear and join the parade; and Cajun cuisine like oysters, crab cakes and gumbo. It wouldn’t be a Mardi Gras celebration without a parade with costumed characters throwing colorful strands of beads to 3,000 revelers.

Putting a unique twist on the carnival costume tradition, Friday is Zombie Night. Guests are encouraged to arrive in full zombie costume and makeup to gain free admission. Single revelers who attend on Saturday are offered a red heart to wear on their sleeves in the hopes Cupid works his magic on Valentine’s Day (Tickets: $16; must be 18-years-old or older). 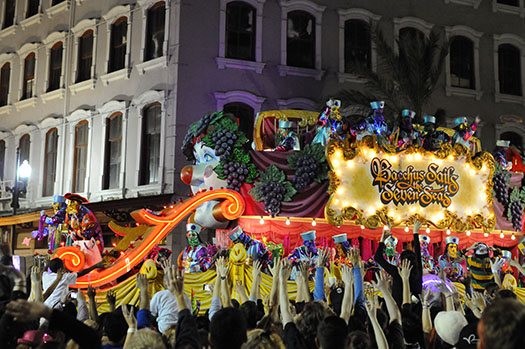 New Orleans hosts the largest Mardi Gras celebration in the U.S., annually, attracting more than 1 million revelers. While Mobile, Ala. is the birthplace of Mardi Gras, New Orleans was the first city to hold parades on Mardi Gras. Festivities began on Epiphany (Jan. 6) and the first parade on Jan. 31.

The music, floats and revelry continue throughout February and are ratcheted up Feb. 12-17, culminating with fat Tuesday celebrations. The most coveted throws like colorful beads, plastic coins and glittery trinkets and elaborate parades by “super krewes” like Endymion (known for its intricate LED-lit floats) on Saturday, Bacchus (the first super krewe) on Sunday and Zulu (a historic African American krewe famous for its hand-decorated coconuts) on Tuesday.

Those looking for less raucous and crowded affairs can attend a number of smaller parades in the French Quarter like ‘Tit Rex (or Petit Rex) with tiny hand-pulled and satirical floats; Barkus, a dog parade with dogs dressed in a variety of handmade costumes; and Chewbacchus, a Star Wars-themed parade with hand-made throws. Make sure to eat one of the more than 500,000 king cakes (braided purple, gold and green cakes with a hidden plastic baby inside) made by Haydel’s Bakery.