Whether it’s your first flight of the year or your 50th, there are certain characters you’re bound to encounter every time you go to the airport—and there’s no better time to people watch than during the busiest travel season of the year. From frequent flyers to the honeymooners to old high-school acquaintances, here are the 11 people you’ll run into while traveling home for the holiday season. 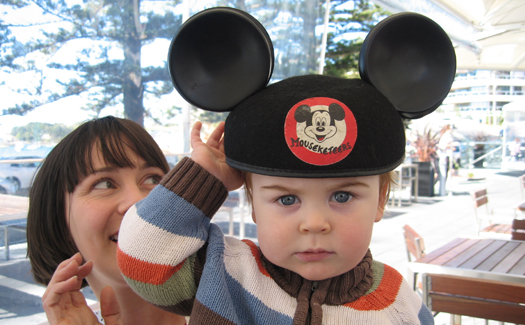 Craig Brown, Henry, the mouse ears and mummy via Flickr (CC BY 2.0)

Maybe they just have that Orlando-bound glow, or maybe it was the fact that all eight of them are wearing Mickey Mouse ears. Either way, you know exactly where this family’s headed and you’ll do everything in your power to not get stuck in the security line behind them. That little one in the cargo shorts looks like he’s got some serious pocket coinage going on.

So maybe he needed a couple of extra semesters to graduate, but that’s not going to stop him from meeting up with his uni-bros overseas. With a muscle tee from his alma mater complementing the pallid glow of someone who’s just emerged from four years in the library, this guy’s either heading to Bangkok or Hvar or somewhere he can’t pronounce in Vietnam (he just calls it ‘Nam).

The girl who missed her flight 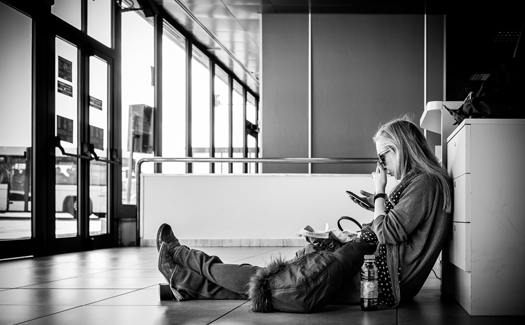 “But… I thought… LaGuardia and JFK… were… the same…” you hear her hiccup to the attendant between sobs. She’s holding up the line, but we’ve all been there, and it sucks. This twenty-something solo traveler will be flip-flopping between sassing the attendant and frantically wailing to her mom on the phone (all of her social graces are long gone by this point). Buy her a peppermint mocha and reassure her she’ll get home in time for Christmas. 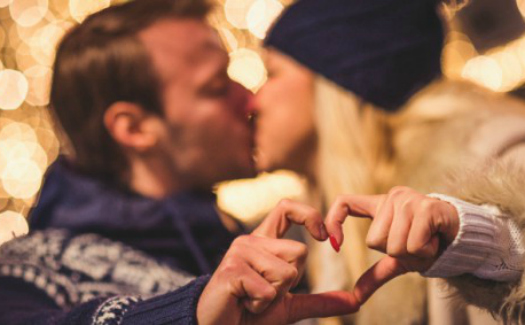 Maybe they’re making a silhouette of a heart with their hands and trying to get a shot of the plane through it, or maybe they just always seem to be holding each other up. These two are milking their newlywed status so hard, they’re practically dragging tin cans behind their suitcases. Try to beat these two to your gate before they butterfly-kiss their way to first class.

His suitcases (plural) are criss-crossed with “Heavy” tape. Wrapping paper tubes jut out the sides of his backpack, and his carry-on is definitely pushing the limits of overhead-compartment capacity. Meet the baggage claim Santa: that person who just wasn’t thinking ahead when he bought Mom a crock pot and Dad snowboard boots for Christmas. Lend him a hand if you’ve got one—who knows, it may just get you some nice-list karma. 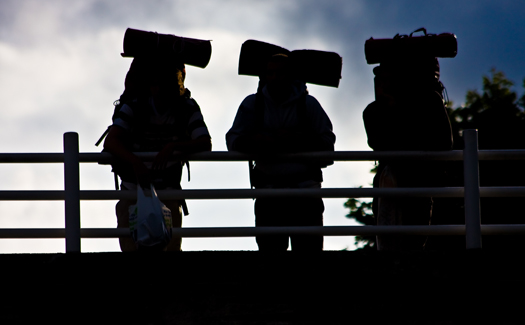 They look like cartoon hot dogs from behind—two tiny legs shuffling under the weight of a 5-foot tall backpack. These are either donned by seasoned travelers on a year-long expedition, or girls who’ve packed every crop top they own for three weeks in Europe.

They’ve accessorized their suits with other suits, carefully hung in garment bags. They swirl whiskey in the first class lounge, chatting on Bluetooth headsets or not at all, only nodding when the airline staff greet them by name. They fly like it’s an elevator ride up to their corner office, and you thought you caught a glimpse of an eye roll when he overheard the girl-who-missed-her-flight freakout.

The woman who packed every liquid and aerosol in her purse 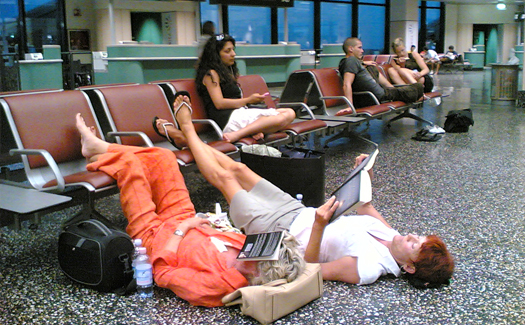 David Mellis, Relaxing in the Airport via Flickr (CC BY 2.0)

“Oh, goodness me,” she chuckles, oblivious to the line of death stares behind her as she pulls out tube after tube of hair serum, hand cream, lip salve, body butter and nail polish. 10 bucks says she’s also the lady stretched across four seats reading an Agatha Christie novel while the rest of her gate perches on the window sill.

In the immortal words of Chandler Bing, “What a small world, and yet I never run into Beyoncé.”

They travel as a muscular pack, each sporting a team jacket and a pair of pristine designer sweats. They hunch their 6-foot-5-inch frames and tug hoodies over their headphones, like that’s gonna stop you from sneakily Snapchatting their every snooze.

The flight attendant who majored in musical theater

There’s that trill that comes over the intercom when she announces your gate—the unmistakeable inflections of someone who has played Dorothy on more than one occasion. Her perma-smile is the kind that stays waxed on even when a motion-sick passenger accidentally misses the paper bag, and you’d put money on her performing her seatbelt demonstration dancing to “Jingle Bell Rock.”