On Saturday, Sept. 16, the mayor of Munich will tap the first keg and Oktoberfest 2017 will officially begin. But, shortly after that keg is tapped and the first liters of beer are consumed, bathroom lines will inevitably form (marking another, albeit unofficial, kickoff to the celebration). During Oktoberfest 2015, 7.7 million liters of beer were consumed (enough to fill three Olympic-size swimming pools). While we’re not sure how that translates into bathroom visits (and you might not want to think of swimming pools while you wait), it’s safe to say, it’s a lot. So, while Oktoberfest may be known for its convivial charm, songs sung on benches with arms around strangers, the universal language of pretzels and bratwurst washed down with liters upon liters of extra-potent beer, a significant portion of Oktoberfest for many is spent locating and lining up for the bathroom.

If you’re heading to Oktoberfest, prepare yourself (and your bladder) for the 10 people you’ll likely meet in line while you wait. And, if you’re not en route to Munich, search flights for next year and live vicariously through the folks below. Prost! – emphasis on the P… 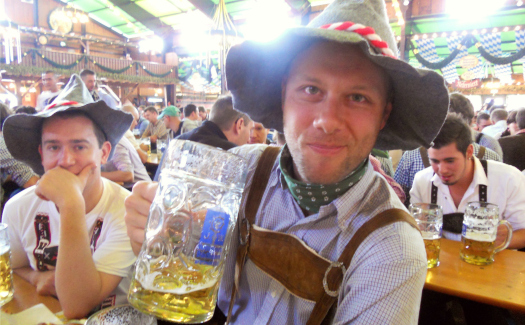 College kids flocking to Oktoberfest is a study abroad staple. Whether they’re there for the experience, the brews, or because they saw “Beerfest” on basic cable is hard to say. But you’ll peep them in line for the bathroom pairing a backwards baseball cap with their lederhosen, or high-fiving other line-goers who already recognize them from moments ago when they emerged victorious in the chugging challenge, guzzling back a liter in less than 10 seconds. Your best bet is to smile and nod and hope the line moves quickly. Perhaps later you’ll meet eyes across the Hofbrau tent and they will give you a friendly nod while belting out John Denver lyrics.

Tip: Thinking of indulging in the chugging challenge next? Before you hop up on your bench, remember Oktoberfest beer is about six percent ABV (stronger than your average beer). 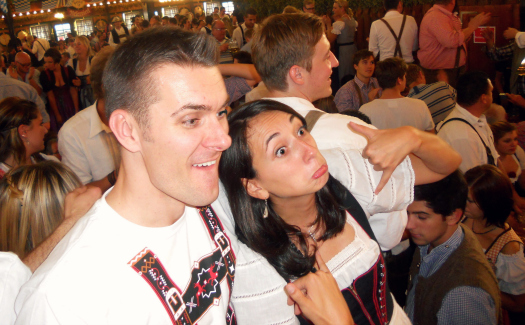 Nothing makes the line go faster than dirndl selfies with besties, significant others or strangers in line, right? Hey, with such fabulous outfits, who can really blame them? However, as a result, your much-needed trip to relieve yourself may result in your permanent residence on this particular festival goer’s Instagram feed. Congrats, you’re famous now – a VI-Pee, you might even say. 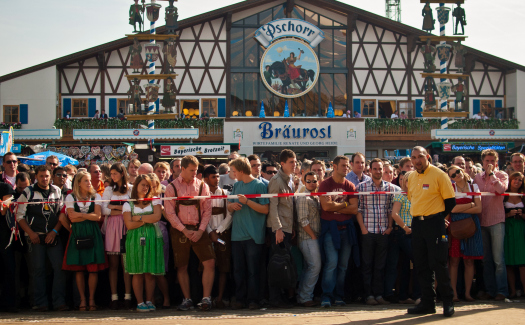 These questionable revelers had one too many steins, which leads them to believe they’re being sneaky as they sway their way through the bathroom line humming the “Mission Impossible” theme song under their breath. Oddly, they’re either 25 or 45 years old (rarely in between), but you’ll be able to pick them out of the crowd from their shifty expression and the unmistakable pep in their step from their empty bladder. 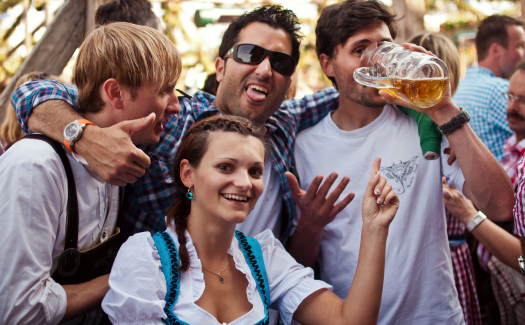 The bathroom line at Oktoberfest is a bit of a Where’s Waldo situation. But instead of a red and white striped shirt, it’s the guy or gal who didn’t get the memo about traditional Bavarian dress, who will be the odd one out. But unlike Waldo, this person’s unimpressive garb is a lot easier to spot. Sure, their cargo shorts may be easier to maneuver than that infamous lederhosen front flap in a restroom situation, but dressing the part is half the fun. What’s a few extra buttons between millions of new friends?

Tip: Hit ReSales before the fest and don’t be that guy (or girl). 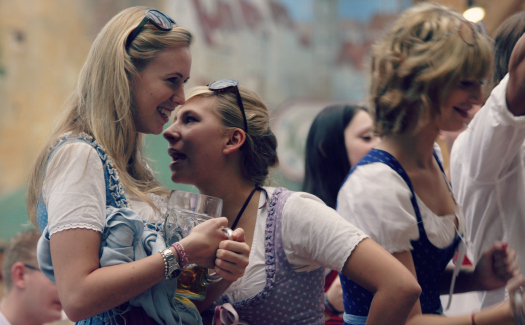 They say alcohol is a social lubricant and at Oktoberfest this is especially true. People from all around the world celebrating, drinking, singing, laughing… and waiting in line for the bathroom together. You may be there to do your business, and probably waited a little too long to do so, but that won’t stop the chatterbox behind you from telling you his or her life story. As long as they don’t start regaling you with tales of running water or days spent at the ocean enjoying lapping waves, you may have just made yourself a new friend. For the next 20 minutes, at least.

Tip: If you’re looking for the bathroom, ask for the “WC” or the “toilet” – it’s closer to the German word (toiletten) and more likely to be universally understood. 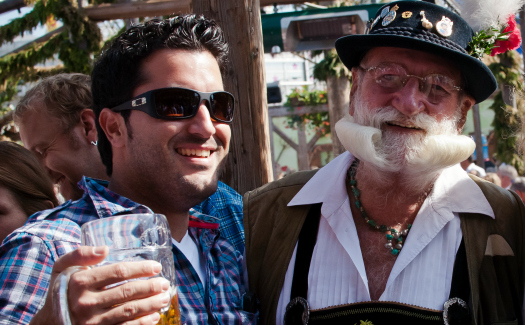 Don’t make the mistake of thinking Oktoberfest is mostly drunk twentysomethings — some festival-goers have spent years refining the art of holding their liquor (and collecting the pewter pins affixed to their woolen Alpine hats). Oktoberfest is popular for all ages, and nowhere will that be more evident than in line for the bathroom, especially in the Löwenbräu-Festhalle tent, where you’ll find one of Munich’s most famous beers. Pick their brains on their tried-and-true festival (and restroom) strategy and enjoy as they regale you with tales of Oktoberfests past. Or perhaps the bathroom line is so long they were 30 when they started. If so, find another restroom stat. 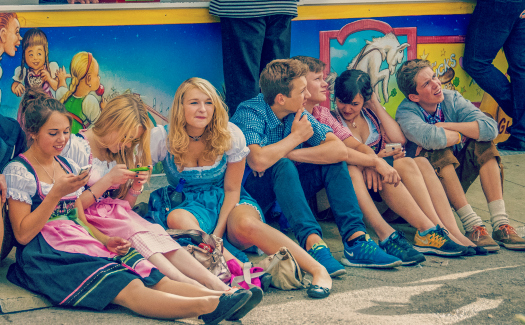 Did you know approximately 70 percent of revelers at Oktoberfest come from Bavaria and 15 percent are from the rest of Germany? Chances are, if you’re traveling from afar to Oktoberfest, you’re in the minority. If you’re looking for an even more authentic experience, go where the locals go — the Schützen-Festzelt tent is on the smaller side and off the beaten path, but it’s popular with the local crowd. Lucky for you, time spent in line means more time to make new friends. Use your time wisely to get tips on which tent to check out next and other hidden gems. If you find yourself faced with a language barrier, there’s nothing like a smile and a raised stein to break the ice. 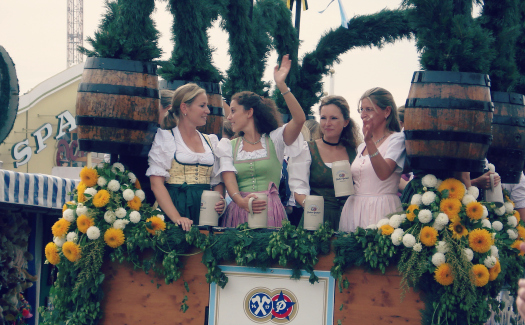 While a number of celebrities have frequented Oktoberfest over the years, from Samuel L. Jackson to Katy Perry, you’re not likely to see them waiting in the average line. However, that doesn’t mean you can’t have a celeb encounter. You may be surprised to learn the reality TV show contestant who came in sixth on “The Amazing Race” or guest starred on an episode of “Criminal Minds” takes off their lederhosen one leg at a time, just like the rest of us. And their 15 minutes of fame will last a lot longer while posting up in one of the tents’ bathroom lines. If you’re looking to star gaze, try the Käfers Wiesn-Schänke tent. It can be tough to gain entry and the food inside is on the pricey side, but you may have your very own bathroom line brush with fame. One pseudo-celebrity you won’t have to stand behind? Paris Hilton. She was permanently banned from the festival after attending in 2006 to promote canned wine while dressed in traditional Bavarian garb — a tacky faux pas you can ponder while you wait. 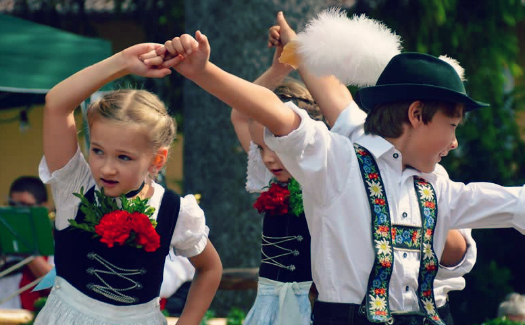 And by that we mostly mean kids. Although Oktoberfest is all about the bier, it’s also extremely family friendly (at least until the late-night crowd rolls in) – with a large carnival that includes carousels, slides, fun houses and roller coasters. The Marstall tent is especially family friendly, with diaper changing stations and plenty of room for strollers. And while we agree, there is nothing quite as adorable as small children wearing miniature dirndl and lederhosen, kids are also impatient about waiting in line and quite irritable when they need to use the restroom — much like drunk adults. But good luck not letting that little one in the felt feathered cap or flower wreath headband cut in front of you. How can you say “nein” to that face? 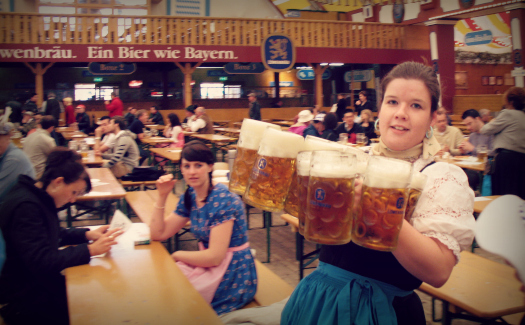 Carrying 10 steins, each filled to the brim, through a crowded beer hall full of significantly inebriated people sounds like something out of “American Ninja Warrior” to us, but the waitstaff at Oktoberfest does it 12 hours a day for 16 days straight. It’s only fair they don’t have to wait for the restroom with the rest of us, but you will certainly see them come and go while you post up in the bathroom line. Raise your stein to the real MVPs of Oktoberfest and stop complaining.

Not going to Oktoberfest this year? Plan ahead for next year’s Bavarian adventure. Prost!

Search for flights to Munich

10 people you see in the airport security line

You know the feeling. You check in online, drop your bag curbside and head toward the security checkpoint at a...
Amanda Festa

The waiting game: A survey of Americans’ airport security experiences

If you’ve been to an airport recently, you’re probably all too familiar with the longer-than-usual wait times. The security line...
Amanda Festa

6 tips for making the most of your time in port

One of the best things about a cruise vacation is the opportunity to see several destinations on one trip without...
Jessica Padykula

CheapflightsQuirky travel10 people you meet in the bathroom line at Oktoberfest