It’s the final days of Movember! That means a lot of hairy-lipped charitable gentlemen reading this are just itching to free their face from all that fur.

After all, you’ve got to shave off your Movember before it becomes a Decembeard, or even worse, a Manuary. Let’s not even talk about Furbruary.

If you’re going to vanquish all that hard-earned growth, at least make it a bit special. Instead of saying goodbye to your moustache in your single-lightbulb bedsit while your neighbors scream-argue through the walls, let us inspire you with a few unexpected shaving suggestions from around the world. 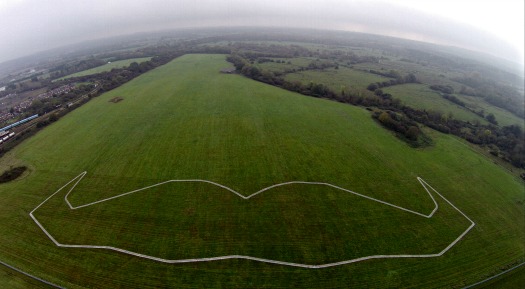 Possibly the most famous country when it comes to barbering, Turkey’s techniques are copied around the globe. First off, the Turkish shave needs to be done with one of those worringly-named cut-throat razors.

If that wasn’t perilous enough, then your face gets flecked with a small flame which catches all those tiny hairs the razor couldn’t quite catch.

Thankfully, there’s a whole-head massage at the end, the barber’s way of saying that despite all those instruments of torture, he really does loves you.

When in Turkey itself, the most famous spot for getting a shave may well be the Grand Bazaar in Istanbul, while elsewhere in the city one local barber will give you the works in exchange for your recycling.

Our recommendation is to head southeast to the middle of Turkey where the glorious views of Cappadocia really cement that fresh-face feeling.

Every morning at the @museumhoteltr, the traditional Turkish #barber gives guests a shave on the terrace. Very cool. pic.twitter.com/O36jA25W9Z

Vietnam has a long tradition of street barbering. Ever since French colonists brought in the fashion of keeping hair short in the late 19th century, the Vietnamese have had a keen coiffuring tradition.

Due to the hot climate, a lot of everyday Vietnamese life happens on the streets – while there are plenty of indoor salons, many people enjoy getting a shave or haircut on the side of the road while the wind breezes past along with a hundred scooters.

My Hanoi Street Barber – Cut my hair, shaved my face and eyelids!, cleared my earwax & nostrils trimmed, all for £1.50 pic.twitter.com/VLV9oSIs

London, a city that’s a sea of beards, offers plenty of options when it comes to barbershops, including a salon by Stuart Phillips, the barber who regular gives haircuts to the Sultan of Brunei.

We’re not advocating spending thousands, but if you’re looking to get rid of your Movember fluff with a little decadence, you might want to saunter down to Trumper’s, where the mahogany everywhere will make you feel all Phileas Fogg and you can even join their shaving school.

Another posh option for your monocled eye is The Refinery, a place that guarantees sophistication will remain wafting around your chin long after you’ve left the premises. 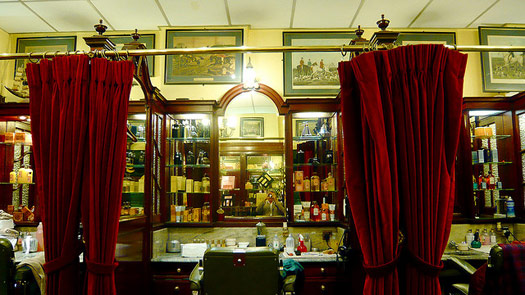 Individual booths at Trumper’s, so you don’t have to mix with the riff raff. Photo: Herry Lawford

Of course, that’s all fine and dandy, but the most famous hair chopper associated with London is Sweeney Todd, the mythical “Demon Barber of Fleet Street” who supposedly had his barbershop / abattoir / pie-ingredient production room next to St. Dunstan’s in the early 19th century.

If you go to Fleet Street for a shave these days, it may not be quite as dangerous, but do expect to pay terrifying prices. 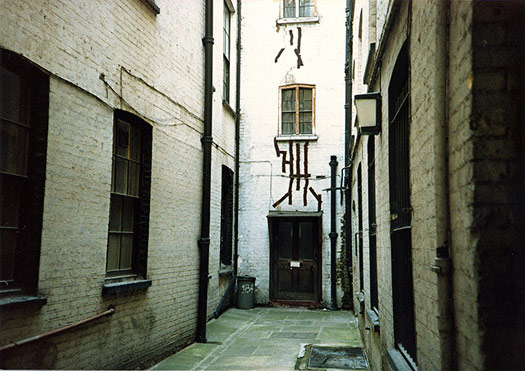 If the Sweeney Todd story is true, all the goriness happened here… “Hen and Chickens Court” off Fleet Street. Photo: Pip R. Lagenta

Getting away from all the decadence and horror of London, up in Merseyside you’ll find Gallaghers, a pub in Birkenhead that’s actually a barbershop.

A couple bought the run-down pub in 2010 as a location to start their barbershop and cunningly combined the two businesses to make it an award-winning community hub. Nobody seems to mind the lines for the barber chair when they can just belly up to the bar while they wait.

@Gallaghers_pub horrible having to wait for a haircut in my barbers 😉 #happydays pic.twitter.com/wTne0I4Nw2 — Graham Hurley (@smidge1975) June 7, 2014

The Psychic Barber exhibition at the Riverside Art Museum ends just shy of the end of Movember, but we simply had to tell you about it.

As the name implies, the show features barbers who use their apparently psychic gifts to sort your head out and then give you a haircut appropriate to their insights.

We’re not entirely sure what that means – perhaps if they say you’ll fall in love with a tall dark stranger, they give you an adorable black beehive on your noggin.

Either way, the cuts are done in the middle of a gallery in front of other visitors, so our psychic reading is that you’re probably a bit of an exhibitionist if you end up in their barber chair.

While you’re getting a shave, half of you are probably going to get a trim too out of sheer laziness. You’re in the barber chair already, so why not? But the short back and sides take a backseat at My Fathers Barber in Christchurch where the barber Matt Brown spends most of his day carving peoples’ likenesses into the people’s locks. His huge cult following has led Matt to tour the United States teaching his skills.

With about 9 million male residents, there are a lot of chins that need trimming in New York City. But life is fast in the city that never sleeps, so there’s a bit of a boom in barbershops that double as hot spots to be seen at. The John Allan’s network of salons offers the full hair works along with pool tables and beers.

If you buy an annual membership, they will even let you keep your own booze in their mini-bar. If you want a full bar with an actual bartender mixing cocktails, head to Martial Vivot and get a shave alongside the celebs that frequent this ultra-sleek barbershop. (These places never get too out of hand though – one barbershop in Florida actually got shut down for also being a strip club.)

The oldest barbershop in Cape Town opened more than 100 years ago and is still run by the same family. In the fast evolving area of Woodstock, you can get a glimpse of the genuinely retro where Alfreda’s Hairdressers will cut your hair and shave you without the use of any electric razors, all in the midst of a decor that harks back to a hundred years ago.

They claim they can do any style, so you can get a new-school ‘do in old-school surroundings. You may even catch a film crew there – the authenticity is popular with movie and TV location managers.

On the completely other side of the spectrum, the Metroman barbershop, just north of Johannesburg, is home to a bitcoin ATM machine – you can even follow it on Twitter. Cryptocurrencies aren’t the first thing most people associate with male grooming, but hey, this is the 21st century and it’s here to confuse us. 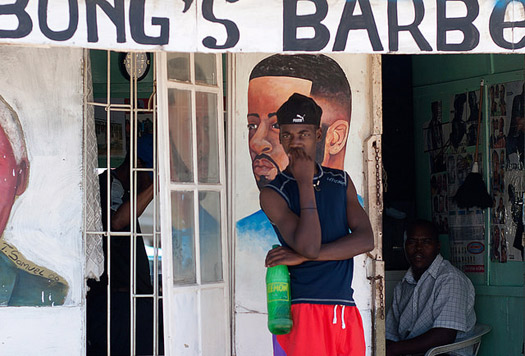 Township barbers can be found all over South Africa, where the cutting of hair and stubble can bring communities together. Photo: David Rosen

As the originator of the Movember movement, Australia is unsurprisingly enthusiastic when it comes to barber culture. There are plenty of swish and retro barbershops cutting hairy faces mustard from Darwin to Melbourne – we especially like the Man Cave Barbershop just south of Sydney, mainly because of the brutally honest name.

So far, only one photo of me has emerged from tonight’s #Movember gala party at the Tivoli in #Brisbane! 😀 #Troggg pic.twitter.com/9GL8SL7ejP — Troggg (Official) (@Troggg_Monster) November 28, 2013

A full-on shaving parade in Brisbane’s South Bank will honor the end of Movember, but this month isn’t the only period in the Australian calendar for hair-associated charitable acts – the World’s Greatest Shave takes place in March every year in support of fighting leukemia. We wonder if it could take off around the world in the same way?

We’re getting into the #movember sprit at the Bar & Bistro! #coffee #Brisbane @MovemberAUS pic.twitter.com/oOyVzhcnok

Some people shave bodily parts other than the face. Pretty much anywhere there’s hair, it’s fair game for the chop. But in the Sichuan province of China, hairy skin takes a backseat to the local service of eyeball scraping.

Taking the same razor used for shaving chins, some specialty barbers will apply it to your eyeball for a few extra yuan. Apparently, that terrifyingly clean feeling is totally worth the years of nightmares and therapy.

Cool waterslides around the world [PHOTOS]

If you’re looking to keep cool while getting your adrenaline pumping this summer, check out these cool waterslides from around...
Marissa Willman

Cheers from elsewhere! Alternative wine spots around the world

Much like culinary travel, choosing a destination for its abundance of vineyards, wineries and noteworthy wine varietals is a popular...
Jess Hopper

Real or fake?: How well do you know the world’s public transportation stops?

So, you think of yourself as a travel buff? That you know various parts of the world inside and out? What...
Nicole Rashotte