Summer is the best season for enjoying a cold drink, whether it’s on the beach, roof deck, your favorite bar – even at home. With endless combinations of spirits, mixers and ingredients, along with regional tastes and specialties, there’s a wide array of options to imbibe with. Whether it’s a version of centuries-old Spanish sangria, a fruity Pimm’s Cup from 19th-century Britain, a pina colada created in 1950s-era Puerto Rico, or a Long Island Iced Tea from the unremarkable 1970s, there are plenty of choices. Try one – or all 10 of our summer cocktail picks from around the world.

The rest of world has begun to recognize Brazil as a major international power in recent years, and its national cocktail, the caipirinha, is similarly taking over the palettes of thirsty people everywhere. Made with the country’s best known spirit, cachaça (rum distilled from sugar cane), raw sugar and lime, the caipirinha combines the potent sweetness of the liquor and sugar with the tropical tartness of lime. Even if you’re not sipping yours while baking on Ipanema Beach, a caipirinha may bring you halfway there. Search and compare cheap flights to Brazil.

A personal favorite of Ernest Hemmingway and most recently associated with the chic Miami scene, the mojito is Cuba’s best known drink. Made from white rum, sugar, mint and lime juice, the mojito evokes the tropical heat, especially when you’re sweating as much as the glass holding your drink. Though perhaps best enjoyed in an elegant old Havana bar watching 1950s American cars rumble by, the mojito’s combination of limey, minty sweetness is perfect on hot summer days – or nights. Search and compare cheap flights to Cuba.

From Mexico and made with its national spirit, tequila, and immortalized by Jimmy Buffett, the margarita is enjoyed around the world. Though flavored variations have worked their way onto menus  – raspberry, blood orange and cayenne pepper to name a few – a real margarita is elegantly simple: a blend of white tequila, orange liqueur and lime juice shaken and served over ice in a salt-rimmed glass. It’s a far cry from the neon-green slushy versions posing as the real thing. The tartness of the lime and orange perfectly match the strength of the tequila. No need to cross the border for your next Mexican fiesta! Search and compare cheap flights to Mexico.

One of the best known Italian summer drinks, the negroni is made from gin, sweet red vermouth and Campari bitters. Invented for, and named after, a count in early-20th-century Florence, the Negroni is a drink whose flavors complement each other as strongly as the stone buildings of this ancient Italian city. Originally intended as an aperitif due to its strength, you may want to enjoy yours on a full stomach. Search and compare cheap flights to Italy.

Invented in its namesake location in the 1970s, the Long Island Iced Tea is an ideal choice to imbibe with during hot summer months when only something stronger than tea will do. Its fresh brewed tea hue may trick you into thinking the drink is alcohol-free, but the potent mixture of tequila, gin, vodka and rum won’t. After a few of these, you may feel like you’re in postwar suburban bliss on “Lon-Guy-Land.” Search and compare cheap flights to New York City.

Considered the best known cocktail from South America, the Pisco Sour was invented in Peru by an American bartender during the early part of the 20th century. Powerful due to the pisco, a form of brandy distilled from grapes, the elixir owes its sour pucker to the other ingredients: lime juice, simple syrup and egg whites. Though not as well-known as its whiskey cousin, the Pisco Sour is worth trying. You may even feel as light-headed as if you were in the high altitudes of Peru. Search and compare cheap flights to Peru.

It’s hard to think of a drink more tropical than the pina colada. Made with rum, cream of coconut and pineapple juice, it was invented in Puerto Rico in 1954 and has since been proclaimed the island’s official drink. The richness of the cream of coconut mixes with the sweet acidity of the pineapple juice to give a frothy cooling kiss to your palette – and there’s a nice kick from the rum. Even without a little umbrella in the glass, you may feel as if you’re on an island under palm trees when sipping one. Search and compare cheap flights to Puerto Rico.

Nothing says summer more than a glass – or pitcher – of this delicious fruit-infused wine punch, originally from Spain. It’s typically made with red wine, brandy and fresh peaches, melons, citrus or berries, which add tanginess. The varying combinations of spices – like nutmeg or cumin – offer hints of mystical spiciness evocative of Andalusia. Sangria can be the perfect accompaniment to a light summer meal or a few tapas, and is perfectly enjoyable on its own (of course!). Search and compare cheap flights to Spain.

A proper English Pimm’s Cup is made with Pimm’s No. 1 – a brand of gin infused with citrus, spices and herbs – mixed with lemonade, soda water, cucumber and sometimes fresh fruit. Best known as the traditional drink of Wimbledon, in recent years it’s been enjoyed year-round – and worldwide. The slightly medicinal taste of the gin is tempered by the tartness of the lemonade and the sweetness of the (optional) fruit. Even if you’re not enjoying yours at a tennis match, chances are that you’ll “love” the taste. Search and compare cheap flights to England.

Famously sipped by Hunter S. Thompson in Fear and Loathing in Las Vegas, the Singapore Sling was invented at its namesake’s famous Raffles Hotel in the years before the First World War. The rose colored concoction consists of gin, Heering’s cherry liqueur, Benedictine, grenadine, lime juice and pineapple juice – the last of which creates the signature foamy pink head. It has a fruity, cherry-hinted tartness. While sipping one at the Raffles on a steamy Southeast Asian night may be the most authentic way to enjoy a Singapore Sling, you can certainly enjoy one closer to home. Search and compare cheap flights to Singapore. 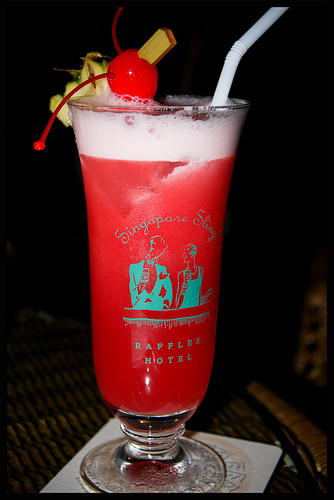 Top 10 summer cocktails from around the world was last modified: June 26th, 2019 by Martin Clinton

Drink me, I’m Irish: What to sip in honor of St. Patrick’s Day