In North America, those distant English-speaking nations of Australia and New Zealand always seem like some cool cousins you hear about but never get to meet because they live so far away. They’re also often lumped together, with little New Zealand being overshadowed by the big Aussie personality. So when I finally got to New Zealand, there were a few things that surprised me as a traveler.

So before you start searching for your flights to New Zealand (and Cheapflights.com is a good place for that), here are a few things I wish I knew before heading down under, and advice I would offer to travelers about to do the same.

There are three kinds of Kiwis

Kiwi: The common nickname for people from New Zealand.
Kiwi bird: The flightless, nocturnal bird native only to New Zealand. These cute little guys are tough to run into in the wild but easy to meet at a zoo.
Kiwifruit: The sweet little round fruit, green on the inside and brown and furry on the outside. When you hear people say Kiwi, they’re usually talking about the people or the bird. If you’re looking for the fruit, you’ll need to ask for Kiwifruit.

That whole “hole in the ozone” thing is real

You may know what it feels like to be sunburnt, but you’ve never really felt sun until you’ve felt Southern Hemisphere sun. You’ll be aware of it almost immediately, and it feels like a small little prickling sensation, even on a mild day. You may have heard there’s a hole in the ozone layer over Australia and New Zealand, and when you’re there, you will actually feel it. For this reason, make friends with sunscreen. Apply a minimum of SPF 30 on a daily basis to any exposed skin, even if you’re not heading to the beach. Sunscreen is so necessary, in fact, that most restaurants with outdoor seating will have sunscreen available for customers to use, and parks will often have a free sunscreen dispenser.

Those Kiwis love their All Blacks

If America has baseball and Canada has hockey, New Zealand has rugby, but more specifically, it has the All Blacks. The All Blacks, so-called for their all-black uniforms, are the national rugby team of New Zealand, bringing international recognition to a sometimes overlooked country. They won the last two Rugby World Cups in 2015 and 2011, and they are a major source of Kiwi pride. Known as the best team in the game, the All Blacks are also known for performing the Haka, the traditional war dance of New Zealand’s native Maori people, before games. Never heard of the Haka or the Maori people? That brings me to my next point…

Exposure to new cultures and traditions is one sure sign of a rewarding travel experience, and in New Zealand, the Maori culture is extremely important. You’ll notice its influence all around you.

The Maori are the indigenous people of New Zealand who arrived to the island nation in canoes over 700 years ago, and who trace their roots back to the same Polynesian people that populate much of the South Pacific. Today, the Maori make up nearly 15 percent of the national population, and their culture is ubiquitous in the national Kiwi culture, from the country nickname Aotearoa, meaning “land of the long white clouds,” to the common greeting kia ora, meaning “welcome,” to town and city names like Rotorua (where you can visit the Tamaki Maori Village), to the Maori symbols and designs seen on tattoos and carved bone or jade necklaces.

The idea of hitchhiking as a cheap, social and affordable means of getting around may seem like a bygone and dangerous practice, but the tradition is alive and well in New Zealand. It’s fairly common to see people standing along the sides of the road or at bus stops with their thumbs out. Kiwis are known as some of the nicest people around, and New Zealand is known as one of the safest countries to live and travel in, so it makes sense that this tradition is still popular.

Make time for both the North and South Islands

Among Kiwis, there’s a bit of a North Island versus South Island rivalry, similar to the U.S. East Coast versus West Coast debate. North Islanders are proud of their warmer weather, their beaches, and the more metropolitan lifestyle (I use that term loosely) available in the more populous cities of Auckland and Wellington. South Islanders are proud of their majestic scenery, their ski and snowboard culture and the availability of adrenaline-junkie activities (think bungee jumping and glacier climbing).

There is a common misconception that, with it’s incredible natural beauty and larger size, the South Island offers more to see and do than the North Island, and some travelers might be inclined to skip the North Island altogether. Don’t do that. Take the time to explore both islands, all the way from Cape Reinga in the way, way north to Invercargill in the way, way south. As a traveler, you get to experience the best of both islands and decide for yourself who wins. (Hint: It’s a tie. They’re both amazing.)

If you’re short on time, hop on a bus

If you’re traveling solo in New Zealand and you only have a few weeks, the best way to meet people and see the country is by bus tour. Bus companies like Stray New Zealand and Kiwi Experience offer travelers hop-on, hop-off style traveling along the busiest backpacker routes, hitting major stops like Auckland, Wellington, Nelson, Christchurch, Queenstown, Milford Sound and plenty more.

Riders can choose how many destinations they’d like to see and how long they’d like to travel for, and leave the nitty-gritty details like finding accommodation (usually hostels) and other add-on activities to the bus company. These buses aren’t exactly all-inclusive and can be a pricier option, but they’re a great way to meet and make friends with people traveling in the same style as you. It’s also a great way to guarantee accommodation, because if you’re traveling to some of the more popular towns in the height of the busy summer season (December through February), accommodation can book up quickly.

Be sure to rent a campervan

The country is fairly small – smaller than California – and it has an astoundingly diverse geography that is best appreciated from the road. Queenstown and Wanaka are lush and mountainous, the Marlborough wine region is flat and dry, the western Coast has wild, long beaches and rocky cliffs, central parts of the North Island are actively geothermal, while the northernmost parts of New Zealand offer gorgeous beaches and island hopping.

There’s so much to see, and the best way to see it is to round up a couple of friends and find yourself a campervan. You can drive by day, taking in the beauty of the countryside, and spend your nights staying in campsites alongside your fellow van-dwelling travelers. Because of the popularity of this travel style, there are plenty of companies – like Jucy Van, known for their bright green and purple colors, and Escape Rentals, known for their elaborately painted vans – to help you hit the road.

Be ready for working travelers

While traveling in Europe can mean coming across many student travelers, and traveling in Asia can mean hanging out in hostels with the backpacking crowd, traveling in New Zealand means sharing flights, buses and accommodations with working travelers. These are an international bunch – people from England, Australia, Germany, France, Argentina, Chile, Canada, the U.S. and more – who are often in New Zealand for a year or longer on working holiday visas.

They tend to stay in one place for at least a season – whether it be working the ski rentals in Queenstown, picking grapes in Marlborough or waiting tables on Waiheke Island – and they often live at the same hostels as the travelers passing through for the weekend.

If you’re traveling through New Zealand, working travelers can be a great source of insider information for getting to know a town, and if you have the time to stay longer than just a few days before heading off to your next destination, you can find yourself in a welcoming community of like-minded travelers.

This is the land of good coffee 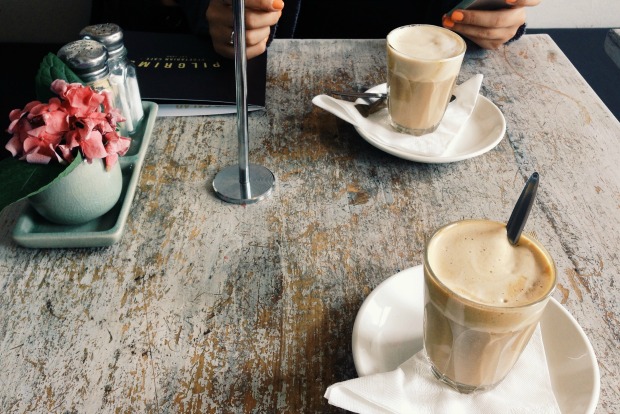 I’m a New England girl, so I grew up on iced coffee. I’ve visited Italy, Turkey and Costa Rica, all of which have very distinct and respected coffee cultures, none of which managed to shake my ice-cold, filter-coffee-loving roots. And then New Zealand happened.

New Zealand, like Australia, takes barista coffee very seriously, and it was while traveling around New Zealand, and while working as a waitress there, that I too finally grew into espresso snobbery. Say goodbye to weak, bitter and flavorless coffee, and find peace (and a strong caffeine buzz) with a good Kiwi-style latte. Or, better yet, an espresso martini.

Break out the thesaurus before heading to the grocery store

A quick reference for some new vocabulary that might come in handy while strolling the aisles in Countdown (one of the more popular supermarket chains):

Everyone can be a wine snob

Coffee isn’t the only thing travelers can learn to appreciate while crisscrossing New Zealand. Inevitably, you will find yourself vineyard hopping and cheeseboard sharing in one of New Zealand’s many wine regions. Whether you’re getting wild on Waiheke Island’s classic reds, sampling the vintages of Hawke’s Bay or biking between vineyards in the famous Marlborough region – known internationally for it’s high-quality Sauvignon Blancs – good wine is all around you in New Zealand.

It’s so abundant that, despite knowing nothing about wine, you’ll still leave the country with a more mature wine palate. You’ll find yourself saying things like “that’s a lovely, buttery chardonnay” or “I’m in the mood for a big-bodied red blend.”

The biggest surprise? New Zealand rosé. Often known in North America as the sugary pink drink of choice for people who don’t really like wine, rosés in New Zealand offer a spicy, dry and flavorful alternative that will change your perception of rosés and leave you craving a glass of the refreshing pink stuff while sitting out in the sun on a warm summer day.

A few quick notes for translating Kiwi wine terms: If you’re looking for Pinot Grigio, around these parts it’s known as Pinot Gris, if you’re offered a glass of Sav, you’re getting Sauvignon Blanc and if you’re pronouncing Syrah “shiraz,” which is how it’s commonly pronounced in Australia, expect a heated debate over the correct way to say it.

This is a weird one, I admit, but it’s something I’ve missed quite a bit since leaving New Zealand. Hummus is affordable and plentiful in New Zealand, like in many other countries, but what’s different about the hummus section in New Zealand grocery stores is the variety of flavors. I’m talking roasted kumara (sweet potato) and butternut hummus; beetroot and roasted garlic hummus; roasted carrot and honey hummus; kumara, coconut and turmeric hummus; jalapeno and lime hummus; caramelized onions with lemon and rosemary hummus, just to name a few. All these in addition to the garlic and lemon hummus and the roasted red pepper hummus we’re used to seeing in the U.S. No New Zealand backyard barbecue is complete without at least four different kinds of hummus (and an equal variety of rice crackers).

So now that you’re prepared to book a trip to New Zealand, head to Cheapflights.com to start your flight search.

Search for flights to New Zealand