Valentine’s Day is often synonymous with spoiling your sweetheart with heart-shaped boxes of chocolates, red roses and greeting cards. And while most plan to buy candy for the holiday, the average person will spend $142.31 on gifts according to the National Retail Federation.

Why not treat your sweetheart to something a little different? From cheap trips to spa days to cooking classes and more, there are many ways for cupids from coast-to-coast to woo their sweethearts without draining their wallets.

Pampering, Pac-Man and a Pilsner

An old-fashioned shave followed by endless hours of video game playing that won’t cost more than a couple of rolls of quarters is sure to be a hit. 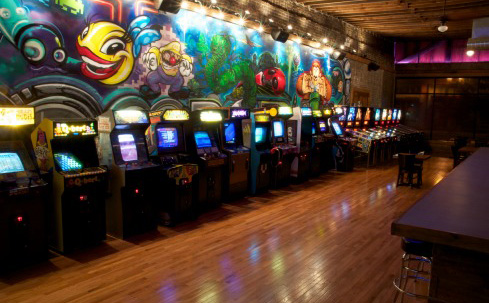 Chicago: Take your valentine to the vintage State Street Barbers for a Hot Lather Shave, which includes a cup of complimentary coffee or tea for $45. Consider adding a haircut, which includes a shampoo, scalp massage, straight edge razor neck shave and a shoulder massage for $30-$32. Once your manscaping mission is complete, head to Emporium Arcade Bar. There are two locations in the Windy City; both have more than 100 classic video games along with pinball, pool, air hockey and Foosball. These bar arcades are the ideal spot to sample craft beer from Midwestern breweries like Revolution Brewing, Half Acre Beer Company, Solemn Oath Brewery and 3 Floyds Brewing Co.

New York City: The Big Apple is home to The Art of Shaving, a chain of shave shops that opened in 1996 and has been credited with renewing the trend of high-end male grooming. The masculine Madison Avenue store and barber spa offers vintage shaves and haircuts performed by expert master barbers. The 30-minute Traditional Shave includes prepping with a hot towel and pre-shave oil followed by dollops of hot shaving cream, an expertly executed shave with a straight razor and concludes with a soothing lavender-infused cold towel and hydrating after shave balm ($35). Next, head to Barcade on West 24th Street in nearby Chelsea. Opened by four friends, Barcade has five locations. The Chelsea location has 52 classic games like Donkey Kong, Ms. Pac-Man and X-Men and old-school prices: each game costs a quarter to play, which leaves plenty of spare change to sample the 25 American craft beers on tap.

San Francisco: Fellow Barber in San Francisco’s hip Mission District is a throwback to old-school barber shops where men gathered for a shave, haircut and conversation. No appointments are needed making this a great last minute surprise for your sweetheart. The Straight Razor Shave includes hot and cold towels, copious hot shave cream and a close shave ($50). There’s even a $25 Hangover Treatment, a traditional barber facial, in case your sweetheart has too many brews at Brewcade, which has 27 arcade games like Frogger, Galaga, Mortal Kombat and Q*bert, 25 craft beers, cocktails, wine and even a soda pop menu on offer.

Spoil your sweetheart on V-Day with a spa day. While any day is ideal for a spa day, there are sweet deals at many spas this time of year. What’s better than a spa day? At home spa treatments performed by your valentine! 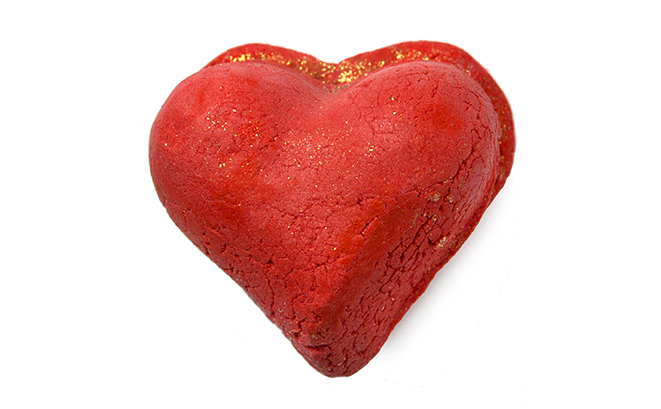 Bliss spa: The luxury spa, known for its creatively named spa services and products packaged in iconic icy blue hues, has 21 spas worldwide. In time for Valentine’s Day, bliss spa has recently launched a bliss spa membership. For $99 a month, spa-goers get either one fabulous facial or one blissage60 massage per month, 10 percent off additional spa services and a 20 percent discount on spa products. To save money, bring the spa home. Check out Bliss’s promotion page for deals on scrubs and lotions for at-home pedicures and massages.

LUSH: Indulge your valentine with a soothing soak. Draw the bath with whimsical heart-shaped bath ‘bombs’ like the floral-scented Heart Throb ‘bubbleroon’ with shea butter, ylang ylang and geranium essential oils which turns the water a romantic red hue. Lather up with Cupid’s Love, a red, heart-shaped soap that reveals little white hearts when you lather up. With more than 700 locations worldwide you’ll be sure to find something to stir up some romance.

This year, Valentine’s Day falls on the Saturday before Presidents Day, giving many folks a three-day weekend. Why not spoil your sweetheart with a romantic rendezvous. 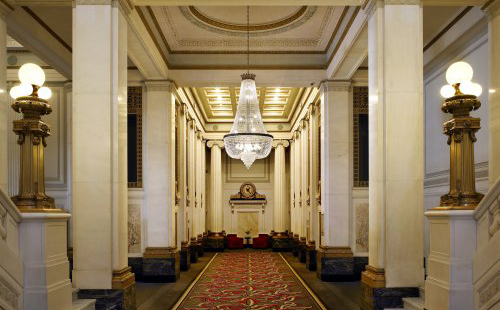 ‘Take It Off for Love’ at Hotel Monaco Baltimore (Image: David Phelps/Kimpton Hotels)

Hershey, Pennsylvania: What could be sweeter than a sweet escape to Hershey, Pa., “the sweetest place on Earth” to learn about the life of Milton Hershey and how chocolate is made? The Hotel Hershey and the Hershey Lodge host a variety of chocolate themed events as part of Chocolate Covered February, from a Chocolate Tea with tea, finger sandwiches and chocolate desserts to Truffles for Couples, a truffle rolling session at The Hershey Story to a free Olio Chocolate Balsamic Tasting of chocolate-infused balsamic vinegar’s.

Washington, D.C.: A dozen Kimpton Hotels in Washington, D.C., Maryland and Virginia want to “take it off for love” – the hotel rate that is! Guests who stay one night get 10 percent off, two nights get 15 percent off, and three nights get 20 percent off on weekend stays. Spoil your sweetheart even more by upgrading with Champagne and chocolates for $10 more.

Indecisive about what to gift your sweetie? Why not send them on a sweet coast-to-coast shopping spree that won’t break the bank. 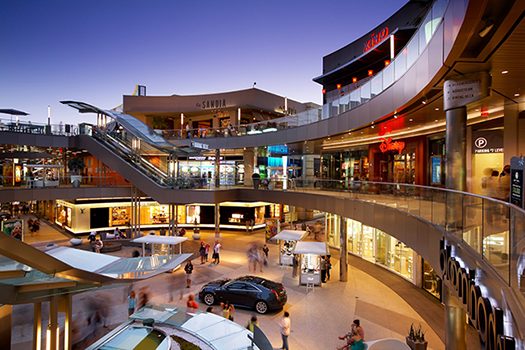 New York City: While the designer shops on Fifth Avenue are impressive, head to more budget-conscious SoHo. The blocks South of Houston Street are populated with artists’ lofts, shops and restaurants. Hit the sales at shops and don’t miss designer discount clothing store Century 21 in downtown Manhattan at 22 Cortland Street.

Who needs reservations at a Michelin-starred restaurant when you can work as a team to create culinary masterpieces worthy of Top Chef at culinary classes for couples? 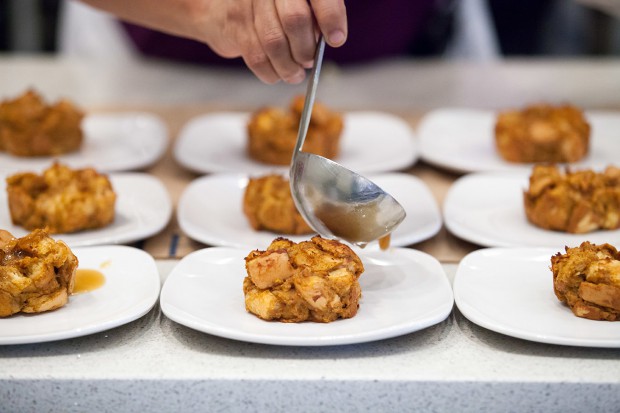 Le Pain Quotidian: The global chain of French-style cafes routinely offers baking classes at many of its U.S. locations, including the popular Artisanal Pizza Making class at Walnut Street Bakery in Philadelphia. The 90-minute class includes hands-on introduction to pizza dough making, crafting the perfect pizza, and enjoying the finished product with a glass of wine or juice.

Williams-Sonoma: The chain of cookware and gourmet food stores offers a range of cooking classes each month, including free Technique Classes. From baking to stir-frying to cooking with cast iron, these hour-long classes include tastings and a 10 percent discount of same-day purchases.

What could be finer than a day spent strolling a sports hall of fame and knocking back a few cold ones? These easy to plan day trips from Cleveland and New York City are the perfect way to spoil sports fans and beer aficionados. 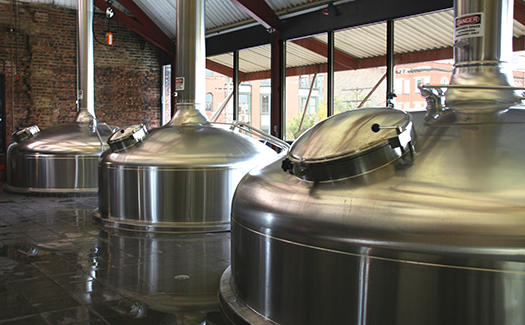 Football Fans: Located one hour from Cleveland is the Pro Football Hall of Fame in Canton, Ohio, the ultimate museum for NFL fans. Packed with ever-changing exhibits featuring memorabilia, like the football Denver Broncos quarterback Peyton Manning threw for his record-breaking 509th touchdown in 2014, and information about nearly ever aspect of the game and its hall of famers. Score an award for “best valentine ever” with a stop at Great Lakes Brewing Company. The brewpub restaurant serves 100 seasonally rotating “pub exclusive” beers that pair well with its locally sourced food, some of which is sourced from the brewery’s two farms. After touring the brewery, order a sampler of the taproom’s finest seasonally offerings (free tours are offered 5 p.m. to 8 p.m. on Fridays and 1 p.m. to 8 p.m. on Saturdays).

Baseball Fans: Score a home run by visiting the National Baseball Hall of Fame in Cooperstown, N.Y. The museum’s three floors of exhibits tell the story of America’s pastime, its hall of famers, and baseball’s milestones. Nearby, the Brewery Ommegang keeps the town’s tradition of hops production alive. The brewery offers free tours and $5 tastings of its seven Belgian-style beers and seasonal offerings every afternoon year-round.

Cuddling is what you’re guaranteed after a day of ice skating and sipping hot chocolate. 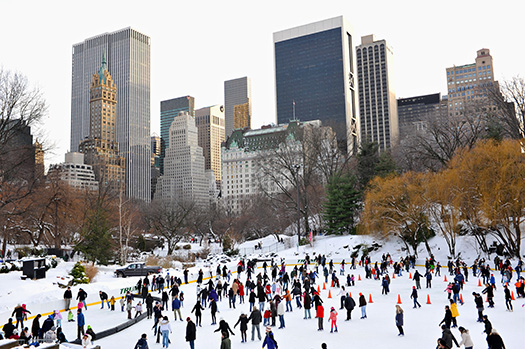 Boston: The Frog Pond on the Boston Common is a perfect spot for sliding and perfecting figure eights. Illuminated at night with lights, the rink provides views of some of Beantown’s most famous landmarks like Beacon Hill and the State House (Admission: $5. Skate Rental: $10). Post-skate, share a cup of creamy French hot chocolate at Thinking Cup.

New York City: Central Park is the quintessential Big Apple experience. You won’t be skating on thin ice when you treat your valentine to skating at Trump Rink (Admission: $11.25/Monday-Thursday; $18/Friday-Saturday and holidays. Skate Rental: $8). Afterwards, warm up with some of the city’s best hot chocolate at Jacques Torres, a short walk from the park. The shop, located on Amsterdam Avenue between 73rd and 74th Streets, is a chocolate-lover’s dream. The chain, run by Jacques Torres (aka Mr. Chocolate) features every conceivable item enrobed in chocolate from nuts to Cheerios, all which pair perfectly with the rich, thick hot chocolate.

Washington, D.C.: Hit the ice at the picturesque Ice Rink at the National Gallery of Art, which features a prime view of the museum’s sculpture garden (Admission for two-hour skate session: $8. Skate Rental: $3). Show off your artistry on ice before cozying up to a piping hot cup of hot cocoa or the spiked Peppermint Patty from the museum’s Pavilion Cafe.

CheapflightsCheap & freeWhere to spoil your sweetheart (without breaking the bank)