Planes are marvels of human invention – they’ve made our world smaller and more accessible – but have you ever thought about what happens to an aircraft when the airline doesn’t want it anymore? The lucky ones get snapped up by other carriers. Many, literally, get put out to pasture and retire to an aircraft graveyard where they spend their time idling in the desert heat. The future of most disused airliners is quite dreary. Come the end of their flying careers, they get taken apart, chopped up and sold off as scraps. Thanks to the creative efforts of a growing number of people though, some retired planes are being snapped up and recycled in a surprising variety of ways.

Once one of the most unusual restaurants in the world, this iconic Douglas C-47B Skytrain hangs over the highway in Mangaweka, New Zealand, and has had many faces over the years. It started its post-flight life as a tea room back in 1986 and was covered in painted cookies in early 2000, long holding the name of “The Cookie Time DC-3 Café.” Recently, the Mangaweka Adventure Company decided to give the old timer back some of its dignity. Visitors can explore the old plane, but there’s no more eating and drinking in the DC-3. That can now be done in The Hub Café, underneath the fuselage. 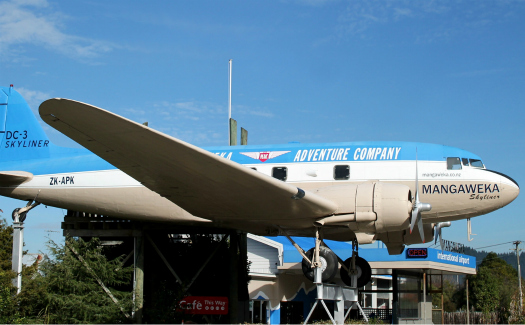 What sets Teuge Airport in the Netherlands apart is the sight of a refurbished 131-foot Ilyushin 18 plane, which has become a popular luxury honeymoon destination. Built in 1960, the East German government plane became a restaurant after German unification until Hotelsuites.nl bought it in 2007. Visitors have the complete craft at their disposal – including a Jacuzzi, an infrared sauna, three flat-screen TVs, a pantry and free wireless internet. 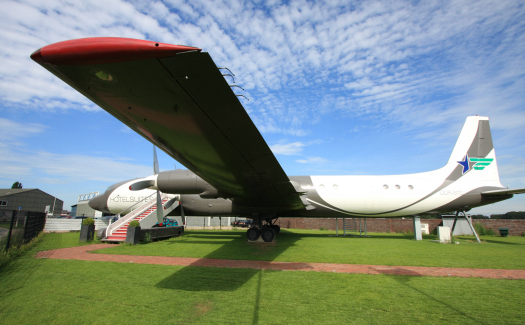 Limo Bob is an American legend. He not only holds the Guinness Book of World Records title for the longest limo ever built (100 feet), he also decided to cut the wings off a Boeing 727 and turn it into a Jet Limo. If you’re looking for a grand (and eye catching) way to get around Los Angeles, you can rent this 50-seater for $100,000 a month. And, if you must own this, Limo Bob will sell it – for $1 million. 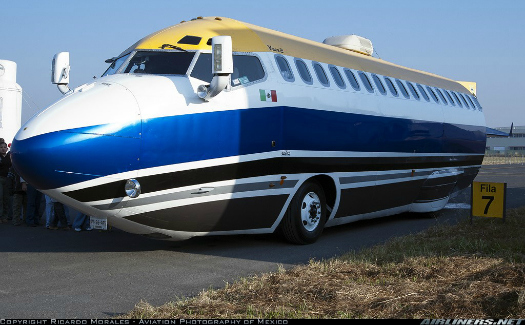 In 2006, hotelier Oscar Diös bought a decommissioned Boeing 747-200 and turned it into a beautiful 29-room hostel, located at Sweden’s Arlanda Airport. The recycled Jumbo Jet has found its new calling – providing rest for weary travelers. Choose to spend the night in luxury in the exclusive cockpit suite or stay in one of the other rooms or dormitories. The beautiful Arlanda Hostel will give you a mile-high feeling right on the ground. 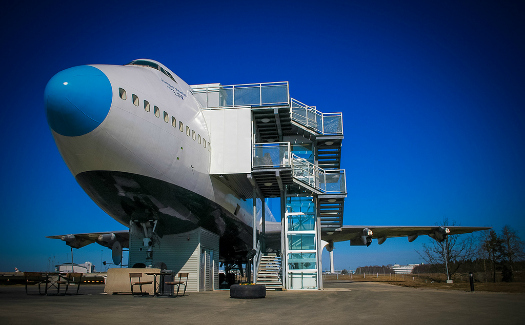 Built in 1944 and flown during WWII, this DC-3 was saved from the wrecking ball in 1976 and converted into a road-worthy vehicle. The Space Shuttle Café has operated as a commercial kitchen since 2005 and even featured on the PBS show “California’s Gold.” It is currently for sale, so if you’ve ever dreamed of owning an unusual snack bar or restaurant, this could help your dream take off! 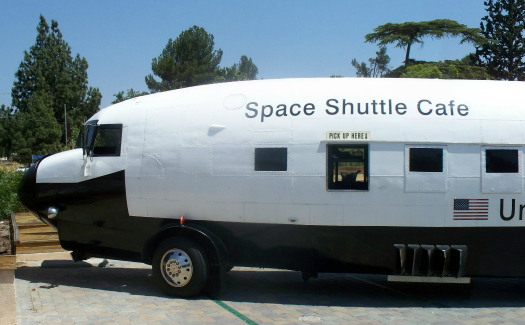 Francie Rehwald of Malibu, California, wanted a home with lots of curves, so architect David Hertz suggested that a Boeing 747 would be the ideal source of building materials. Compared to new airliners, which can set you back a cool $2 million, Rehwald’s old 747 was a steal at just $40,000. The process of dismantling the plane, transporting the parts to Malibu and reconstructing a home with them wasn’t cheap though. Also, the roof of the house had to be registered with the FAA, so pilots flying overhead don’t mistake it for an in-service aircraft. Apart from the wing roof, some of the other features include an art studio constructed from the Boeing’s upper fuselage and cockpit-window skylights. 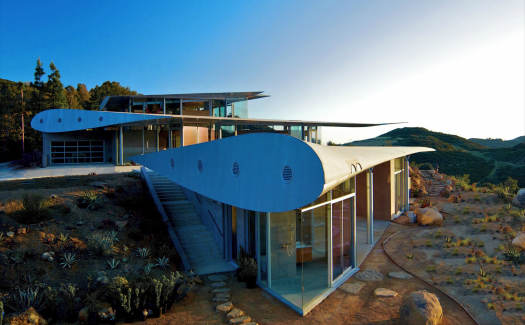 What used to be Howard Hughes’ “flying office” can today be seen floating on the waterways of Fort Lauderdale in Florida. The old Boeing 307 Stratoliner was deemed un-flyable in 1969 but rescued from the landfill and converted into an exotic houseboat named the Cosmic Muffin. The Cosmic Muffin has been featured everywhere from CNN to “Ripley’s Believe It or Not!,” and owner Dave Drimmer operates the plane-boat as a historical attraction that is available for charter. 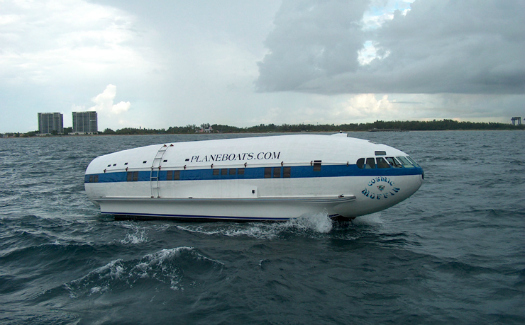 Instead of being recycled for scrap, this classic 1958 Douglas DC-6 was lovingly restored and turned into a one-of-a-kind dining destination that was even featured in James Bond’s “Casino Royale.” Launched in 2010, DC-6 Diner seats up to 40 guests and overlooks the runway at Coventry Airport. 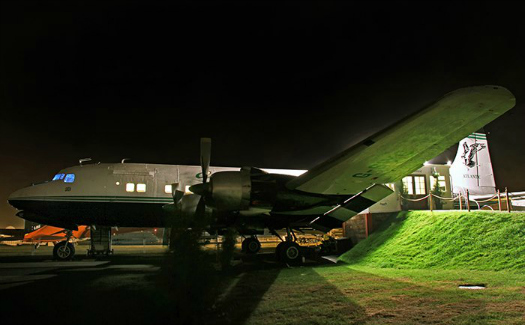 Situated on the edge of the Manuel Antonio National Park in Costa Rica, the Costa Verde Resort converted a 1965 Boeing 727 into a luxury hotel suite. Rescued from its resting place at San Jose airport, the vintage fuselage now sticks out from the lush jungle canopy, affording its lucky residents scenic views that make you feel like you’re flying. The same resort has also converted a C-123 Fairchild into a pub. Diners at El Avión get their food delivered from the kitchen on the old fuselage dumbwaiter. 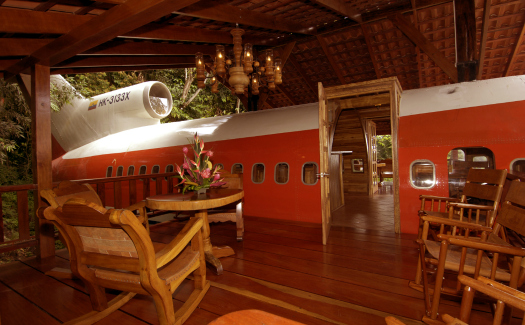 Kindergarten in a plane, Rustavi, Georgia

In the Georgian city of Rustavi, teacher Gari Chapidze bought a retired Yakovlev Yak-42 airplane and transformed it into a kindergarten classroom. The interior was refurbished with educational equipment, games and toys, but the cockpit was left intact so the children can play around with the 1,500 buttons and knobs and pretend to be pilots. There’s also a winged classroom in Stoke-on-Trent, where the pupils at Kingsland Primary School check in for class in a refurbished Short S-360. 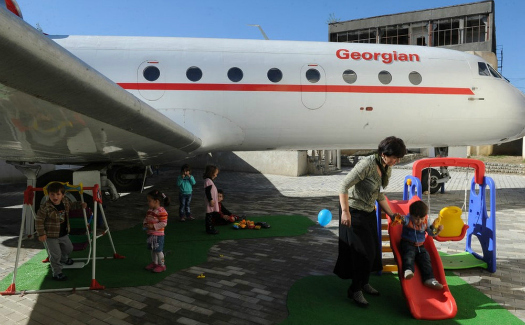 An airplane turned into a kindergarten (Image: http://avaxnews.net/pictures/44541)

This planned structure may not be a reality yet, but we feel it deserves a special mention. Instead of just one retired plane, the fuselage sections of more than 200 old Boeing 727 and 737 jets are being recycled here. The New Jalisco Library in Guadalajara, Mexico, is a project designed by New York architects LOT-EK, who are known for creating beautiful homes and offices from old shipping containers. We hope to see this daring structure being built soon. Watch this space! 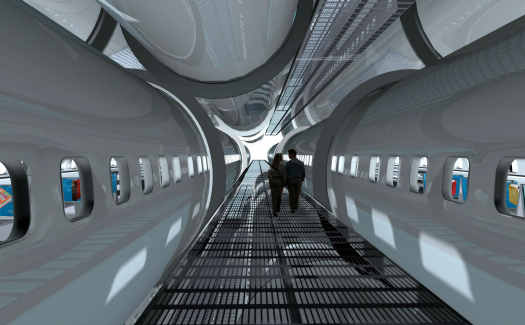