Travel ranks pretty highly in the President’s job description. Whether it’s flying to the farthest corners of the globe (and everywhere in between) in the name of international diplomacy, heading down the Mall to address Congress, or hopping cross-country to meet elementary school kids, much of the President’s life and work is away from the White House.

Needless to say, the leader of the free world doesn’t roll like the Average Joe. A cavalcade of specialist vehicles are always on standby, primed and ready to whisk him (or her!) quickly and securely from A to B.

Paint job aside, you could easily think Air Force One was just like any airline-operated 747. Beneath the skin however, it’s a wholly different animal.

For starters, it’s equipped for midair refueling, meaning it could fly for an all-but-unlimited length of time. Then there’s the hardened electronics, which have a higher than average resistance to an electromagnetic pulse (one of those gets emitted when a nuclear bomb explodes).

Inside the cabin it’s VVIP class all the way. As well as quarters for those accompanying, the President has an extensive suite featuring a large office, bathroom and conference room.

And it doesn’t end there. Each plane’s got not one, but two food preparation galleys capable of feeding 100 people at a time. There’s even an operating room staffed round the clock with one of the physicians to the President’s team. 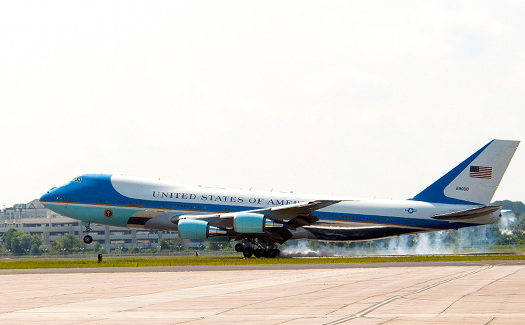 Marine One – United States Marine Corps Sikorsky Sea Kings and ‘White’ Hawks helicopters
Needless to say, the Commander in Chief has more than two 747s at his disposal. The President flies by helicopter whenever a motorcade is deemed too costly or logistically challenging. Often, Marine One is the preferred option for rendezvousing with Air Force One.

As a point of security, Marine One always flies in a constantly shifting formation composed of up to five identical helicopters – the others being decoys in the event of an attack.

The HMX-1 ‘Nighthawks’ Squadron fly variants of Sikorsky’s Black Hawk (made famous by the Black Hawk Down book and movie) and Sea King models (the kind the Coast Guard uses). 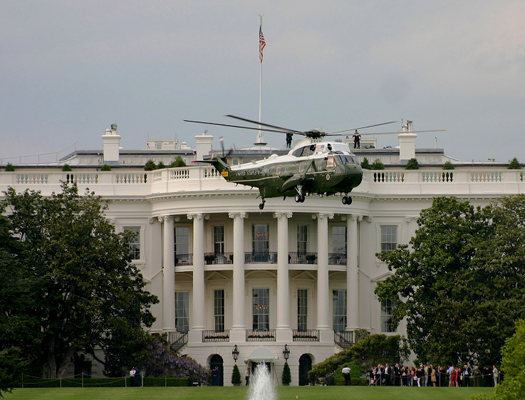 Cadillac One – Cadillac Presidential Limousine
Being on the ground, as opposed to in the air, is considered the riskiest way for The President to travel. The presidential limousine – nicknamed The Beast – is therefore reinforced with armor plating and equipped with defense countermeasures.

But that’s not all. The tires are designed to run when flat, the cabin’s fully sealed making it resistant to biochemical attack, and the trunks’ stuffed with a blood bank stocked with the President’s blood type. 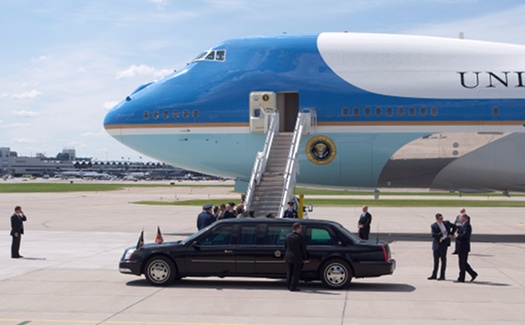