Chinese New Year falls on Thursday, Feb. 19, and this will be the Year of the Goat.

The Goat is the eighth sign of the 12-year cycle of animals that appear in the Chinese zodiac. Associated with the eighth Earthly Branch symbol, those born in the Year of the Goat are considered to be intelligent, creative, dependable and calm.

Goats are a much-loved animal. They’re tough, able to survive on the slimmest of pickings and so sure-footed that they can scale the highest mountains and the steepest walls.

Not only are they great at eating up old Christmas trees, they’re “green” lawnmowers, clearing gardens of stubborn plants for Hollywood A-Listers.

We throw the goat at concerts, applaud this exclusive bunch at West Point Military Academy, used to throw the goat at an ancient Spanish festival and, every August in a small Irish town, crown a wild mountain goat and allow him to reign over a town for three days. 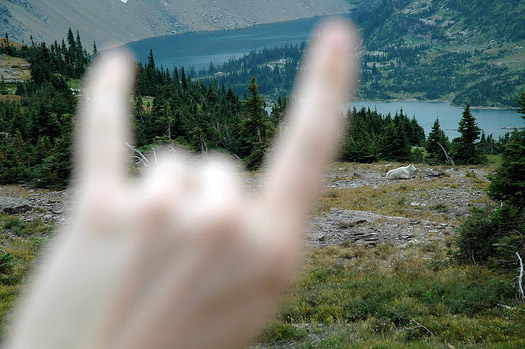 Throwing the goat to a goat. Photo: Forrest Norvell

As if those aren’t enough honors, we’ve gone one step further and herded up our 10 favorite goat-tastic places around the world. 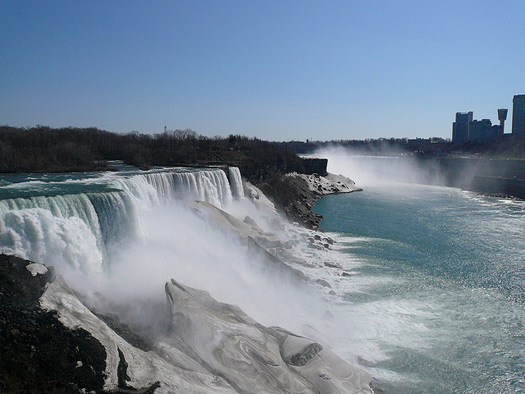 Niagara Falls and the Cave of the Winds. Photo: Jeff Stevens

It gets its name from a herd of goats owned by John Stedman, an early pioneer. In 1778, he moved them to the island to protect them from wolves. Sadly, the harsh winter of 1778 was a mightier predator and all but one of the animals perished.

You don’t need a boat to get to this island; two bridges connect Goat Island to the mainland.

Goat Island offers visitors the most spectacular views of the Falls. There’s a trolley that trundles around the island and a walking trail that encircles it. The Cave of the Winds is located here, too. An elevator takes sightseers down to the base of the American Falls. From redwood decks and platforms (removed each autumn and replaced each spring), visitors can walk right up to the base of the Bridal Veil Falls. 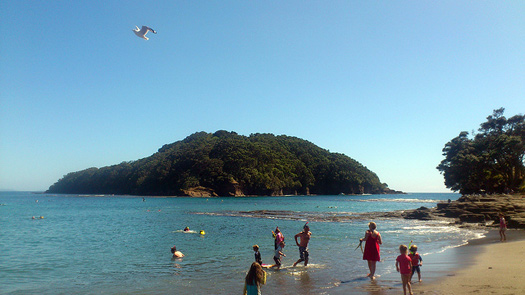 You’re much more likely to see colorful fish than goats during a visit to Goat Island. The marine reserve is located north of Auckland. It’s New Zealand‘s first and most accessible marine reserve, established in 1977.

It’s named after the goats that were released by early European seafarers; the animals provided food for sailors who became marooned. It’s a place of significance to the Maori who know the island as Motu Hawere.

Goat Island is a popular spot for swimmers and divers and is a fantastic family destination. There are plenty of opportunities to go rock-pooling and snorkeling. 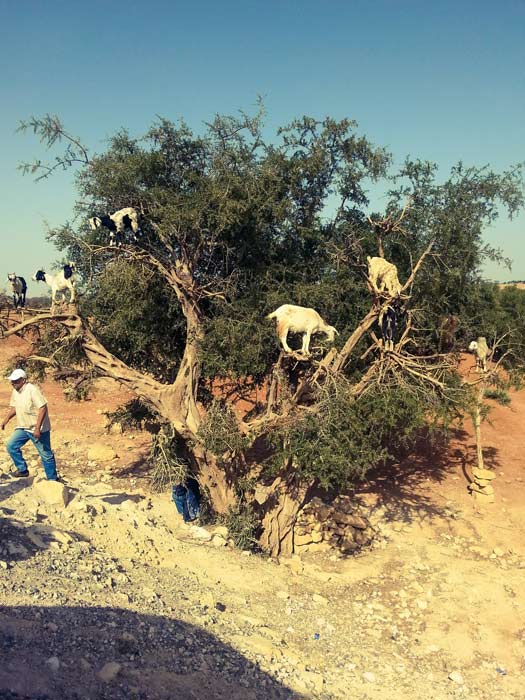 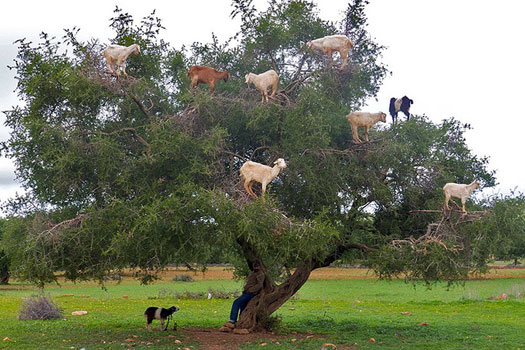 If you’re in this part of Morocco, look up! Chances are there’ll be Tamri goats in the tough, gnarled branches above, nibbling on the fruit of the Argania spinosa.

The argan fruit is an almond-shaped nut. A thick peel insulates it. Traditionally, the tree-climbing goats would eat the fruit, excrete it and then members of the Berber tribe would gather up the nuts, crack them open with stones and roast and grind the seeds.

Today, argan oil is in high demand, a cult beauty product in the West. It’s produced now by women’s cooperatives who gather the fruit straight from the trees in late summer. Producing one litre of argan oil takes 15 hours and 66 pounds of fruit. And the goats are more often a way for locals to make a little money from curious travelers. 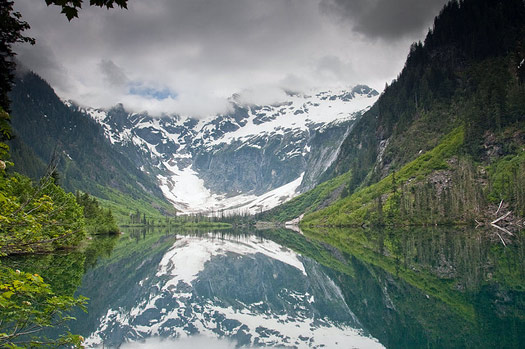 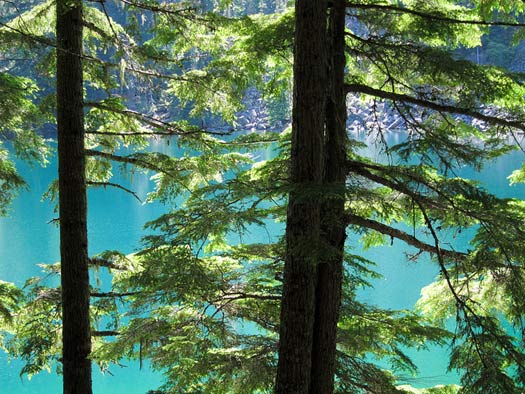 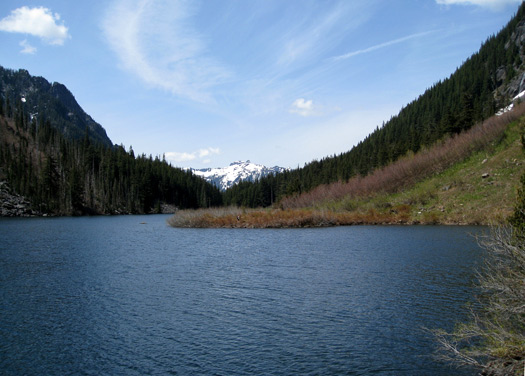 Mount Baker-Snoqualmie National Forest stretches for more than 143 miles from the Canadian border to the northern edge of Mount Rainier National Park.

Goat Lake, located at the Mountain Loop Highway, is a see-it-before-you-die wonderland of green-blue waters, snow-clad peaks and rushing waterfalls. It’s a 10-mile hike round-trip and an easy day trip from Seattle.

Switchback up through the dark and verdant woods. When you hear the rushing of McIntosh Falls, you’ll know almost at the top. The ethereal waters will greet you when you emerge from the forest. There are some camping spots here, but they fill up quickly during the summer months so an early start is recommended. 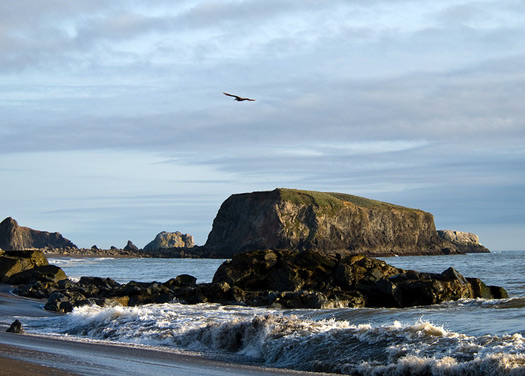 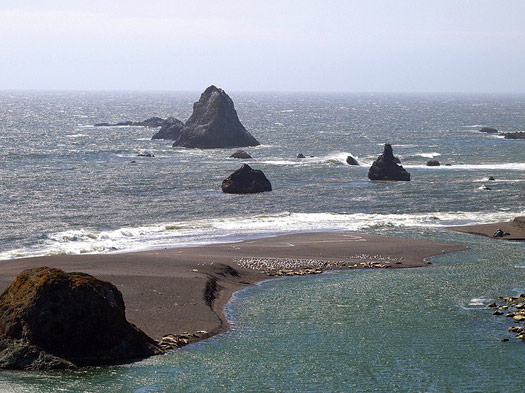 Harbor Seals and Seagulls at the mouth of the Russian River, in Bodega Bay, California. Photo: David Sifry

It takes its name from the goatherds who used the grassy top of the rock to graze goats in the 20th century. Only goats were sure-footed enough to scale the steep sides of the rock.

The beach is popular, especially in mid-summer, with beachcombers, waders, surfers and climbers. It’s also a resting ground for sea otters, elephant seals, sea lions and harbor seals who pup between March and August. 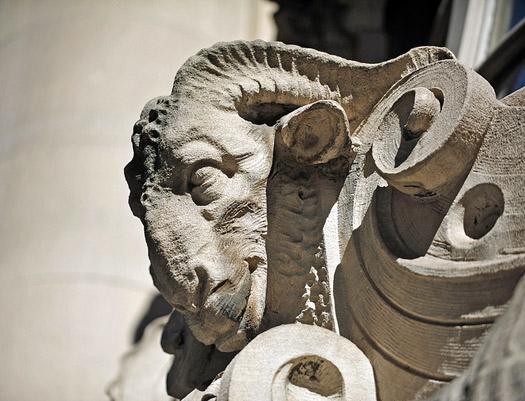 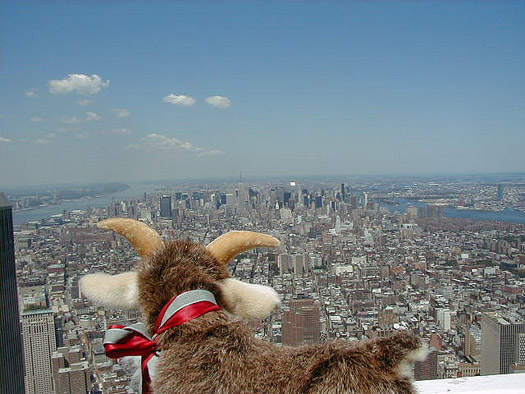 A goat looking out across Gotham AKA New York City. Photo: Neil Rickards 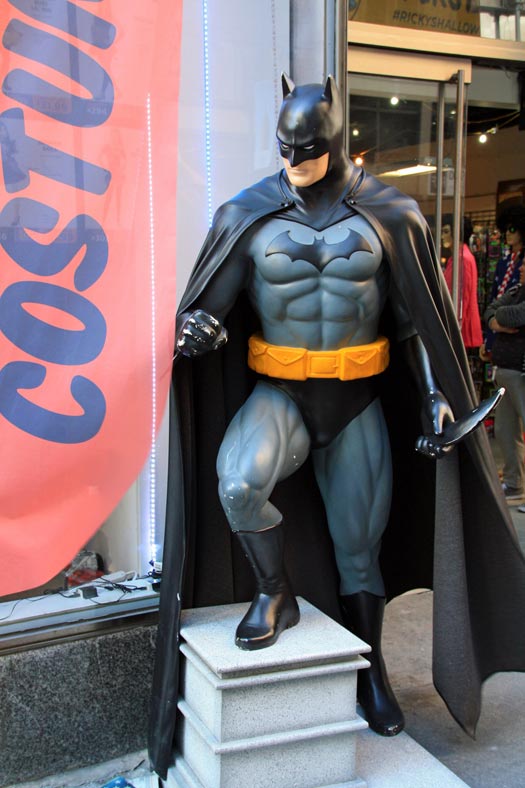 Goats might not be the first thing that springs to mind when you think about New York, but the city has a long association with the animal.

In the late 1930s, when Bill Finger was thinking about changing Batman’s hometown from New York City to a fictional one, he ran through a few options. Civic City, Capital City and Coast City were some of the suggestions. Then he looked through the New York City phone book and saw the name Gotham Jewelers.

Gotham was a well-known nickname for New York City as far back as the 19th century. When Washington Irving in 1807 lampooned New York culture and politics, he took the name Gotham from the village of Gotham, Nottinghamshire, England. That was a place inhabited by fools. Derived from Old English, Gotham means a “homestead where goats are kept”. Batman buffs will know that The Joker (in Detective Comics #880) cites this, telling Batman that the word means “a safe place for goats”. 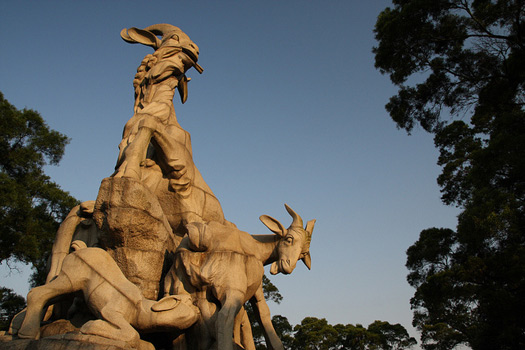 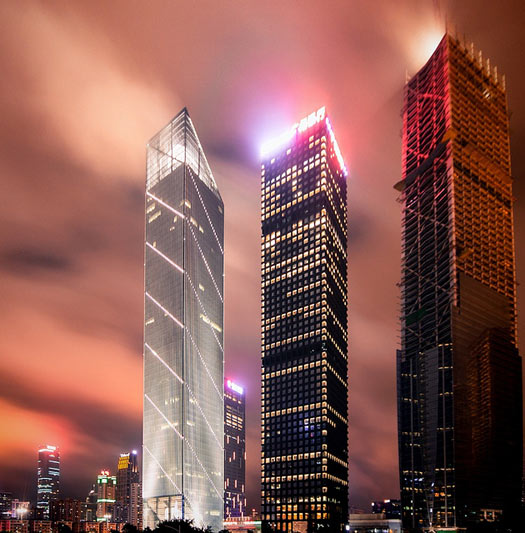 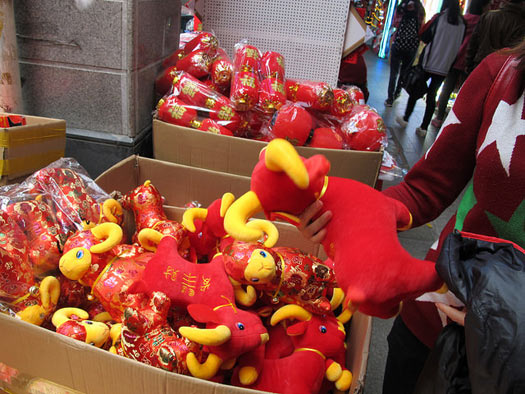 Guangzhou is the third-largest city in China, standing to the north of the Pearl River delta.

Legend has it that during the Zhou Dynasty (1045 B.C. – 256 B.C.) five immortals riding goats descended from heaven, bringing grain to the famine-ravaged city and blessing the area with abundant harvests. To express their gratitude to the immortals, the locals built the “Five Immortals Temple” and established the goat as the symbol of Guangzhou.

Guangzhou has several goat statues, but the Statue of the Five Goats is the most impressive, built in Yuexiou Park in 1959. 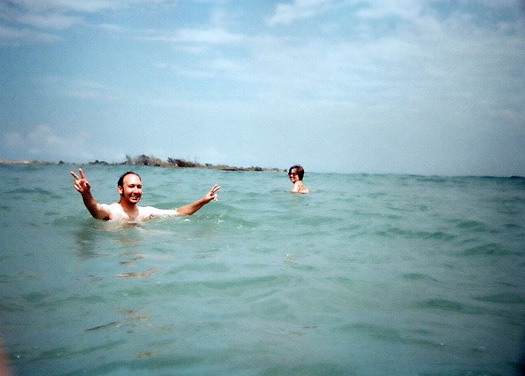 Wading out to Goat Island. About a half mile from shore, by Malaekahana park. Photo: Timothy Tolle 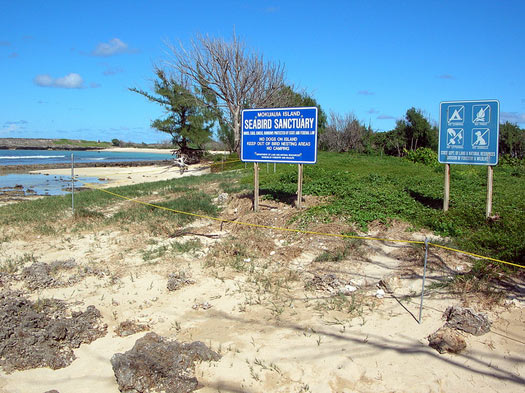 The seabird sanctuary at the centre of Mokuauia, Oahu. Photo: Forest and Kim Starr

Goats were not known on the Hawaiian islands before Captain Cook sailed by in the 18th century. He unleashed goats on the islands in 1778 while Captain Vancouver released some more in 1792-1793. They’re now found in lava fields, by the side of the road, living in the most hostile terrain, eating whatever they find.

Mokuauia or Goat Island is a goat-shaped islet off the northeast coast of Oahu. It’s an uninhabited bird sanctuary that you don’t need a boat to visit. At low tide you can walk there and, at higher tide, it’s a quick swim.

The center of Goat Island is a nature preserve for mating and egg-laying sea birds, but the beach is open access. If you’re walking, wear some shoes or paddle out using a body board or surfboard. 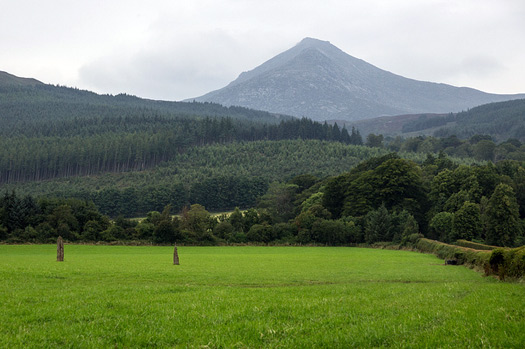 Standing stones and Goat Fell on the Isle of Arran. Photo: User:Colin

The Isle of Arran from the summit of Goat Fell. Photo: User:Colin 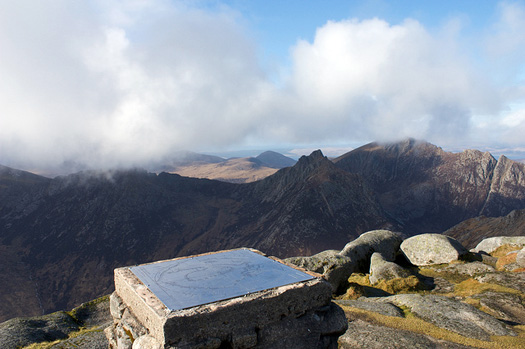 The view from the top of Goat Fell, Isle of Arran. Photo: ㇹヮィㇳ

Goat Fell is the Isle of Arran’s highest point standing at 2, 867 feet. It’s one of four Corbetts on the island and a very popular peak to climb. Visitors reach the island by car ferry from Ardrossan Harbour to Brodick.

A path to the peak starts from near Brodick Castle and is just three miles long. The trail cuts along the mountain’s east ridge through woods and moorland.

There is a viewpoint table at the summit and on a clear day you can see as far as Ireland. 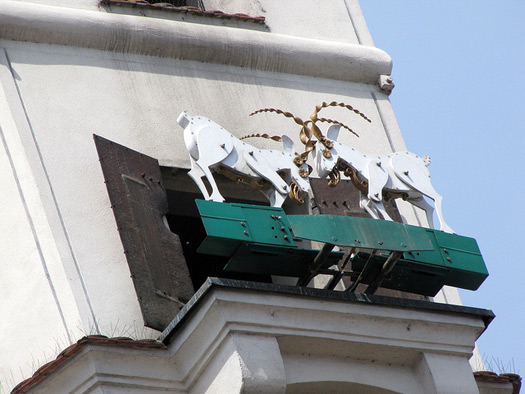 The Town Hall in this city is one of the most striking examples of Renaissance architecture in central Europe.

Each day at 12 o’clock, locals and visitors flock to the Town Hall to see two mechanical billy goats butt heads 12 times. They’ve been knocking their heads together since 1551. Not these ones, obviously. They’ve been replaced and restored over the centuries. This pair is a sprightly 61 years old.

The legend is that way back in 1511 a cook burnt the venison destined the dinner plate of the local ruler or voivode. The cook nabbed a pair of goats by way of replacement. The goats escaped and trotted up the Town Hall tower where they started butting heads – and attracted a large group of onlookers. The voivode pardoned the cook and goats and ordered that mechanical goats be worked into the new clock being built for the tower. 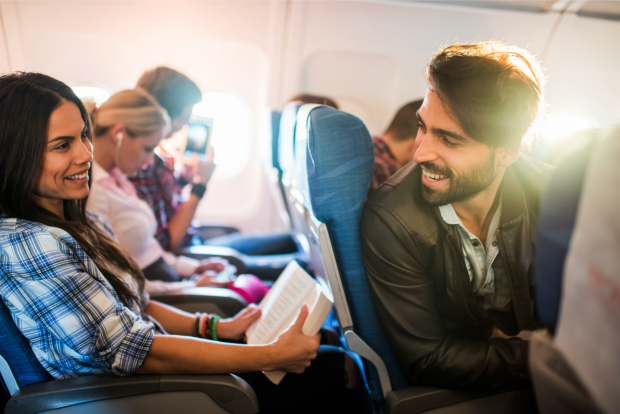 New Year’s Eve with a splash: 10 top beach parties for ringing in 2017

From Australia to Zimbabwe, the world is getting ready to usher in 2017. And with parties taking place in every...
Lauren Mack