What to do in Key West?

The southernmost key of the Florida Keys — a 120-mile chain of islands off the Sunshine State’s southernmost tip — Key West is unlike anywhere else on Earth. The two-by-four-mile island has cultivated a quirky charm and laid-back vibe, making the so-called “Conch Republic” one cool place to visit.

If you’re thinking about a visit to the Sunshine State’s southern gem, now’s the time to go. June is, on average, one of the most affordable months for Key West airfare compared with the rest of the year. And to get you started, we have 52 super cool things to do in Key West that won’t break the bank. Why not hop on a flight and check them out for yourself? Start your flight search on Cheapflights.com and keep reading for all the cheap and free things to do once you’re there.

Search for flights to Key West

Treasure hunter Mel Fisher discovered the “Atocha” off Key West and today visitors can dive to the sunken vessel and explore it for themselves. Afterwards, they can check out The Mel Fisher Maritime Museum, which houses Spanish galleons discovered by Mel Fisher and his crew, as well as a number of exhibits.

No trip to Key West is complete without a walk down Duval Street. Populated with bustling bars and shops, this is the place to eat, drink and shop.

Tender Key West pink shrimp are harvested from the coral sands in the clear waters of the Dry Tortugas from November to June. One of the best places to sample the sweet shrimp, which are recognizable by a distinctive red dot on each pink shell, is Schooner Wharf Bar. The restaurant serves a variety of shrimp dishes, like drunken shrimp, which are taken straight off the boat, then boiled in beer and spices and served chilled. 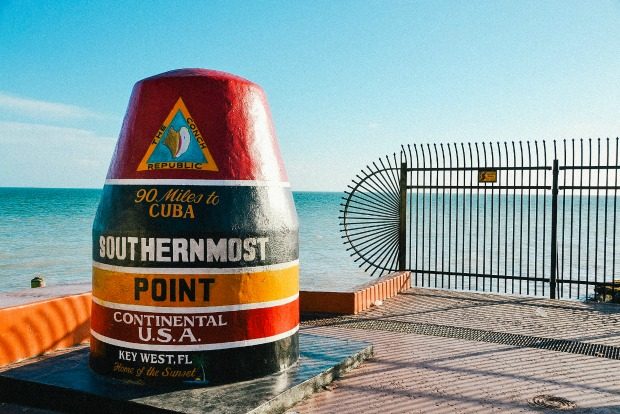 Take a tour of the Hemingway Home and Museum, where Nobel and Pulitzer Prize winner Ernest Hemingway wrote many of his famous works. The grounds are still inhabited by descendants of his six-toed cat.

Buskers congregate among the tourists and locals who converge on Mallory Square to take pictures, people-watch and celebrate the sunset.

The original Rum Runner drink was born out of a challenge: to make a cocktail out of overstock liquor at the Tiki Bar at the Postcard Inn Beach Resort & Marina at Holiday Isle in Islamorada. Plenty of bars in The Keys have added this sundowner to their drink menus, including Pepe’s Café & Steakhouse, the oldest eating house in Key West. The Hog’s Breath Saloon also makes the sunset-colored concoction; a mix of banana liquor, Meyers rum, brandy and grenadine.

Get your passport stamped

Hire a chartered boat and head out to the Marquesas, an uninhabited ring of islands 25 miles west of Key West. The idyllic islands provide up-close encounters with sea life and are popular for game fishing.

The Keys’ signature dessert, Key lime pie, is a must-try. The iconic yellow-hued pie made with limes and condensed milk nestled in a graham cracker crust, is on the menu at many restaurants and bars across The Keys. Try it at Kermit’s Key West Key Lime Shoppe.

The USNS Gen. Hoyt S. Vandenberg transport ship wasthe second largest vessel in the world to be purposely sunk to create an artificial reef. Divers can SCUBA to the artificial reef, which takes over-tourism pressure off of other coral reefs and affords SCUBA divers with alternative dive sights to explore.

With a light, melt-in-your-mouth texture, hogfish is a delicious and popular fish in The Keys – if you can get it. Be on the lookout for the seasonal catch at restaurants across Key West.

Take a ride on the Conch Tour Train, a 90-minute ride through Old Town Key West that allows riders to hop on and off at three stops — Station Depot for shopping and food, Truval Village for the Ernest Hemingway Home and Museum and Southernmost Point Buoy and Flagler Station, right behind Mallory Square.

More than 200,000 LGBTQ visitors travel to Key West each year for fun in the sun as well as annual Pride events like Key West Pride in June and Womenfest in September.

Go to the movies

Get a bird’s eye view

For one of the best views in Key West, climb the 88 steps of the Key West Lighthouse to the observation deck for a bird’s eye view of Key West and the surrounding turquoise waters.

Be a beach bum

Near Duval Street, there is a duo of beaches: Higgs Beach is a popular place to pick up shells and take a dip, while South Beach is a 200-foot-long stretch of sand that’s a peaceful spot to soak up the sunshine.

Get a clear view

Half Shell Raw Bar is a popular place to go for stone crabs, which are harvested offshore and in season from Oct. 15 to May 15.

It’s tradition in The Keys to watch the sunset from Mallory Square, where locals and visitors gather for unobstructed postcard picture views of crimson and gold sunsets.

Sloppy Joe’s has been a beloved bar ever since it opened its doors on Dec. 5, 1933, the day Prohibition was repealed. After several name changes, Sloppy Joe’s current name was encouraged by Ernest Hemingway, a patron of the saloon. The lively bar hosts live music and an annual Hemingway Look-Alike Contest.

Take a time out

The small West Martello Tower is a peaceful and picturesque historic defensive fort. The tranquil space is one of a handful of free tourist sites in Key West.

Traveling with kids in tow? Don’t have a SCUBA dive certificate? Explore colorful coral reefs and sea life via SNUBA, a surface-supplied breathing system which is similar to SCUBA diving but doesn’t require a dive certification and allows children as young as eight years old to participate.

Founded in the early 1800s by Africans migrating from the Bahamas, the neighborhood is home to many cultural sites, including an 1860 African Burial Ground and a Civil War-era fort. It’s also a popular place to eat (don’t miss dining al fresco on Floridian-Caribbean cuisine at Blue Heaven) and shop (score souvenirs at the Bahama Village Market, an outdoor market selling straw hats, seashells and Florida Keys-themed trinkets).

Whether you opt for a sunset sail or a full Caribbean tour, Key West is a cool spot to begin, continue or end a cruise.

Step back in time to 1856 to explore a part of Key West’s maritime heritage at the Key West Shipwreck Treasure Museum. Climb a 65-foot lookout tower, touch a bar of silver from 1656 and see other artifacts from the shipwreck of the Isaac Allerton.

Key West is a highly walkable place. Stop for a street-side snack at Pescado, which serves fresh seafood dishes like the Key West pink po’ boy, with lettuce, tomato, marinated onions and chipotle mayonnaise and a side of fries and coleslaw, washed down with tamarind tea or key limeade; Garbo’s for tacos, burritos, burgers and hot dogs; or Clemente’s, a wood-fired pizzeria housed within a San Francisco trolley car that serves thin-crust Neapolitan pizzas.

Located 70 miles west of Key West, Dry Tortugas National Park is a 100-square-mile park comprised of a remote cluster of seven islands. Only one percent of the national park is dry land. Accessible via a daily ferry, charter boats, private boats and seaplanes, visitors can go swimming on the beaches, snorkeling and diving offshore and explore Fort Jefferson, a 19th-century fort.

From August to April, “Florida lobster” appears on menus across The Keys. Since 1947, locals have dined on the signature lobster thermidor — a dish of spiny lobster medallions served with a thyme and sherry sauce with wild mushrooms and baked with herb-infused panko breadcrumbs — at Alonzo & Berlin’s Lobster House.

From kiteboarding to wave-running and parasailing, there are plenty of ways to have exhilarating fun in the waters surrounding Key West.

Play a round or two of golf at Key West Golf Club, the only Caribbean-style golf course in the U.S. Designed by Rees Jones, Key West Golf Club’s 18-hole, championship-rated public course winds through lush landscape, including the eighth hole, which is situated near a field of tropical mangroves.

Step back in time

Built by Captain John Huling Geiger in the 1840s for his family, the Audubon House and Tropical Gardens is a cool place to step back in time. Visitors can tour the home to see how a wealthy maritime pilot and wrecker once lived.

Board a U.S. Coast Guard Cutter

Tour the U.S. Coast Guard Cutter Ingham Maritime Museum, a national memorial to Coast Guardians who were killed in action in World War II and Vietnam. It’s the only Coast Guard cutter afloat today to received two Presidential Unit Citations for extraordinary heroism in action against an armed enemy.

Open seasonally, the Key West Turtle Museum explains Key West’s maritime history through interactive exhibits and events and recounts the story of how sea turtles were driven to the brink of extinction in The Keys.

Hundreds of dolphins live off the shores of Key West. Book a dolphin safari for the chance to see dolphins jump and swim in the azure waters off Key West.

Go to the theater

Key West has a bustling theater scene. Catch a show most nights of the year at the Waterfront Playhouse, Red Barn Theatre, Tennessee Williams Theatre or Key West Theater.

Learn about the history and culture of Key West through art, architecture and history exhibits at the Key West Museum of Art & History at the Custom House.

Since 1966, this sandal factory has handcrafted leather sandals beloved by locals and visitors alike. In a place with a come-as-you-are attitude, sandals like those at Kino Sandals are the preferred footwear here.

Located at 322 Duval Street, visitors can tour The Oldest House for free. The house features original furnishings, ship models and family portraits from Captain Francis Watlington, his wife Emeline and their nine daughters who lived in the home. The property also boasts the only surviving cookhouse in South Florida.

Named an All-American Road, the Overseas Highway is not only the way to travel from key to key, but is also the perfect spot for watching mesmerizing sunrises.

In a place called the Conch Republic, it’s no surprise that most restaurants have conch on the menu, prepared in a myriad of ways. Head to Sharkey’s for conch fritters — chopped conch meat battered and seasoned with cayenne pepper, bell pepper, celery, garlic and salt, then deep fried — and conch chowder, a spicy, tomato-based comfort food brimming with diced onions, celery, carrots, tomatoes, potatoes, and conch meat. Conch Republic Seafood Company is another great choice for trying this local favorite.

Get sand in your toes

Located where the street meets the beach, knock back some cold ones at Lagerheads Beach Bar. The laid-back beach bar offers sand-in-your-toes dining right on the beach. Pull up a chaise lounge, hop on the bar’s Panama Jack Rum Boat or just sit in the sand and soak up the sun.

Learn about the diverse ecosystem in the Florida Keys at the Florida Keys Eco-Discovery Center. Museum-goers are transported through upland pinelands, hardwood hammocks and beach dunes and through seagrass flats and coral reefs.

Chocolate covered coconut candy is a ubiquitous staple at most shops in Key West. Be sure to sample these sweet shredded coconut patties enrobed in chocolate.

Forgo the typical souvenirs and stock up on local art instead. Just stop by the Guild Hall Gallery, a co-op with 27 artist display spaces where local artists display and sell their art, from pastel painted scenes to sea glass jewelry.

What’s the first thing you would do in Key West? Let us know in the comments and search for flights at Cheapflights.com

Search for flights to Key West