From its war-torn recent past, Sarajevo is fast emerging as a favorite destination for travelers looking to uncover a city like none other on Earth, away from the crowds you’ll usually find in Europe’s most popular cities.

Here are a six things you can to do to guarantee you get the most out of your time in Sarajevo. 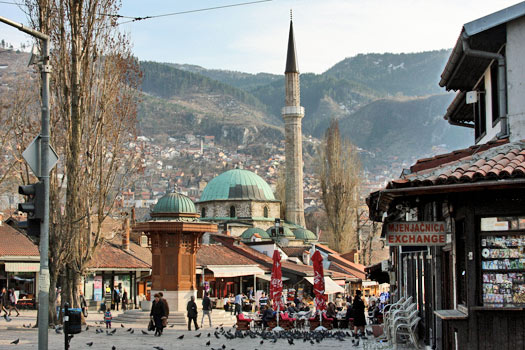 You could always make your own way around this compact city, but if you want to get an in-depth understanding of the city and its people you can’t beat a walking tour with an experienced local guide.

Our guide, Mustafa, is a Sarajevo native, born and raised in the city he clearly loves. He takes us from the bridge-lined Miljacka River where Archduke Franz Ferdinand was assassinated starting World War I through the cobbled streets of Baščaršija in Old Town before moving to the newer sections of the city.

Mustafa was a young teenager during the years of the Sarajevo siege and his tales from this time are both harrowing and humorous – underground classrooms, homes without electricity, dodging snipers on the way home from school.

I never know whether to ask people questions about the war, but the majority of people are happy to answer your questions and actually want to talk about what happened.

Despite – or maybe because of – his experiences, Mustafa wants us to take one word away with us when we think of Sarajevo: tolerance.

Sometimes called the Jerusalem of Europe, it reminded me more of a mini Istanbul with its seamless mix of East meets West. Serbian Orthodox Churches, Croatian Catholic Churches, Bosniak Muslim Mosques and the occasional Jewish Synagogue stand peacefully within a few feet of each other and calls to pray are often sung out against a background of cathedral bells.

The majority of the population are Bosniak Muslim, but even they are a diverse bunch with some living a fairly secular lifestyle and other follow a stricter form of Islam. 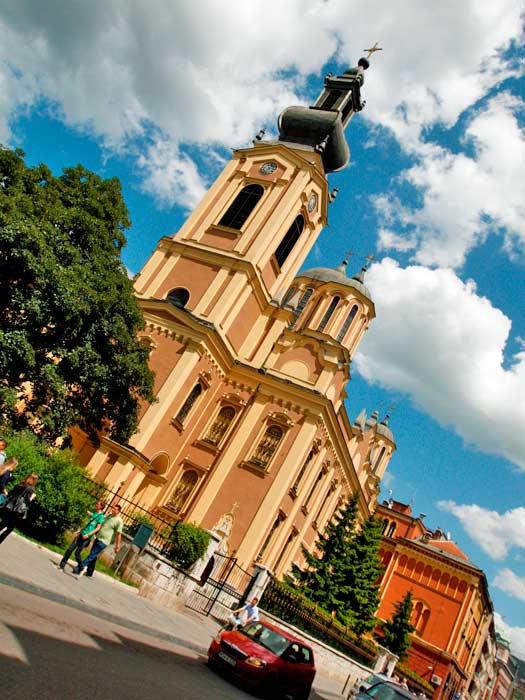 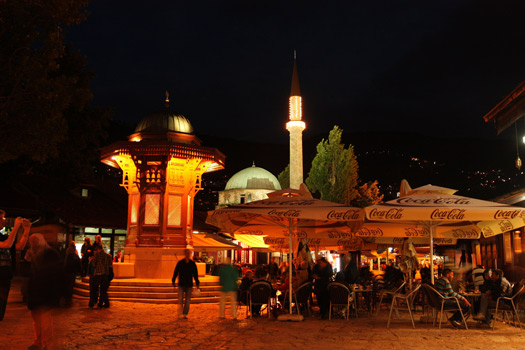 The Sebilj is wooden fountain in the centre of Baščaršija square, Sarajevo. Photo by Balkan Road Trip. 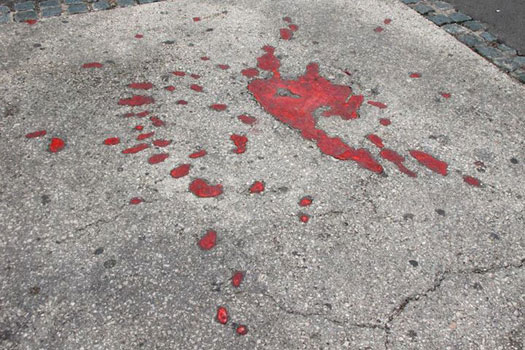 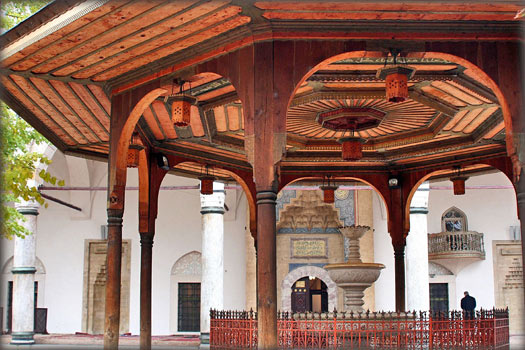 Courtyard to the Baščaršija Mosque, Sarajevo. Photo by Kathleen Franklin. 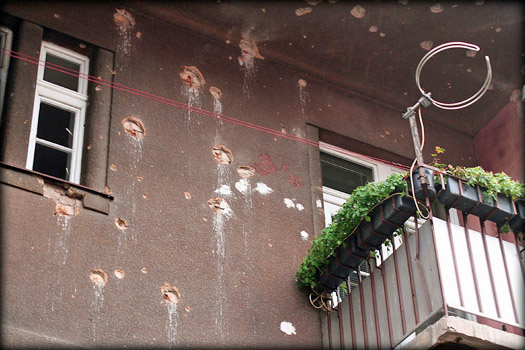 Reminders of the Siege, Sarajevo. Photo by Kathleen Franklin. 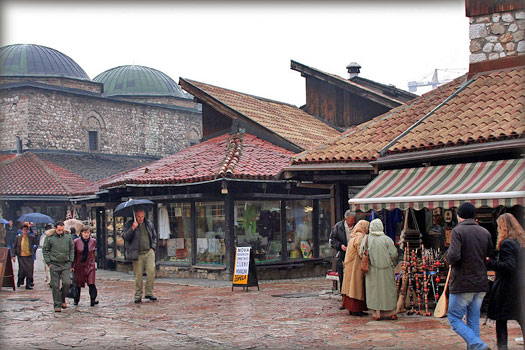 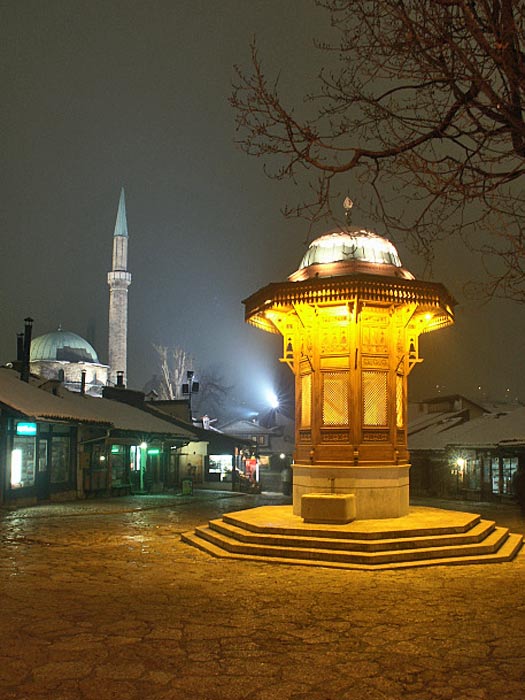 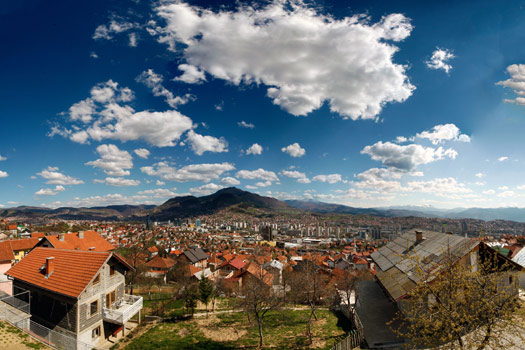 Sarajevo’s various foreign rulers may have come and gone, but they have each left their mark on the local culture and, more visibly, cityscape. From the Ottoman Stari Grad to Austro-Hungarian Centar and Communist influenced Novi Grad and Novo Sarajevo, within 30 mins you can stroll through layers of history.

When it comes to getting to grips with the city’s more recent past Sarajevo’s History Museum is a great place to start.

Not to be confused with the National Museum (now closed thanks to various political differences), the History Museum is housed in the most un-museum looking of locations, but appropriate nonetheless, a bombed out building.

Set over two levels, the lower floor houses a now-and-then photo display of the city while the upper floor focuses on the Yugoslav War and what life was like for citizens living though the Siege of 1992-1996. A moving section on war crimes finishes the display and will stay with you long after you leave. This photo of Sarajevo History Museum is courtesy of TripAdvisor 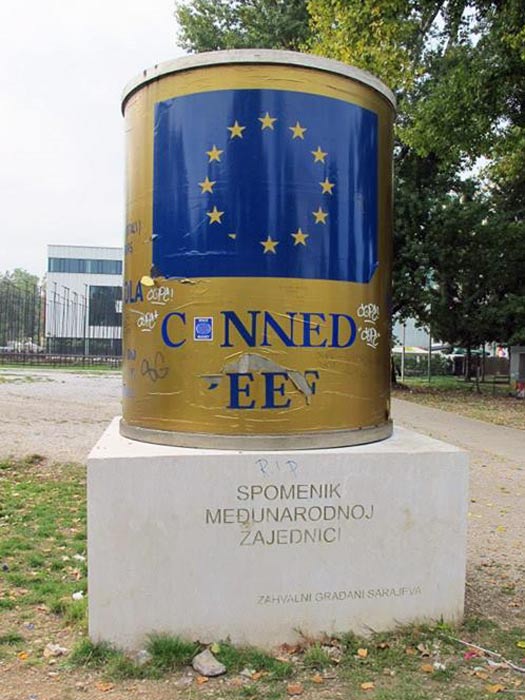 Statue to the famous Canned ‘Beef’ – humanitarian supply that was most likely 99.99% NOT beef at the History Museum. Photo Kara Segedin 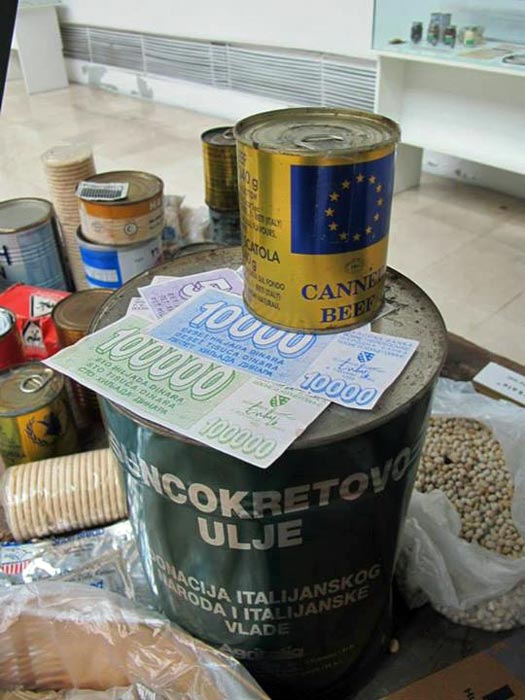 Display of daily life during the war at the History Museum. Photo Kara Segedin

You know you’re in for a good night when the place is buzzing on a Monday.

Cinemas Sloga is a popular nightspot hidden away in center of Sarajevo and is very hard to find without a guide.

Despite it being a weeknight the queue to get in stretched out onto the pavement. Thankfully, Mustafa had booked ahead so we were escorted straight through to our table.

Cinemas Sloga hosts everything from Latin dance nights to local bands, but tonight’s theme was traditional Bosnian music. The crowd was largely young, but there were a few older faces in the mix. A four piece group weaved their way through the audience playing a selection of crowd-pleasing traditional songs with everyone joining in for a good old-fashioned sing-along. The atmosphere was warm and welcoming; everyone had a drink at hand, but nobody seemed drunk.

A word of warning – if are allergic to or bothered by cigarette smoke this might not be the place for you. As indoor smoking is permitted it might get a bit much, however if you can manage a smoky night you’re in for a treat. 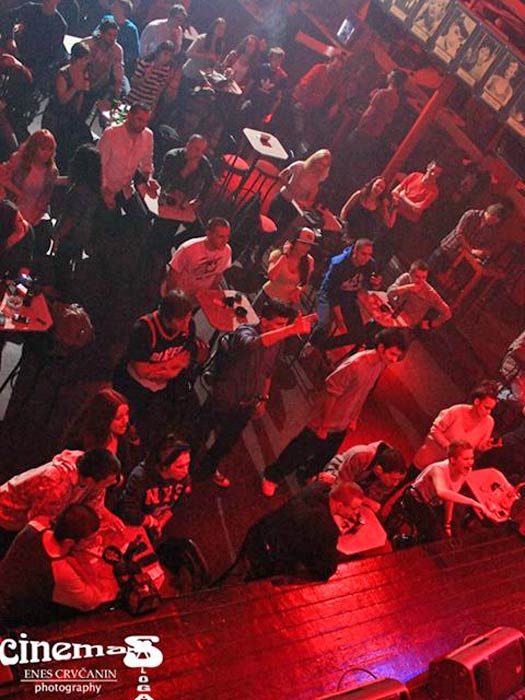 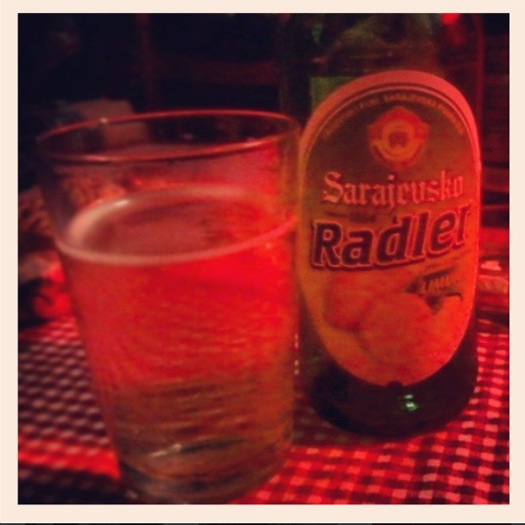 A cold one at Cinemas Sloga Club, Sarajevo. Photo by Kara Segedin

I could write an entire novel on the wonders of Bosnian pie.

What the rest of the world knows as Burek or Borek, in Bosnia refers only to the meat version of this iconic, tasty dish known locally as pita.

Made fresh daily, Bosnian pies are the ultimate in cheap, delicious comfort food.

You can pick up a pie at any pekara (bakery), but make sure you go early as they are made first thing in the morning and always taste best hot. However, you will find fresh pies all day at specialised burekdžnica shops.

The pie is made by rolling giant strips of ultra-thin pastry and cutting it into long strips. Each strip is filled with meat, cheese or vegetables and rolled into a long sausage shape. Then it is rolled up into a tasty pastry snail and cooked in a charcoal oven.

My favourite places were Buregdzinica Sac and Buregdzinica Bosna, but there are dozens of other burekdžnica serving great pita. 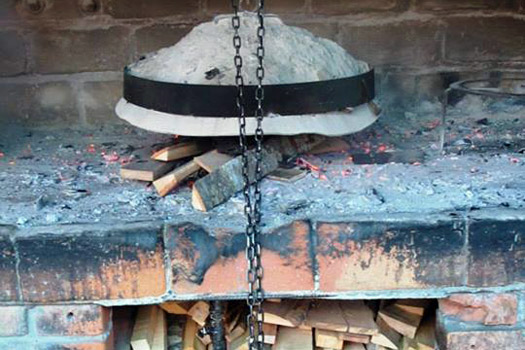 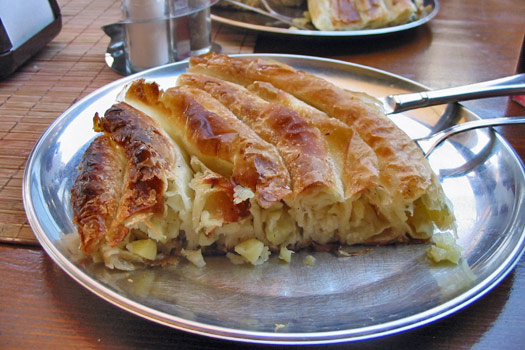 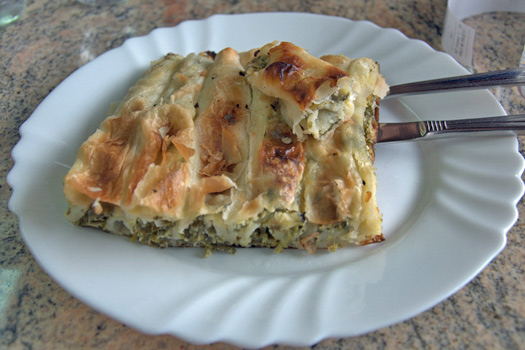 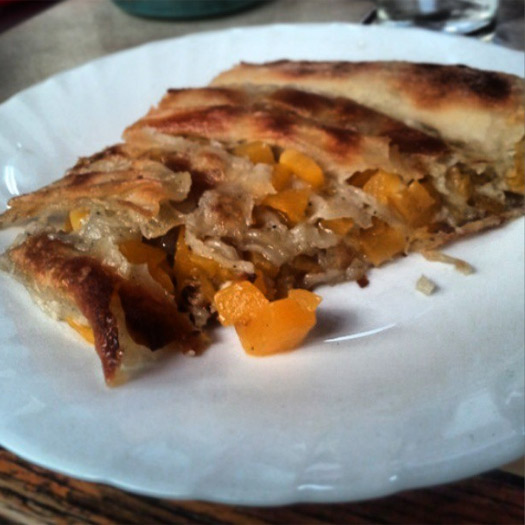 If you want to buy a special and authentic souvenir try something made out of copper from Kazandžiluk (Coppersmith St) such as a traditional coffee grinder, a coffee or tea set, or an engraved shell casing leftover from the war.

My first thought was that these bullet creations were in bad taste, how can you buy something that caused so much destruction? But as our guide, and numerous locals pointed out, it’s the exact opposite. These deadly bullets are turned into a thing of beauty as a symbolic depiction of the victory of peace over war. Youngsters collect used casings from the hills around the city and sell them to the copper-smiths for a bit of extra cash. Then the tradesmen polish and intricately decorate the shells into a true work of art. 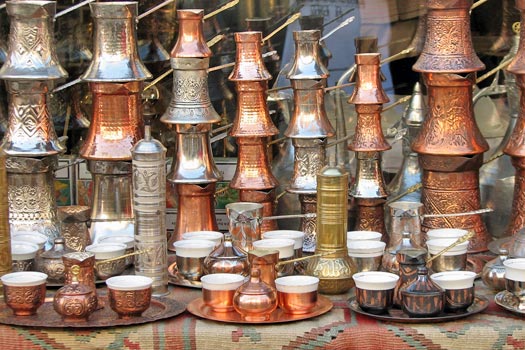 Everything you need to make the perfect Bosnian coffees: grinders, pots and sets. Photo by NH53 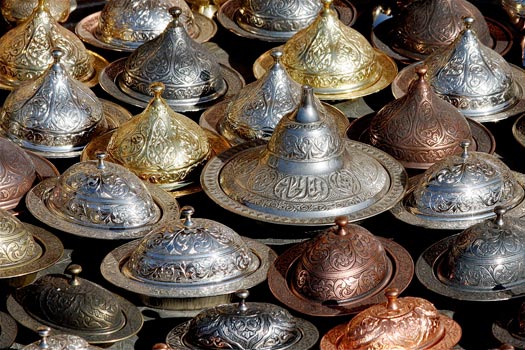 I don’t think there’s a nation on earth who enjoys their coffee quite as much as the Bosnians.

This strong drink is usually served on a traditional copper coffee set with sugar cubes, a glass of cold water and a piece of Turkish Delight. Never with milk.

The coffee comes in a džezva (traditional coffee pot) and you should get about two espresso sized cups out of each pot. Remember to be careful to avoid sipping down a mouthful of the grinds which are left in the bottom of the pot. 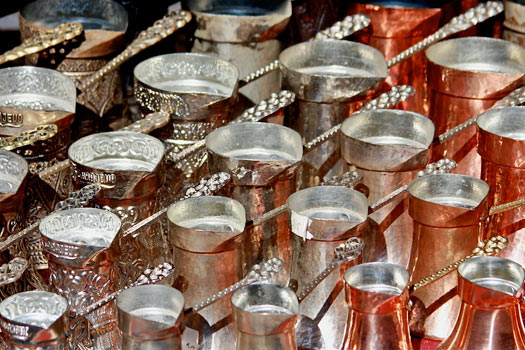 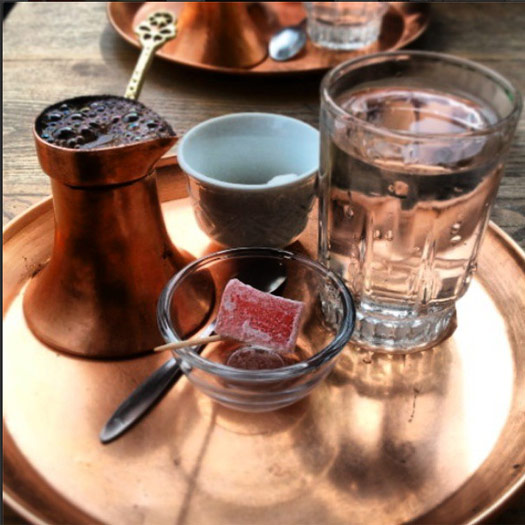 Planning an Asian getaway? We’ve put together this helpful list of airports in Israel to get you started. Our Israeli...
April 15, 2015‐Amanda Festa

Thinking about booking a cruise vacation? We have what you need to get started, save money and have a memorable...
August 15, 2016‐Amanda Festa

Your basic guide to travel insurance

Medical emergencies, theft or cancellations could not only ruin your vacation – they could leave you on the hook for the cost of your spoiled trip.
June 20, 2013‐Marissa Willman

CheapflightsEuropeYour guide to Sarajevo: 6 steps to the perfect trip