If you’ve ever seen the sun set in London, you’ll know that the city’s vibrant pink and orange skies don’t disappoint.

However, there are certain spots in London where the views are particularly special. From bucolic Hampstead Heath to the iconic Shard, these spots will provide the city’s best crepuscular views.

It’s right there in the name – Primrose Hill offers a lofty perch in a pretty park that’s perfect for sunset viewing.

Providing top vistas of London and its sights, the Hill is undeniably popular among the families who live nearby.

Expect large groups of people taking in the colourful skyscape, with a glass of mulled wine on winter nights. 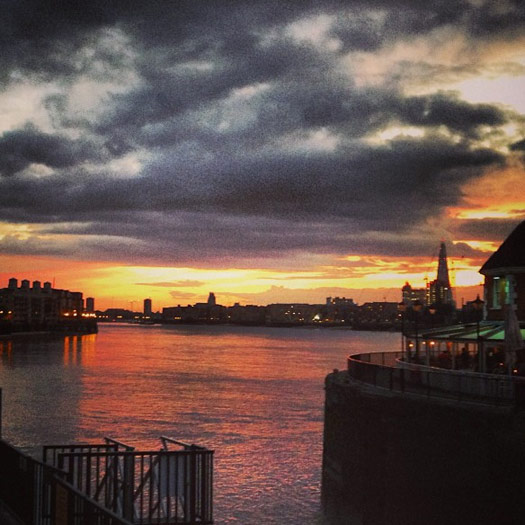 Sunset form Limehouse Lock looking across the Thames to the City. Photo: winniepix

This East End neighborhood can be found northwest of Canary Wharf, right on the river’s bend.

It’s a perfectly tranquil bubble in which to watch the sun descend into the copper waters of the Thames and its muddy banks. A very city-chic option.

Offering more than 196 acres of parkland for perfect for panoramic viewing, this iconic North London venue is the ideal place to soak up the sunset.

With a boating lake, ice rink, pub and restaurant, you can enjoy more than just the last rays of sunshine here.

The View From The Shard

Discover London’s skies from 310m up.

As the tallest building in London, The Shard not only offers epic sunset views over the Big Smoke, but also unlocks the city’s most famous landmarks.

Richmond Park is one of the only spots in London where the scenery is entirely unspoiled by buildings.

Just add a sunset and the scenery is elevated from picturesque to magnificent.

Parliament Hill is Hampstead Heath’s highest point, and as such, offers some pretty spectacular sunset viewing. An almost rural spot, this quiet patch is a great place to watch the sun descend over central London.

Take a river cruise between Westminster and Greenwich, and catch the city’s most famous sights and bridges at sunset. With a complementary drink and canapés, you can’t go wrong.

Heading to London, England? Our London airport guide includes all the information you need to know before you go. Just...
May 13, 2015‐Ryan Clare

Heading to Southend, England? Our Southend airport guide includes all the information you need to know before you go. Just...
May 13, 2015‐Ryan Clare

The lights of London: An evening ride on the London Eye

The Shard may still be in its honeymoon phase, but London's other coveted view - from the London Eye - is still spectacular and unique in the fact that it's constantly - and almost imperceptibly - evolving throughout the 30-minute ride.
February 4, 2013‐Melisse Hinkle

CheapflightsTravel inspirationTop Places to Watch the Sunset in London, England