New York City, the “city that never sleeps,” can be one expensive place. But that doesn’t mean it has to be. There are plenty of cheap and free options in the Big Apple if you know where to look. From museums to shows to dining, our favorite things to do in the Big Apple won’t set you back more than a fiver, and many are free. These options are so cool, you might just find yourself reciting our mantra: if it’s free, it’s for me.

Get ready to LOL 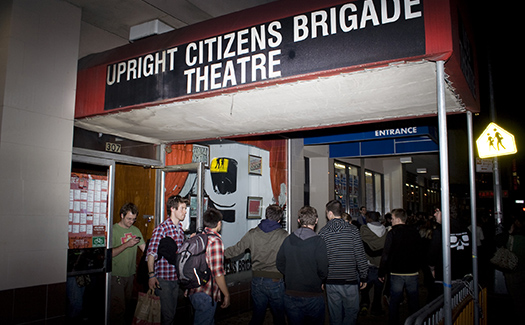 It only takes $5 to score a cheap ticket to see some of the hottest comedians and up-and-coming comedic talent at Upright Citizens Brigade. Celebrity comedians are even known to stop by for impromptu appearances.

Go to a virtual world 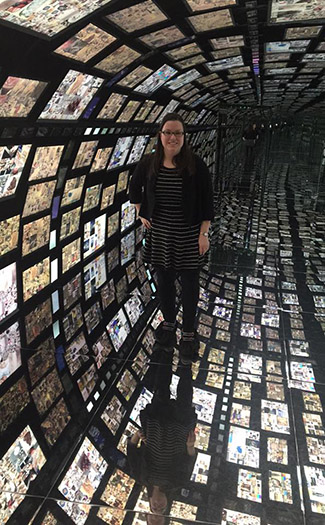 The Samsung 837 is an “un-store.” Visitors can’t buy anything here, except for snacks and coffee at the café, but they can check out virtual reality experiences, take part in interactive art exhibits, and enjoy live musical performances. 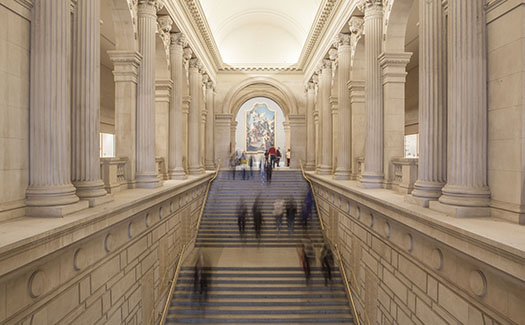 Many of the world’s masterpieces are housed in New York’s famous museums. Many museums open their doors to the public for free on certain days and times. 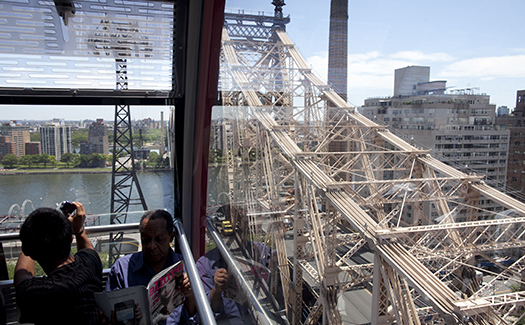 Take a ride on The Tram, the only commuter cable car in North America that whisks riders from the residential island on a four- to five-minute journey over the East River to Manhattan for $2.75 each way. It’s best to avoid the morning and evening rush hours, which are Monday to Friday from 7:00 a.m. to 10:00 a.m. and 3:00 p.m. to 8:00 p.m. If you want to tour around Roosevelt Island, you can hop on the free Red Bus Service, which mirrors the tram schedule.

Shop ’til you drop

Avoid the high-priced trinkets in Times Square and elsewhere and instead peruse the options at the Theatre District Shopping Court. The outdoor pop-up flea market near Times Square at the corner of West 46th Street and Eighth Avenue has stalls crammed with costume jewelry, clothing, bags and toys. And it’s always free to browse. 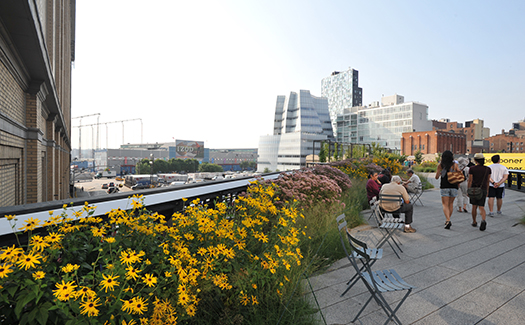 One of New York City’s best and popular walks is The High Line, an elevated park built on an abandoned railway trestle that stretches through three neighborhoods: Clinton/Hell’s Kitchen, West Chelsea and the Meatpacking District. Art installations and gardens punctuate the nearly one-and-a-half-mile-long park. 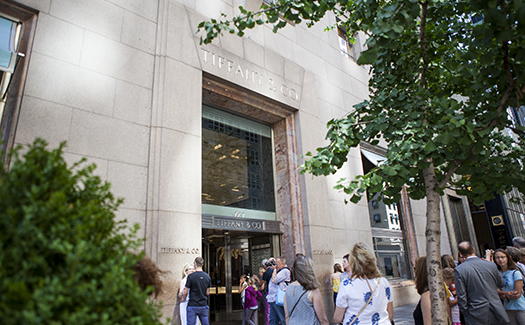 See who was ‘buried’ at Grant’s Tomb

General Grant National Memorial, the largest mausoleum in North America, is the final resting place for President Ulysses S. Grant and his wife, Julia Dent Grant; however, the bodies aren’t below ground, making the answer to Groucho Marx’s often-asked quiz question, “who was buried in Grant’s Tomb?” no one, (because the couple is entombed above ground in an atrium, not buried in the ground). Admission is free. 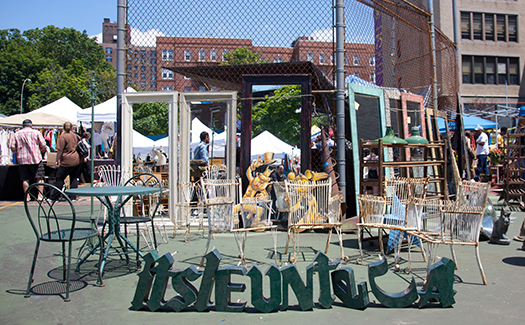 Shop for vintage clothing, bric-à-brac, collectibles, antiques and street food at Brooklyn Flea. From April to October, the flea market is held outdoors rain or shine in Fort Greene on Saturdays and DUMBO on Sundays. Each Brooklyn location also has food from local restaurants and food trucks; from chicken satay and pizza to ice cream sandwiches.

Walk across the Brooklyn Bridge 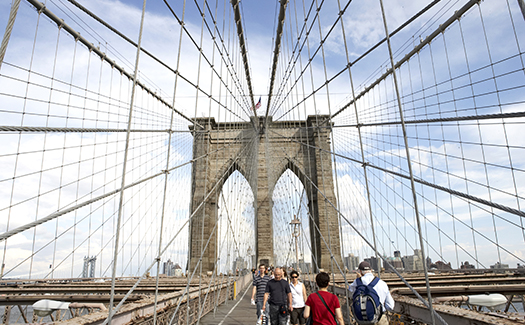 Be sure to see the Brooklyn Bridge. (Image: Alex Lopez/NYC & Company)

Walk or bike across the Brooklyn Bridge, which was the world’s longest suspension bridge when it opened in 1883. The iconic bridge affords a trip and views like no other. 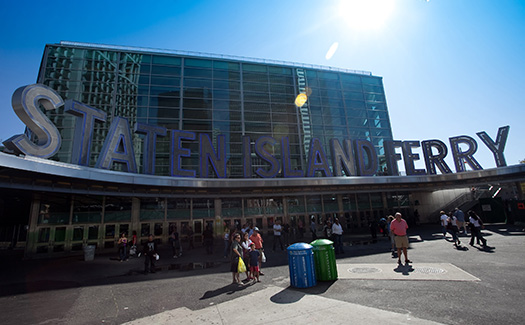 Get an up close and personal view of the Statue of Liberty. (Image: Malcolm Brown/NYC & Company)

Long before New York had bridges, there was the Staten Island Ferry. A fleet of nine ferries takes travelers on a five-mile boat ride from St. George on Staten Island to Whitehall Street in downtown Manhattan in just 25 minutes. Riders get close-up views of the Statue of Liberty and the New York skyline. Avoid taking the ferry during morning and afternoon rush hours (weekdays, 7:00 a.m. to 8:45 a.m. and 5:00 p.m. to 6:45 p.m.) when the boats are packed. Go during off-peak times to get the best seats (the outer decks on the New Jersey side are always packed, but good views and photo ops can also be had from the main deck). 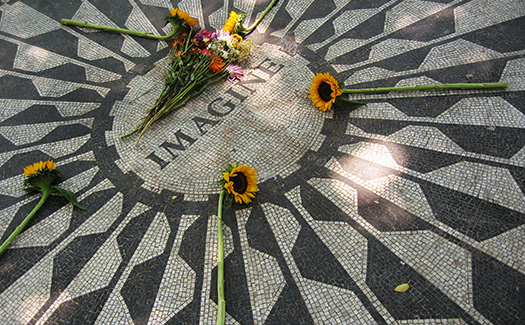 Opened in 1858, Central Park offers much to see and do. Take a ride on one of 57 colorful horses of the whimsical Carousel for $3. Visit The Pond at East 61st Street to see where Holden Caulfield in J.D. Salinger’s classic “Catcher in the Rye” went in search of the ducks. Sing along to John Lennon tunes at Strawberry Fields, a mid-park living memorial to The Beatles band member. And end your tour at Belvedere Castle, a miniature castle that serves as a visitors’ center and outlook over both the Great Lawn, a 55-acre lush lawn to the north, and the Ramble, a 36-acre artificial garden to the south. Located at West 79th Street, Belvedere Castle is the highest point inside the park, perfect for taking panoramic shots and selfies.

Eat a slice of pizza

For more than 50 years, pizza aficionados have lined up along Avenue J in Midwood, Brooklyn for legendary pizza handmade by Dom DeMarco at Di Fara Pizza. Folks sometimes wait hours for a $5 slice, but it’s so worth it. 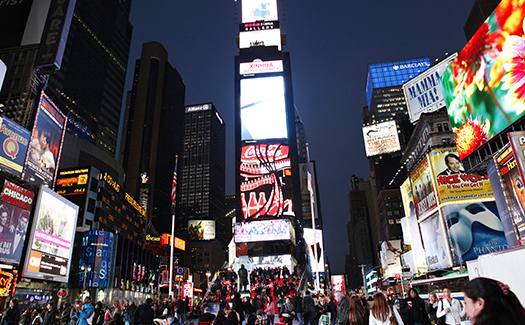 The lights are bright on Broadway and Times Square. (Image: Marley White/NYC & Company)

“The Crossroads of the World” is a must-see during a trip to the Big Apple. Named for “The New York Times,” whose One Times Square address was the newspaper’s headquarters from 1904 to 1913, Times Square is busting with attractions 24/7. Sit on the giant red staircase or pull up a seat in one of the pedestrian zones, the perfect perches for people watching. If you time your visit right – 11:57 p.m. nightly to be exact – you will be treated to “Midnight Moment,” an art display in which more than 15 screens simultaneously shut off their advertisements and display a coordinated work of digital art until the clock strikes midnight.

Being part of a live studio audience is a fun and free way to see celebrities up close and possibly enjoy your 15 minutes of fame on television. Shows like “Last Week Tonight with John Oliver,” “Late Night with Seth Meyers,” “The Late Show with Stephen Colbert,” and “The Tonight Show Starring Jimmy Fallon” all film regularly and require free tickets. While some shows give away tickets on the same days as taping, the chances of getting a seat are limited. It’s better to reserve tickets in advance and arrive early. “Good Morning America” and “The Today Show” don’t require tickets, making it easy to guarantee you get to watch the magic of live television provided you show up early. 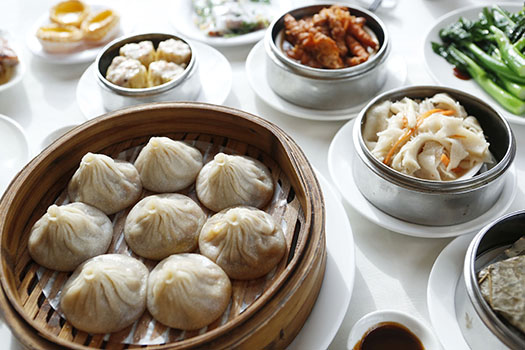 Start the day with dim sum in one of the largest and oldest Chinese communities in the country. Small steamer baskets and plates of savory and sweet snacks like dumplings, steamed buns, spring rolls and egg tarts, generally cheap and sold for $5 or less per portion, are pushed around in metal carts in restaurant dining rooms throughout Chinatown. 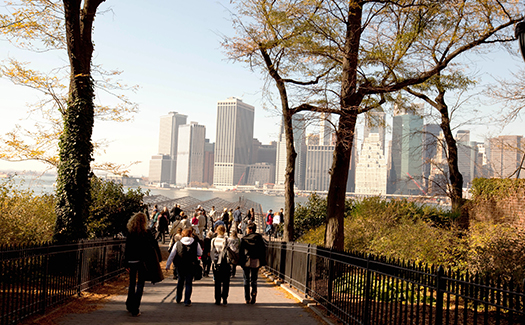 Who needs postcards when there is the Brooklyn Promenade. (Image: Myrna Suarez/NYC & Company)

It won’t cost you a dime to walk the Brooklyn Promenade, a one-third mile-long walkway that affords fantastic views of the New York City skyline, including the Statue of Liberty and Brooklyn Bridge. 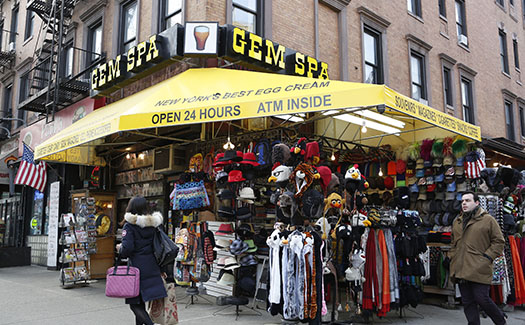 Pull up a seat at the soda fountain for a quintessential New York drink, an egg cream. The soda fountain drink of milk, seltzer and Fox’s U-Bet chocolate syrup is handcrafted at Gem Spa, a soda fountain and newsstand in East Village.

Walk and talk with a local

See the Big Apple from the perspective of a local with Free Tours by Foot. Each tour is approximately two hours and meanders about 1 mile through some of the city’s most iconic neighborhoods. There are 30 New York City tours to choose from, including Lower Manhattan, SoHo, Little Italy, Chinatown, Harlem, and Brooklyn. Whether you choose a walking tour, food tour or bike tour, you pay-what-you-wish at the end.

Dine at a delicatessen 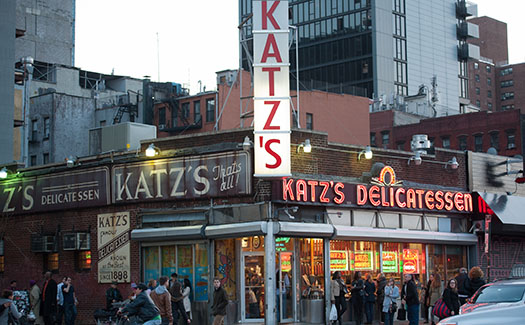 Established in 1888, Katz Delicatessen is an institution in the Lower East Side. While it’s tradition to eat franks and beans, a pastrami on rye, or a corned beef sandwich, all cost more than $5. However, you will need two to three people to eat the extra large portions, so $5 apiece will cover a trio of hungry travelers.

What’s on your list of cheap and free things to do in New York City? Share in the comments and start planning your Big Apple getaway.

CheapflightsCheap & free20 things to do in New York for under $5