The Peninsula Bangkok ranks as one of the best hotels in not just the Thai capital, but the whole of Asia. Don’t take our word for it – it’s got the awards to prove it.

Naturally, the people who run a luxury hotel like the Peninsula never rest on their laurels. They’re constantly asking themselves, ‘How can we make our guests happier?’

When it came to thinking about getting their guests to and from the hotel and around the city, the answer to that question had a smart look, expensive price tag and cool air about it. We’re talking a helipad on the roof enabling helicopter transfers from Suvarnabhumi Airport, four luxuriously decked out riverboats and a legion of Rolls Royce and BMW 7 Series limos. 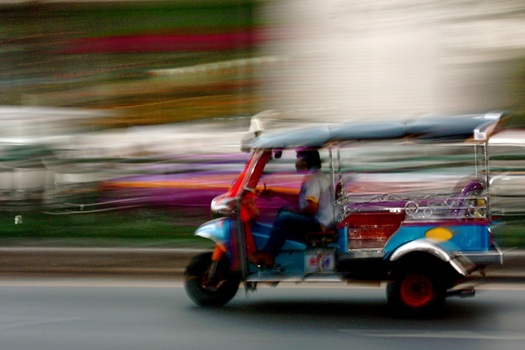 The tuk tuk’s synonymous with Thailand. Since its invention over 50 years ago, the three-wheeled taxi, named for its iconic ‘tuk-tuk-tuk’ engine sound, has been one of the most popular modes of transport in the county.

On first glance, aside from being painted in the hotel’s signature green, the Peninsula’s iteration of the classic open-air vehicle appears not unlike all the other tuk tuks you see thrashing down city streets and beach boulevards around the kingdom.

But up close you soon notice a few special touches; the comfortable tan upholstery mimicking that of the Rolls and Beamer limos for starters. And you’re average tuk tuk certainly doesn’t offer its passengers complimentary Wi-Fi, drinking water and cold towels. Though we sure wish they did!

Heading to Bangkok, Thailand? Our Bangkok airport guide includes all the information you need to know before you go. Just...
April 13, 2015‐Amanda Festa

These beautiful bike rides are worth pedaling for.
March 4, 2014‐Marissa Willman