OK, real talk, travelers: What’s your fav position? The one where you get the most, er, rest.

We’re talking mile-high slumber styles here. Whether you’re a highfalutin First Class Lay…Flat, a sloppy Hoggy Style or an insomnia-ridden Eyes Wide Open, read on to find out which airplane seat sleeping position you’ll assume when you settle in for a snooze fest on your next long-haul flight. 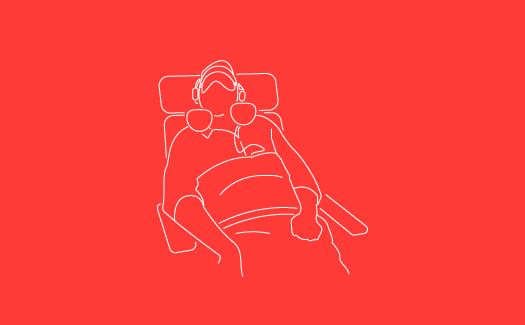 Leave no eye shade behind! ‘Tis the motto of The Mile High-Maintenance Hibernator. These passengers have come prepared, determined to bed down for the long haul against all (uncomfortable) odds. You can catch the Hibernators pre-flight: teeth brushed, glasses on, already clad in pajamas, sporting footwear that can only be classified as slippers. After boarding, they painstakingly carry out their plight to turn their economy class seat into as much of a Barcalounger as humanly possible, collecting all pillows (including the one already around their neck) within arm’s reach, tucking themselves in with the blanket provided, then whipping out the rest of their sleeping accoutrements (think eye shades and cozy socks). If there’s an amenity kit to be had, you can bet they’re digging through it, leaving no complimentary ear plug unturned. 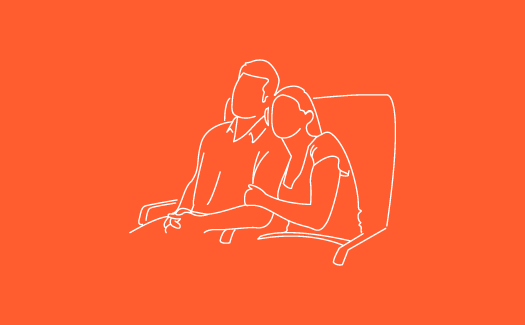 Little spoon, big spoon…whatever size utensil you fancy yourself, this one’s for you, lovers. Sleepy Spooners prefer to take their siestas in the (very) friendly skies locked at the lips, hips and/or fingertips. True, it’s an already-tight squeeze in those airplane seats, but consider yourself a Spooner if you’re getting all cuddle bug up on your love in 12B. Heads resting on shoulders, shared blankets and pillows, a sleeping facial expression that makes it look like they’re about to jump up and lead fellow passengers in a lively rendition of “All You Need is Love”…these are the Spooners’ specialties. The first thing they do? Flip that armrest up and back. After all, no obstacle shall keep them from holding tight to their beloved while catching some z’s. Adventurous amores may even have visions of the mile-high club dancing in their heads, but for the most part this position looks pretty sweet from afar — as long as you’re not the third wheel in 12C. 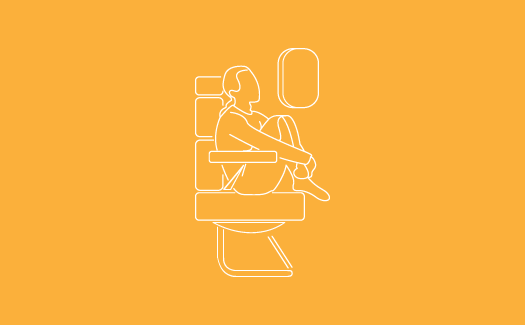 The petite get lucky when it comes to conking out at 37,000 feet: They’re small enough (and/or pliable enough) to somewhat-comfortably curl up – legs and all – even in cramped economy-class conditions. Reserved only for the unusually limber, the Fetal Position is largely assumed by travelers who, let’s face it, could reasonably get some rest by bending themselves into just about any position (making the rest of us feel insanely inadequate in the airplane sleeping sack). Fetal Positions tend to pick window seats, tuck themselves into tiny balls and cozy up to the cabin wall, coming just short of contortionist status (especially in contrast to all the Getting Leggy With Its out there who don’t fool around when it comes to stretching out). For Fetal Positions, this flying land-of-challenging-snoozing conditions is their land of opportunity. Flight attendants may as well tack an addendum onto their safety demo for these uber-flexible flyers: “Welcome aboard. Go forth, pick your preferred sleeping position, and cut all the z’s while the rest of us look on in jealousy.” 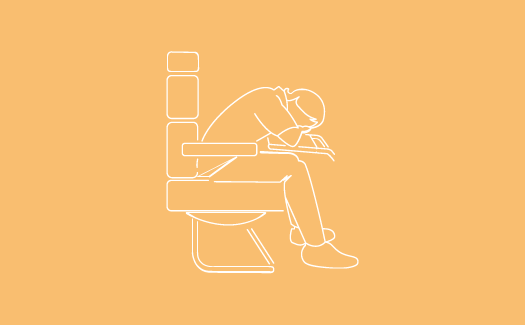 When these jetsetters want to hit the hay, they hit the tray (table). Where fellow passengers see nothing more than a surface for balancing food and laptops, Hit the Tr-hays see glorious plastic pillows. These resourceful resters march aboard their flight, flip down that tray table, sometimes scrounge any semi-soft items nearby and voila: a (not-quite-so-perfect) place to rest their weary heads. After all, unconventional slumbering conditions require a little creativity, and Hit the Tr-hays are just inventive enough to bring it. Hit the Tr-hays may miss out on most airplane meals, but when you’re on a magical flying machine that has served up a ready-made pillow for breakfast, lunch and dinner, why not fill up on an in-flight snooze fest? 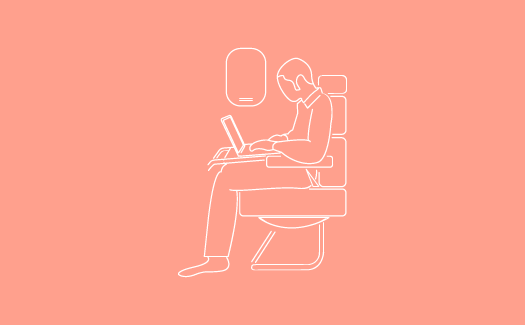 Long-haul flights are a different kind of slumber party for The Eyes Wide Open-ers of the world – the kind made of movie marathons. That’s not to say these in-flight insomniacs haven’t made a valiant effort to snooze sandwiched among armrests, scratchy cushions and strangers. Flight after flight, they’ve tossed and turned in sheer desperation, moving from Hit the Tr-hay to a modified Fetal Position and back again, but no Ostrich Pillow (or stiff drink) has landed them a little shut-eye. And so, wide awake with no sign of the sandman, they’ve resigned themselves to a sleepless life laced with envy, internal debates around when to straddle the person in the aisle seat on the way to the lavatory and a series of needy love affairs with any free and easy in-flight entertainment system. 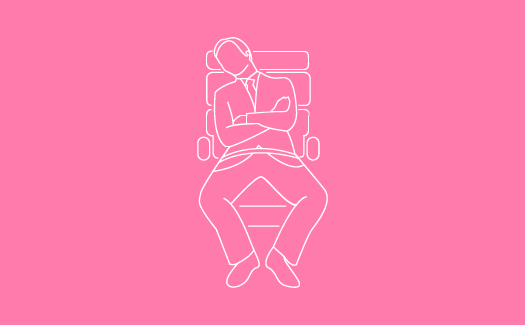 Arms crossed, knees bent, feet on the floor: This is the ultimate upright and locked position. Straight Jackets are those oh-so-fortunate flyers who can nod off sitting straight up — sometimes before the plane even takes off — as all the Eyes Wide Open-ers look on in sleepless disbelief. These adept dozers may seem superhuman (and even a bit smug) perched on their cushion-cum-floatation-device thrones wearing a naptime look that says: “Reclined seats and neck pillows are for the weak.” A Straight Jacket can be hard to spot as they aren’t spending all their in-flight time trying to contort themselves into some semblance of horizontal, but you’ll catch them looking almost rested as they emerge from red eye after red eye, having counted sheep while the rest of us were counting down the hours. 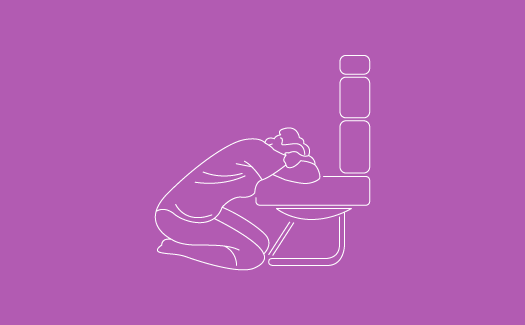 Let us start by saying we’ve only witnessed this position in person a handful of times. And even then we can’t advocate for flying without proper protection (that’s a seatbelt, ladies and gents). But the fact remains, Reverse Passengers are out there. Once the seatbelt light dims, they get up, turn around, kneel on the ground and use their seat cushion as a makeshift pillow. Devious and adventurous, these drowsy flyers don’t play by the typical mile-high shuteye rules. But there’s simply no “do not disturb” sign for this one, and Reverse Passengers should prepare for plenty of reactions to their unorthodox snoozing position, including skeptical looks from fellow passengers and flight attendants requesting they buckle up. After all, they could be in for a pretty wild ride sans seatbelt. 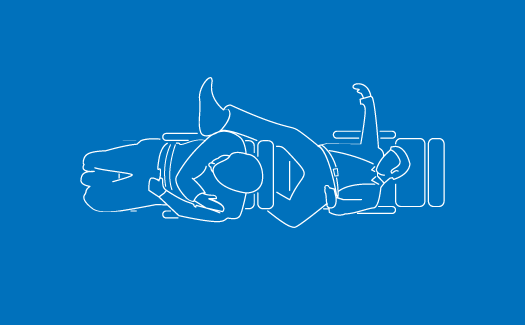 Nobody wants to be the window seat sidekick to an aisle-side Hoggy Style. Simply put, they’re a mess in the in-flight sack. The Hoggy Styles’ signature moves include claiming not one but two armrests as their own, reclining that seat as far back as it will go, propping their bare (and often crusty) feet up on the seat in front of them, and topping off their neighborly activities with a little light snoring. Even if they didn’t start off quite so sloppy, a quick catnap in a cramped coach seat can turn even the best Straight Jacket into a skillful Hoggy Style, forcing passengers on every side to silently pray Emily Post will appear with a quick #airtiquette lesson. The longer the Hoggy Style’s slumber lasts, the more his extremities seem to drift across those invisible-but-oh-so-well-established airplane seat territory lines, taking up residence across an ever-increasing amount of cabin real estate. This is truly the stuff of every neighboring flyer’s fantasies… 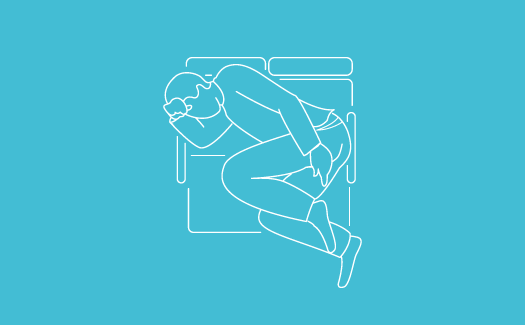 “Wonder of wonders, miracle of miracles!” That’s what the Lucky Lounger whispers to himself when the plane doors close and the realization sets in…he has somehow scored the white buffalo of air travel: an extra empty seat. Nevermind free drinks and swanky amenity kits, when you’re suddenly blessed with an extra 17 inches and you won’t have any Hoggy Styles flailing about next door, things do tend to reach a musical theatre-like happiness level. As the plane pulls away from the gate, you’ll catch Lucky Loungers looking around the cabin as if they’ve gotten away with something extra naughty — or at least feel like they need to know what they did to deserve this good fortune. Then, they’ll hunker down across their very own two-seat piece of airplane paradise. It’s no First Class, but hey, it’s still double the expected inches. 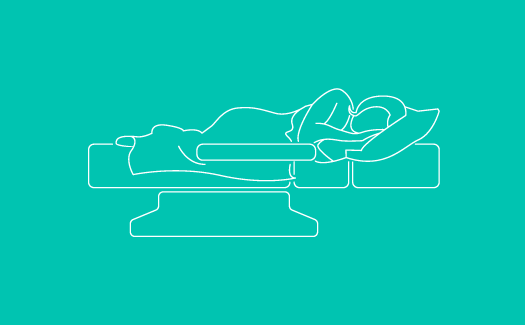 Most flyers will only assume this position in their dreams. A pretty penny or plenty of points — that’s what it’ll take to get a good Lay…Flat these days. First Class Lay…Flats aren’t exactly suffering in the in-flight sleeping department. Hooked up with airplane seats that transform into beds (or at least come pretty darn close), they’re sippin’ bubbly and sailin’ through the skies supine while the rest of us do our best to drift off to a dream state without all those first-class bedtime benefits. A few small whimpers fill the air during the boarding process as flyers get a glimpse of the Lay…Flats settling into their spacious sleeping quarters for a long journey’s nap. The only saving grace for plebeian passengers as they turn toward their Fetal Position-friendly zone? Those “Wizard of Oz”-like curtains that will shield their eyes from their posh front-of-the-plane neighbors during the trip.

Getting Leggy With It 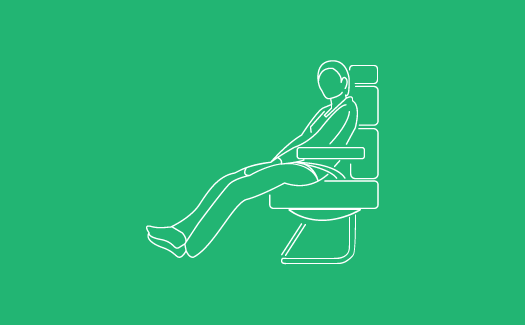 Getting Leggy With It

That seat pitch can be a real you-know-what…amirite? (All the six-foot-somethings of the world just did a collective eye roll in agreement.) These travelers are after just one thing when they’re looking to conk out in this flying land of limited space: extra. legroom. They prefer their legs extended as much as absolutely possible. From bulkheads to exit rows, Getting Leggy With Its have scouted out all the cabin nooks and crannies that offer up even the slightest chance to stretch out their stems. These are the ultimate leg people. Perplexed by The Fetal Position and envious of the First Class Lay…Flats, Getting Leggy With Its often find themselves willing to fork over a few extra bucks for a few extra economy plus inches because, well, tall genes, man.

All illustrations by Jon Lavalley

In-flight fashion has changed dramatically throughout history. From the conservative styles of the 1940s and ’50s to the high heels...
Amanda Festa

A beginner’s guide to the mile-high club

Cheapflights.com would never condone doing anything illegal. Our guide to the mile-high club is only meant for educational purposes  ?✈ What...
Lauren Mack

Staying healthy on the high seas

Going on a cruise is synonymous with a lot of things, but often sticking to a fitness and healthy eating...
Jessica Padykula