Every year Swiss winter resort Samnaum in the Engadin Valley (thanks to Engadin Scuol Samnaum for the featured image, above) hosts the Santa Claus World Championships, or “ClauWau” (the official website is in German).

While everybody competes in a great spirit of humour, there’s a competitive edge to the proceedings. Not least because there are cash prizes for the top teams. Naturally there’s plenty of après-ski action afterwards.

Entry is free, and the competition includes 32 teams of four (male, female or mixed). Teams are pitted against one another in five events (four plus a final round) that test physical endurance, snow-going abilities and Santa skills. 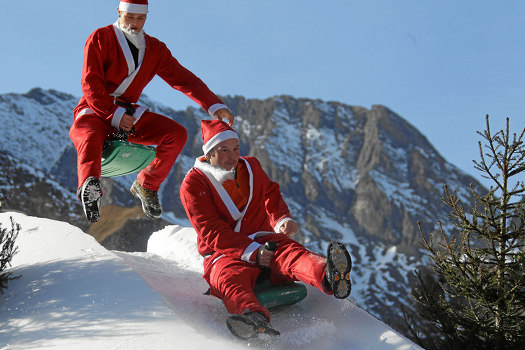 Santa’s Baton
• First team member slides down an obstacle course on a “pigeon” (a small plastic one-person sled) and must pick up an empty Santa sack and pass it onto the snowshoe-wearing second team member, who must pick up a parcel. The third team member then has to slide down the course and collect more packages. Armed with a lance (like a jousting knight), the final team member rides on the back of a snowmobile and tries to skewer another parcel before taking the team’s haul across the finishing line.
• Against the clock (collected parcels equate to time bonuses)
• Two teams run the course at the same time

Santa Clauben
• The whole team crawls under a giant Santa hat (one member must pick up the empty Santa sack in the middle), which they carry in unison down a course lined by hay bales and pine trees – the hat only rises to about knee-level, so the team’s view of the course is severely restricted. Parcels are laid out randomly along the course and can be picked up along the way.
• Against the clock (collected parcels equate to time bonuses)
• Two teams run the course at the same time

Santa’s Skifox
• Each team member is given a Skifox (a little seat attached to a single-ski) and a pair of mini-skis (like regular skis, but shorter). Wearing the mini-skis, they have to climb a hill. Once at the top, they have to get on their Skifoxes and ride down a hay bale-lined course.
• Against the clock – clock stops when last member of the team crosses the line.

Santa’s Chimney Climb
• Each team member must carry a sack of gifts up a ladder and place them at a fireplace on top of a plinth. Once all the gifts have been placed, they must ring a bell then drop the empty sack to the bottom of the plinth. Only when the sack touches the ground can the next team member go.
• Against the clock – clock stops when the last team member rings the bell.

After the first round, there’s a parade of Santas. The team judged to have the best costume wins a cash prize.

Santa’s Final Relay
• The team ranked first takes on the fourth placed team in the first semi-final. Second and third then duke it out for the remaining spot in the grand final. The losers compete in a third-placed playoff.
• Two team members slide on a “pigeon” down a “runway”. When they reach the bottom, the two other team mates set off over an obstacle course, including balance beams and tunnels. The whole team must then work together to push an large wooden sled (Heuschlitten) up a hill, collecting allotted parcels on the way. Then they ride the sled downhill to the finish line. First back wins.

Heading to Santa Ana, California? Our Santa Ana airport guide includes all the information you need to know before you...
April 4, 2015‐Ryan Clare

Happy Lover’s Day! This rather romantic holiday is a fitting celebration for spring, when love is undoubtedly in the air...
April 23, 2014‐Marissa Willman