Until the arrival of the Spanish conquistadores in the 16th century the Zapotec civilization flourished in the Valley of Oaxaca in southern Mexico. Proud guardians of their heritage and culture, the descendants of the first Zapotecs still live in the mountains (the Sierra Norte) of the region today.

With a keen understanding of how their way of life relates to that of the rest of the world, a group of eight villages have resolved to work together for the mutual benefit of their communities. In the first eco-tourism venture recognized by the Mexican government, they have pledged to give equally to, and benefit equally from, tourism in the area. In doing so, all residents commit one month a year to the cooperative’s eco-tourism venture.

Thanks to an incredible network of trails, carved into the Sierra Norte over centuries by the Zapotec for the purposes of communication and trade, it’s possible to tour the eight communities and the gorgeous landscapes they inhabit on mountain bike.

On a weeklong trip you get to ride the magnificent cloud forests of Oaxaca, stay in mountain village cabanas with great eco-tourism credentials and sample the traditional culture and cuisine that this region is renowned for.

Unfortunately this slice of culture and the outdoors doesn’t come cheap. One operator is charging over $2,000 for the tour this October, and that’s excluding flights! 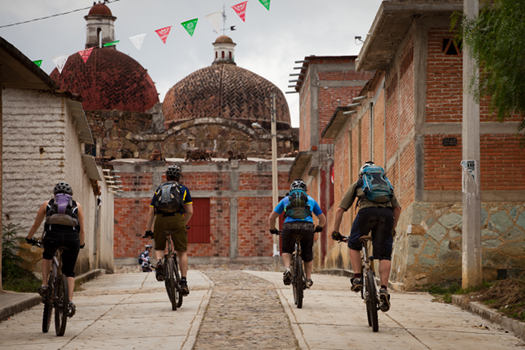 Airport yoga: ‘Down dogs’ before departure

The world’s most scenic drives (Part 1)