When you hear the word doughnut, do you think heavy, greasy and sugary? Think again: The humble dessert staple has now evolved into something truly gourmet. From maple-bacon flavored versions to the ubiquitous Cronut, the modern American doughnut is now an avant-garde foodstuff that pushes culinary boundaries. Here’s a short list of the weirdest and most wonderful doughnut destinations in America today.

For doughnuts that promise to contain a little magic, head to the famous Voodoo Doughnut in Oregon. With two locations in Portland and one in Eugene, Voodoo Doughnut has made a name for itself through bold innovations such as its Maple Bacon Bar (they were some of the first guys on the sweet bacon trend). Getting hitched? Voodoo also hosts weddings, natch.

New York City has been at the forefront of the doughnut revolution and Dough, based in Bed-Stuy, Brooklyn, has helped lead the way. The bakery produces a number of unusual flavors, ranging from blood orange and hibiscus to tropical chilli and strawberry-jalapeño. A second store in Manhattan is rumored to be opening soon, so watch this space.

With two locations in Manhattan and multiple stalls in Japan and Korea, Doughnut Plant proves that the gourmet doughnut trend has gone global. New Yorkers can visit its local branches for flavors as unusual as rose petal, tres leches, and even crème brûlée (with real burnt sugar on top). Delicious.

Traditionalists beware: Glam Doll Donuts does things differently. From the off-kilter peanut butter and sriracha doughnut to the downright strange provolone and müenster combination, the shop’s talented doughnut artisans clearly think outside the box. The hesitant can also choose from one of their more traditional options, including the sensible-yet-delicious orange, ginger & cinnamon-infused specimen.

The no-holds-barred Blue Star Donuts is known for experimenting with sweet and savory flavor combinations. One of their best-selling favorites is the blueberry, bourbon and basil doughnut, as well as one topped with a hearty sprinkling of poppy seeds. The bakery also created a limited edition fried chicken doughnut in honor of National Doughnut Day. Enough said.

If Homer Simpson opened a business, this would be his venture. District Donuts Sliders Brew does what it says on the label: The store sells delicious doughnuts, addictive sliders and excellent coffee. Doughnut varieties include a beer-flavored black and gold doughnut with Lazy Magnolia Stout glaze, and a bizarre concoction of sriracha with candied thyme.

Another Mecca for lovers of the beer-and-doughnut combo, Gourdough’s Public House offers an impressive range of beers to complement a full doughnut service: doughnut sandwiches, doughnut burgers, doughnut entrees, and dessert doughnuts, of course. Is this the future of America’s love affair with the doughnut? We hope so!

Doughnuts here are as strange as they come. Novelties include dog-shaped doughnuts, a blueberry lemon drop specimen (decorated like a psychedelic fried egg), and even a Thanksgiving specialty doughnut that’s topped with turkey and stuffed with cranberry and pineapple.

If you find yourself needing a little more vitamin D in your life, check out the country's sunniest spots.
March 28, 2014‐Marissa Willman 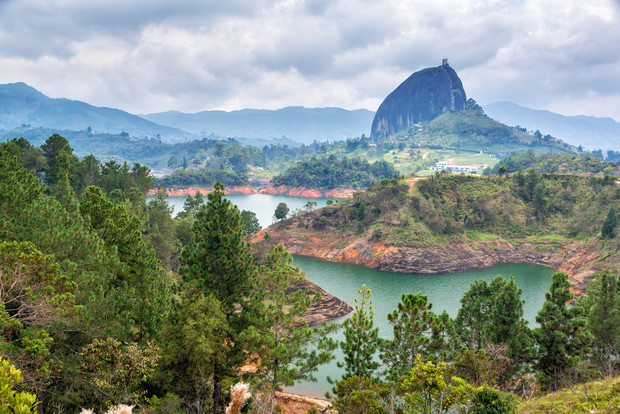 Planning a trip to South America? We’ve put together this helpful list of airports organized by country to get you...
December 31, 2015‐cheapflights

Cool doughnut shops to visit around the US